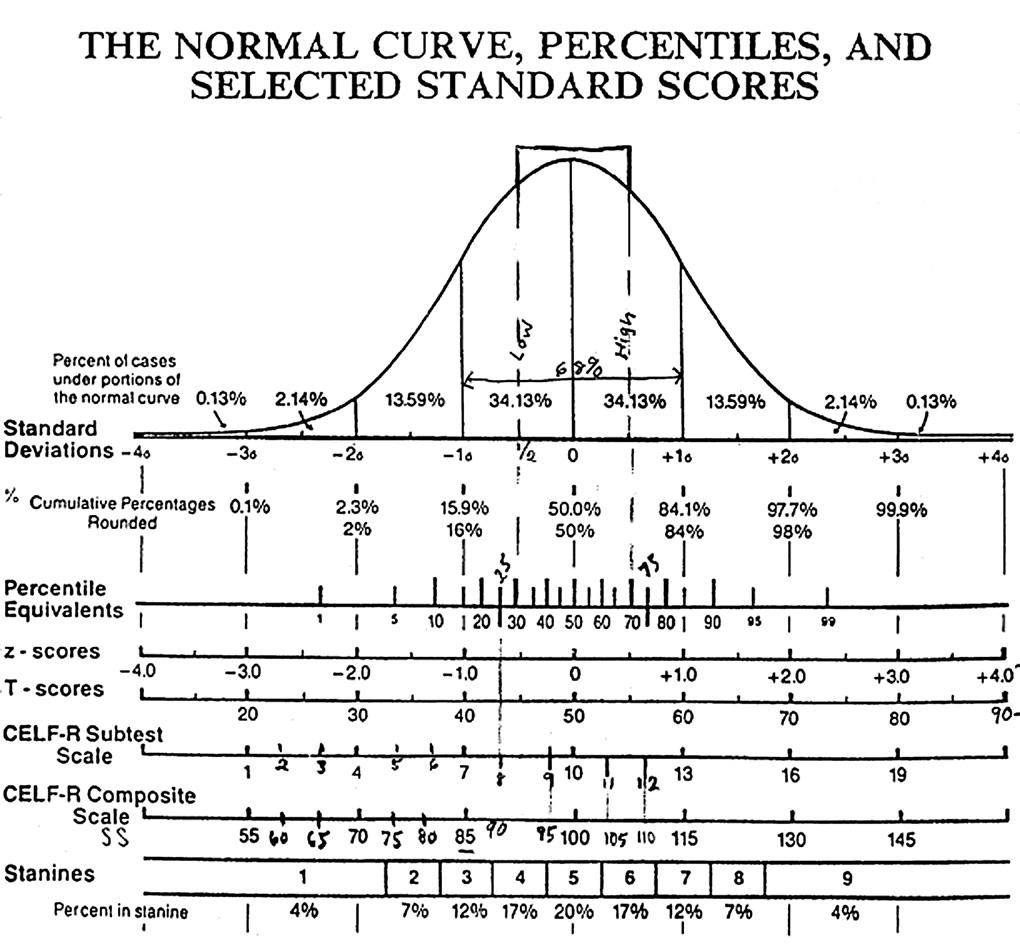 It seems few understand regression to the mean and how and why it works.

Most people (and by most people, I mean most scholars â i.e., the people who should know better) have a vague understanding that it has something to do with IQ. They seem to have the impression it means that the children of smart parents will be less smart. Even more so when those parents come from a population with a low mean IQ.

And they seem to think this phenomenon goes on forever, such that grandchildren and great-grandchildren continue this march to mediocrity.

Well, a lot of this is confused to plain old wrong.

Let’s start with what regression to the mean is. Above is an illustration of a bell curve. A set of parents that lie out on the curve away from the mean will indeed tend to have children that are closer to the average. Hence, if a set of parents are +2 standard deviations for a trait, their children will be typically some degree closer to the mean.

To clear up some additional confusion, let’s look at what causes regression to the mean. The root of the phenomenon goes back to behavioral genetics, or more broadly heritability. Human traits have several components that contribute to trait variance. They are:

The key fact is that for the transmission of a trait from parent to child, only A and C carry over to the next generation. But, as we know, C is 0; so that only leaves A. The rest, including non-additive heredity (which is basically fortuitous combinations of alleles) and whatever remaining “non-genetic” factors that constitute E (and all the things that comprise that, see Environmental Hereditarianism) are essentially luck. And since we can’t expect lightning to strike twice (as improper as that metaphor is), regression to the mean happens because luck goes away.

This is governed by the breeder’s equation.

R is the response to selection, S is the selection differential, and h2 is the narrow-sense heritability. This is the workhorse equation for quantitative genetics. The selective differential S, is the difference between the population mean and the mean of the parental population (some subset of the total population).

This equation can be used in different ways depending on whether we’re talking about whole populations or individual pairs of parents (though fundamentally for the same reason).

Let’s start with individuals. If two parents (let’s say White Americans) are +2Ï for a trait, let’s say IQ, or 130, and we give the additive heritability of IQ to be about 0.6, we can expect their children to collectively have an average IQ of

What’s better, here’s another illustration. Let’s say the parents’ families have a mean IQ of 120, but the parents themselves have IQs of 110. Given the breeder’s equation,

…for a mean IQ of 114 for their children (family mean IQ of +1.333Ï minus 0.4Ï). In other words, even though the parents (with IQs of 110) are above the mean of the population, because their families are well above average, their children regress up.

It’s important to make clear that the breeder’s equation, and hence regression to mean, works the same way for any quantitative trait, not just IQ. This includes political orientation, height, body weight, personality, etc. All you need to know are the values to fit the variables in the equation.

For populations, the equation works similarly. Hence, if a group of people with a mean IQ of 130 (who come from population with a mean IQ of 100) go off somewhere and have children, the next generation will have a mean IQ of 118. Now here’s the part that gives a lot of people trouble: the children of the children of this group, the third generation, will also have a mean IQ of 118. Why? Because the initial event changed the mean. The new “population mean”, as far as the breeder’s equation is concerned, is 118. As long as they mate endogamously, there will be no change in their average IQ thanks to regression (only through selection).

This is should illustrate the flaw in thinking that regression happens forever. If daughter populations regressed back to the mean of their original source populations indefinitely, how could there be any selection for quantitative traits? Think about it.

Now let’s return to individuals. Some think OK, if populations don’t regress forever, surely the descendants of any one pair of parents do, yes? Well, not necessarily. Let’s return to our example of the offspring of IQ 130 parents from mean IQ 120 families. When it comes time for their children (the second generation), with a mean IQ 126, to have children, we do again run the breeder’s equation. But the key fact here is that the mean value the third generation of children are regressing to is the mean of their respective families. If all of the 2nd generation parents mated with spouses from high mean IQ families, there would be little to no regression for the third. In other words, regression to the mean for individuals can be slowed or halted by assortative mating. This is why wealthy parents have concerned themselves with the family backgrounds of their children’s mates. And this is why Gregory Clark found what he found (see The Son Also Rises | West Hunter) â namely, very slow regression (around 10 generations, in many cases) to the population mean for families (indeed, virtually none in Indian castes, who only mate within caste).

Indeed, as I mentioned, the reason for regression is the same for individuals and populations. You see regression in populations because the exceptional individuals who comprise whatever select group in question are going to be coming from families of all different averages for whatever trait under consideration. The sum of all these individual regressions is going to be add up to regression towards the mean of the source population. (But as mentioned before, this only happens once.)

Hopefully, this serves to clear up the confusion on regression to the mean.

Clever people might notice that all of HBD is based on just two concepts: behavioral genetics (or again, more broadly, heritability) and the breeder’s equation. Know those two things and most of the rest follows.

The Five Laws of Behavioral Genetics
Jayman
• 206 Comments • Reply
← Guns, Atheists, Lunatics, and MoreReader Poll 2015. Let Me Hear from You! →
Hide 89 CommentsLeave a Comment
"Regression to the Mean"
• 89 Comments
Commenters to Ignore
Commenters to ignore (one per line)

← Guns, Atheists, Lunatics, and MoreReader Poll 2015. Let Me Hear from You! →
Current Commenter
says:
Current Date at Time Now
Leave a Reply - Comments on articles more than two weeks old will be judged much more strictly on quality and tone
Cancel Reply
Commenting Disabled While in Translation Mode