As some of you know, and probably most of you don’t, I am an atheist.

It is the only logical conclusion based on the principle of demanding proof before regarding things as true, as many would tell you (also here).

That said, some intellectuals would argue that not believing in any sort of creative force leaves a gaping hole in understanding existence, because if so were the case, then how did the universe get into motion (the First Cause problem)? But there are plenty of good reasons to believe that no creator of any sort is necessary for reality to exist.

Many proponents of atheism, like Richard Dawkins (seen here), the late Christopher Hitchens, Daniel Dennett, Sam Harris, and Bill Maher have been actively promoting atheism. They claim that religion has undue influence over society and public policy, which leads to disastrous results. Hence they strive to reduce the influence of religion on politics and public life.

Reformed Muslim Ayaan Hirsi Ali has been leading a campaign against Islam’s brutal subordination of women, which includes practices such as forced marriage and honor killings. These pundits conclude that religion is a greatly destructive force upon humanity, and if people could leave it behind and embrace reasonâas they haveâthe world would be a much better place.

Of course, (most?) HBD’ers know better. The deleterious consequences of religion, especially Christianity and Islam, stem not from the religion in and of themselves, but from the traits of the people who embrace the religion. Of course, as we saw, these religions were instrumental in crafting many of these traits, but it’s not like these traits would suddenly go away if believers were to hypothetically abandon their religion (honor killings exist among Arab Christians, for example).

But then, for the vast majority of believers, abandoning belief isn’t really possible. Religiosity is highly heritable, being highly correlated between twins. As well, religiosity is negatively correlated with IQ, both in individuals and in groups. Believers essentially have “God on the brain”, and most simply can’t help but believe; it’s how their brains are wired. Granted, what, specifically, that is believed likely can hypothetically be replaced, but for most of these individuals, some sort of spiritual belief system is necessary. This includes many intellectuals, whoâdespite being quite intelligent and pretty damned rationalâstill are religious, in defiance of the rationality they use to such great effect otherwise. Being an atheist is really a temperament then, something that comes only to people who are so minded.

As such, it is really pointless to try to “convert” people en mass to atheism, or try to convince someone who holds religious convictions to abandon them; in some cases this is true even for those who seem loosely attached to such beliefs.

Hence, I personally, no longer try. I know that for believers, God is as real as if he was plainly in front us like the Sun in the sky. Their brains simply cannot perceive the world any other way.

Sam Harris seems to realize this. As a neuroscientist, he knows quite a bit about the “brain high on God”. He’s recently written a book, titled Free Will (which I have yet to read), which discusses what I’ve discussed before, where I presume he expands on this notion.

Furthermore, losing belief in God isn’t a solution to any sort of problem that the world currently faces. Charles Murray’s much talked about latest book, Coming Apart: The State of White America, 1960-2010 (which I promise to discuss in depth soon), notes that among the White underclass, church participation is minimal. Now this is involvement in organized institutions, not necessarily belief, which I believe is still quite strong and probably irrevocable.

My earlier post included a map of dominant religious groups in the U.S., and the deeply fundamental strongholds appeared clearly. Fundamental Christianity does seem to be involved in a lot of the inane discussion in American politics as of late, as seen quite evidently during the Republican Presidential primary (which, as Steve Sailer points out, is not completely irrationalâmore on that in a future post). But the attitudes and ideologies adherents hold don’t necessarily stem from their religion, but from their innate biases shaped by the selective forces their ancestors encountered. The “God” part is secondary.

But what then is religious belief good for exactly, evolutionarily speaking? Why do people continue to believe in invisible beings, which is tantamount to having an invisible friend? The secret is that a lot of other people have the same invisible friend.

Religion is first a way of filling in blanks in understanding, answering unanswerable questions, which may be necessary for a species capable of comprehending its environment, for the purposes of mental “completeness” in relating to the world as perceived. It likely served this purpose for most of our species’ evolutionary history. However, it was likely quickly exploited by those who realized that they could use others’ beliefs to their advantage (which is probably as old the first spiritual “healer”). Second, and more importantly, religion is a badge of groupness, a symbol of belonging even better than a facial tattoo. What better way to announce that you’re a committed member of your group than to ascribe to, and truly have faith in, the same intangible beliefs as your compatriots? However, I think this purpose got started much later, since as far as I know, no hunter-gatherer groups fight over differing tribal superstitions.

Rather, the groupness aspect of religion and modest degrees of organization probably appeared, or at least took off, with agriculture, which allowed the growth of permanent settlements and organized leadership. Then, having the correct pantheon of deities could have been an important identifier, especially during regime changes and other shake-ups. We see something like this after the Indo-Europeanization of Bronze Age Greece. The Minoans of Crete seemed to have a fundamentally different sort of beliefs than the much more aggressive Mycenaeans who appeared later.

However, no religion seems to have taken this aspect to the extremes the two most widespread religions, Christianity and Islam, have. Having the right beliefs has been and remains a matter of life and death, and indeed, differencesâeven fairly minor variationsâof religious belief seems to have served as a way of establishing ethnic distinction and solidarity (also see here and here by Steve Sailer). Both of these religions stress the importance of (regardless of what they profess to preach) believingâbelieving the right beliefs, which are symbolized by the right forbidden and approved foods, the right dress….

…and the implicit or explicit inferiority of non-believers. Mind you, neither of these religions are unique in this aspect, as this is true with many group affiliations, including political ones. Groupness is an aspect of human nature; it’s just that religion has discovered an excellent way of solidifying this through the use of irrevocable beliefs (one can say that this is also true of political beliefs). Atheists, who sometimes use fairly loud tactics such as this: 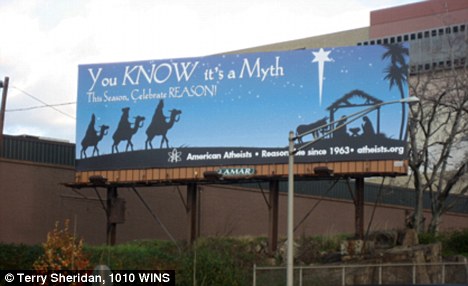 …are seen by the religious as The Enemy, a rival group challenging their faith with another set of beliefs, ironically the lack of belief (which I know is debatable, there is the anti-HBD aspect to most atheism).

This brings us back to the goal the “New Atheists” advocate, which I mentioned at the beginning of this entry. Their goalâhoping for a better society by getting people to give up their irrational religious beliefs and embrace reasonâwhile a highly noble one, is an utterly futile one. Sure, we would be all better off if the world were full of rational, intelligent, irreligious folks that approached policy in a much more logical manner, like the atheist scholars featured here (and presumably were not like Nazis or Marxists), but simply getting people to give up God isn’t going to do the trick. Even assuming that that were possible, these turned believers would still be the same people and would have some other deity or superstition guiding their behavior. Only the forces of evolution, which produced the scholars and accomplished people modern atheists extol, could do the job. Ironically, this occurred in good part because of the influence of Christianity in Northern Europe (as well as in East Asia thanks to somewhat similar forces), as we’ve seen. The Geography of the Noosphere
Anatoly Karlin
• 345 Comments
← Obama Is a Eugenicist!Which Women Grow Closer to Daughters? →
Hide 11 CommentsLeave a Comment
"HBD and Atheism"
• 11 Comments
Commenters to Ignore
Commenters to ignore (one per line)

← Obama Is a Eugenicist!Which Women Grow Closer to Daughters? →
Current Commenter
says:
Current Date at Time Now
Leave a Reply - Comments on articles more than two weeks old will be judged much more strictly on quality and tone
Cancel Reply
Commenting Disabled While in Translation Mode