We got the first pictures from The James Webb space telescope last Tuesday. I watched the NASA one-hour livestream.

If you are not a science geek, it’s hard to explain the excitement of an event like this.

But the presentation of these marvels was of course all warped to conform to our Cultural Revolution. The main presenter was an astronomer named Michelle Thaller. A big majority of her guests were female. (See here, here, here, here, here, and here.) 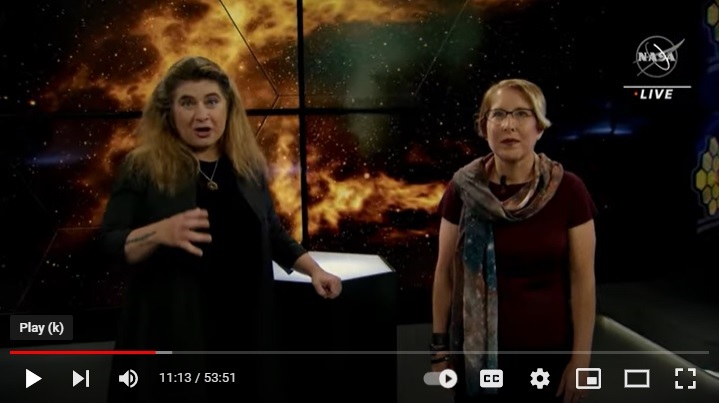 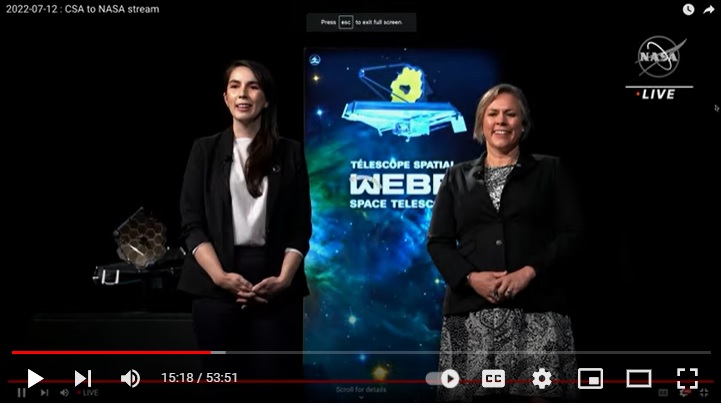 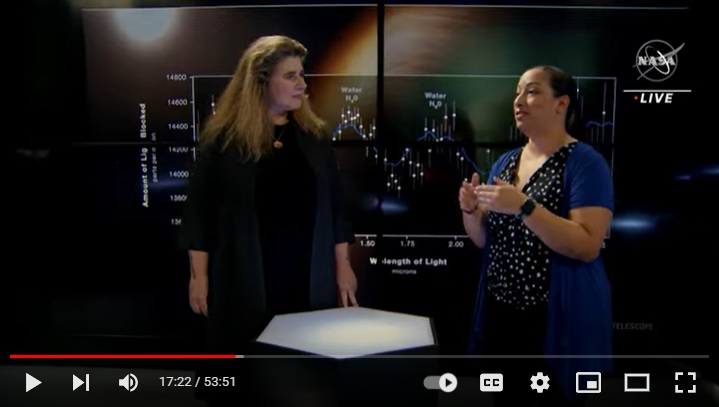 Now look. I have no doubt that some astronomers are women. However, from some slight acquaintance with the higher levels of scientific research, and a fair knowledge of the human sciences, I very seriously doubt that the proportion of astronomers who are female is anything remotely like the proportion presented to us on the NASA livestream Tuesday.

So why was the NASA livestream such a girls’ show?

My own cynicism suggests that NASA originally aimed for perfect Equity, with lots of black astronomers as well as women. Black astronomers are kind of thin on the ground, though. Sure, I know about Neil deGrasse Tyson, but one swallow doesn’t make a summer.

Unable to come up with any blacks, NASA just decided to go all out with the women as a second best.

Whatever. This is propaganda overkill. It’s a regular feature of our Cultural Revolution. They don’t just want to tell you that there are capable women working in hard-science fields like astronomy, which of course is true; they want to bang you over the head with it until you’re down on the floor begging for them to stop.

I got a similar vibe from this week’s news stories about Monticello.

Monticello is of course the estate of Thomas Jefferson in Charlottesville, Virginia, preserved for nearly two hundred years now as a monument to the author of the Declaration of Independence. Monticello is a National Historic Landmark and also a UNESCO World Heritage Site. It’s run by a private non-profit named the Thomas Jefferson Foundation.

Now that Foundation has gone Woke, just like well-nigh every non-profit, every business corporation, every school and college, most of the media and social media, all government departments, and even â Heaven help us! â the Armed Forces.

If you go to visit Monticello in hopes of gaining some understanding of how our nation came to be, brace yourself for a deep-immersion seminar in Critical Race Theory. Thomas Jefferson was, the Thomas Jefferson Foundation wants you to know, a simply terrible person.

And, like NASA pushing all those gals on you, they don’t just mention Jefferson’s defects in passing: they bang you over the head with them until you’re dizzy. One visitor (Jeffrey Tucker, founder of the libertarian Brownstone Institute) told the New York Post that

The whole thing has the feel of propaganda and manipulation â¦ People on my tour seemed sad and demoralized.

1/2 Jefferson has been Great Replaced at his own home, Monticello https://t.co/yrWCePS9zq

Yes, that’s how the Red Guards want us: sad and demoralized. Makes us easier to control, you see?

In contrast, East Asians seem not to bother much with collective guilt. I know plenty of overseas Chinese who are perfectly aware of the horrors of communism; but I have never heard any of them express remorse over, for example, the Dzungar genocide back in the 1750s.

Likewise with the Japanese. Their nation perpetrated some gross atrocities within living memory, but Japanese people seem not to suffer anguished guilt about it. Their government has issued formal apologies when there has been some diplomatic or commercial advantage to be gained by doing so, but you have to wonder if there was any sincerity behind the words. (If there was, wouldn’t the apologist, in the proper Japanese tradition, have closed the proceedings by committing public seppuku?)

And then, the Mongolians. You can make a case that, with due allowance for available population numbers and low levels of killing technology, the worst mass murderer of all time was 13th-century Mongolian warlord Genghis Khan. How do the free Mongolians of today feel about him?

They LOVE him! Mongolia’s main international airport is named after him; so is the country’s premier university; so is the capital city’s main tourist hotel â¦

I must say, when watching a sniveling worm like Antony Blinken writhe and rend his garments over America’s faults and misdeeds, I find myself preferring the more robust East Asian attitude.

Secretary of State Antony Blinken is telling U.S. diplomats to make the promotion of human rights and democracy a priority, even if it means admitting America's own struggles https://t.co/Ra2k1ks7v4

They’re like: “Yeah, we did that. They would probably have done it to us if they could, though. In any case, we’re not doing it any more, so what’s the point of banging on about it?”

Back in the day, when some schoolyard nuisance accused yourself or your family members of some fault or defect and you couldn’t be bothered with a detailed rebuttal, you could shut down the topic by saying: “So’s your old man.”

Behind the smooth diplomacies of those Japanese apologies, or the shrugs of Chinese friends when I mention the wanton killing of missionary wives and children in the Boxer Rebellion, I’m pretty sure I detect some component of “So’s your old man.”

I’m not a totalitarian and I don’t want anything memory-holed.

I would, though, stand up and cheer if, the next time one of those U.N. pests or ChiCom flunkies accused the U.S.A. of historical misdeeds, some appropriate official representative of this Republic would respond publicly and loud with: “So’s your old man.”