Headliner of the week for immigration patriots was President Trumpâs immigration reform proposal, which he sent

to Congress for their perusal last Sunday. The proposal is a very detailed 70-point list under three main headings:

Item-wise, the biggest heading there is the second one, âInterior Enforcement.â Thatâs very welcome.

Of course we need improved border security so that people donât enter our country without permission. That comes under the first heading. An equally pressing problem, though, is the millions of foreigners who are living and working here, and using our schools and hospitals and public services, who should not be here.

This is a major, wonderful improvement in national policy, when you consider that less than a year ago the White House and Justice Department were run by committed open-borders fanatics. I thank the President and his staff for having put so much work into such a detailed proposal for restoring American sovereignty and the rights of American workers and taxpayers.

That said, here come the quibbles.

That third heading, âMerit-Based Immigration System,â with just four items, needs work. Setting aside improvements on visa controls under the other headings, this is really the only part of the proposal that covers legal immigration. In my opinion, it does so imperfectly.

Thereâs some good meat in there, mind. Three of the four items â numbers one, three, and four â got a fist-pump from me:

Good stuff. Item two, however, is a problem. Quote:

Establish a new, points-based system for the awarding of Green Cards (lawful permanent residents) based on factors that allow individuals to successfully assimilate and support themselves financially. 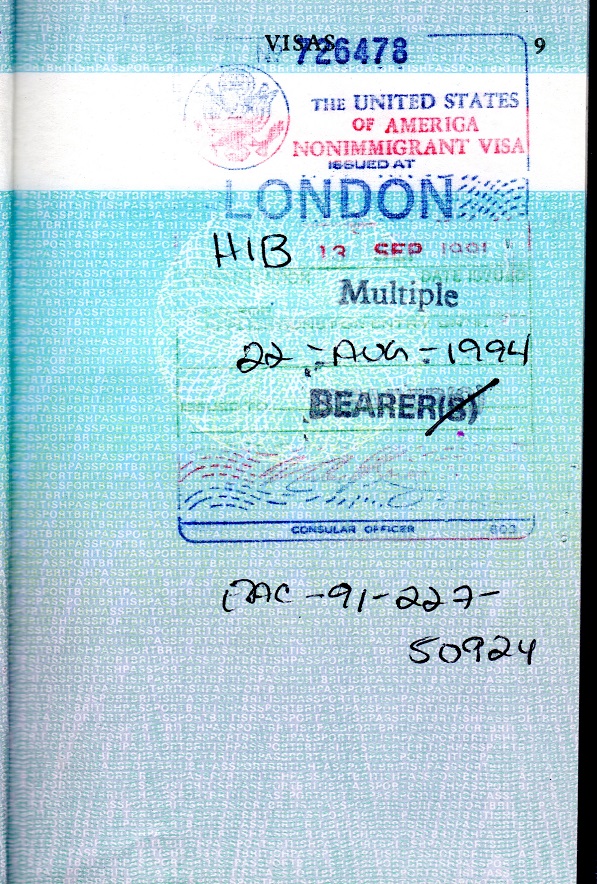 I know: It sounds OK, bringing in talented, well-educated, well-socialized people, rather than what the late Lee Kuan Yew referred to as âfruit-pickers.â Forgive me if I have a rather jaundiced view of this merit-based approach.

For most of my adult life I made a living as a computer programmer. I spent four years doing this in the U.S.A. through the mid-1970s. Then I came back in the late 1980s and worked at the same trade here through the 1990s. (Pictured rightâmy actual H-1B visa) That gave me two clear snapshots twenty years apart, of this particular corner of skilled middle-class employment in America.

In the 1970s a programming shop was legacy American, with only a thin scattering of foreigners like myself. Twenty years later programming had been considerably foreignized, thanks to the H-1B visa program. Now, twenty years further on, I believe legacy-American programmers are an endangered species.

So a well-paid and mentally rewarding corner of the middle-class job market has been handed over to foreigners â for the sole reason, of course, that they are cheaper than Americans. The desire for cheap labor explains 95 percent of U.S. immigration policy. The other five percent is sentimentality.

On so-called âmerit-based immigration,â therefore, you can count me a cynic. I have no doubt that American firms could recruit all the computer programmers they need from among our legacy population. They used to do so, forty years ago. Then they discovered how to game the immigration system for cheaper labor.

Now they are brazen in their crime: you have heard, Iâm sure, those stories about American workers being laid off, with severance packages conditional on their helping train their cheaper foreign replacements. Thatâs our legal immigration system in a nutshell. Itâs a cheap-labor racket.

A âmerit-basedâ points system wonât fix that. It will quickly and easily be gamed by employers to lay waste yet more middle-class occupational zones for Americans. If it was restricted to the higher levels of âmerit,â we would just be importing a professional overclass of foreigners, most East and South Asians, to direct the labors of less-meritorious legacy Americans. How would that contribute to social harmony?

With coming up to a third of a billion people, the U.S.A. has all the talent, all the merit, it needs. You might make a case for a handful of certified geniuses like Einstein or worthy dissidents like Solzhenitsyn, but those cases aside, there is no reason at all to have guest-worker programs. They should all be shut down.

Some of these cheap-labor rackets donât even need congressional action to shut them down; it can be done by regulatory change via executive order. The scandalous OPT-visa scam, for example, which brings in cheap workers under the guise of student visas.

Measured by the number of workers per year, the largest guestworker program in the entire immigration system is now student visas through the Optional Practical Training program (OPT). Last year over 154,000 aliens were approved to work on student visas. By comparison, 114,000 aliens entered the workforce on H-1B guestworker visas.

Because there is no reporting on how long guestworkers stay in the country, we do not know the total number of workers in each category. Nonetheless, the number of approvals for work on student visas has grown by 62 percent over the past four years so their numbers will soon dwarf those on H-1B visas.

The troubling fact is that the OPT program was created entirely through regulation with no authorization from Congress whatsoever. [A History of the âOptional Practical Trainingâ Guestworker Program, CIS, September 18, 2017]

End quote. (And a cheery wave of acknowledgement to John Miano here from one of the other seventeen people in the U.S.A. that knows the correct placement of the hyphen in âH-1B.â)

Our legal immigration system is addled with these scams. Donât even get me started on the EB-5 investorâs visa. It all needs sweeping away.

So for preference I would rewrite that third heading to include, yes, items one, three, and four â cutting down chain migration, ending the Diversity Visa Lottery, and ending refugee settlement for anyone of less stature than Solzhenitsyn; but then, Iâd replace item two with the following:

So much for my amendments to the Presidentâs October 8th proposals. There is, though, one glaring omission from that 70-item list. The proposal has no mention at all of birthright citizenship. In a world of cheap, easy international travel, birthright citizenship is an anachronism. Most developed nations that had it twenty years ago have abandoned it. It leads to obstetric tourism: women well-advanced in pregnancy come to the U.S.A. to give birth, knowing that the child will be a U.S. citizen. It is deeply unpopular with Americans, once itâs explained to them.

Yes, yes, I know: some constitutional authorities argue that birthright citizenship is implied in the Fourteenth Amendment, although it is certain that the framers of that Amendment did not have foreign tourists or illegal entrants in mind. Other scholars think Congress could legislate against it.

The only way to find out is to have Congress legislate. If the courts strike down the legislation as unconstitutional, letâs then frame a constitutional amendment and put it to the people.

Getting rid of birthright citizenship might end up a long and difficult process. We might ultimately fail. The only way to find out is to get the process started. Failure to mention this in the Presidentâs proposal is a very glaring omission.

Setting aside that, and the aforementioned reservations about working visas, I give two cheers to the proposal.