There’s another anniversary this September besides the 20th anniversary of 9/11: Fifty years ago this weekend, and also encompassing a weekend, September 9th to 13th, there occurred the Attica prison riot in western upstate New York. The final death toll for those five days was 43: thirty-three inmates of the prison and ten guards and other civilians.

The September issue of Chronicles magazine has a very fine article by Nicholas Jackson commemorating the anniversary. It makes the key point that the riot was not caused by a tightening of prison discipline, but on the contrary by a loosening.

Political scientists have often noted that authoritarian governments are most in danger of being overthrown when they try to liberalize. People get used to repression and learn to cope with it; but loosening up signals a lack of confidence among the rulers, and that gets people thinking, and rebelling.

Michael Gorbachev’s policies of glasnost and perestroikaâ”opening” and “restructuring” make the point: just as they were getting to be household words, the U.S.S.R. fell apart. The careers of Hu Yaobang and Zhao Ziyang in China, leading up to the 1989 protests in Tiananmen Square and elsewhere, would have made the same point if Deng Xiaoping hadn’t sent in the tanks.

So it was with the Attica riot. New York State’s governor at the time was Nelson Rockefeller, who was as liberal as a Republican can be without falling off the edge of the Earth. His Corrections Commissioner, Russell Oswald, was of the same stamp.

Quote from Nicholas Jackson in Chronicles:

The riot and hostage siege occurred because violent felons had been fortified and encouraged by progressive and liberal concessions in the previous decadeâwhile, by the same concessions, wardens and guards were fettered, shackled, enfeebled, and incapacitated.

So social reformers of the 1960s had been showing the same kind indulgence towards prison inmates as we are showing today towards criminals and rioters; and the same stern harshness towards corrections officers, as we today are showing towards police. If you want to know where current trends are leading, Attica offers a clue.

In his fine 1942 essay on Rudyard Kipling, George Orwell wrote the following thing

He [that is, Kipling] sees clearly that men can only be highly civilized while other men, inevitably less civilized, are there to guard and feed them.

That is a key insight into human affairs; but unfortunately it is one we have become deeply reluctant to contemplate. As part of our current flight from reality, we would much, much rather not think about the fact that an essential part of the maintenance of any civilized society is, that some people must be treated harshly: deprived of their liberty, made to sleep on hard beds in bare cells, put under strict rules of discipline with penalties of extra harshness if they break that discipline, sometimes physically manhandled.

I have mentioned before a friend I had back in England forty years ago who had been a probation officer. He’d spent considerable time in prisons dealing with the inmates. He was a decent man: good company, well-mannered and well-read, a man of broad sympathies. Very few of those sympathies extended to the prison inmates, though. For the most part, he detested them. He summarized them as: “The sad, the bad, and the mad.”

The sad were not much in evidence in the Attica riot, to judge from Nicholas Jackson’s account. This was the Bad and the Mad on one side, on the other the prison guards, concerning whom Jackson tells us, quote:

Their only sin was doing their low-status, low-wage, yet highly hazardous, more-dangerous-than-thankless job. Indeed, salaries of guards at Attica were so low that many of them also held part-time jobs in the small town to make ends meet.

From the pictures in Jackson’s article it seems that the great majority of the rioting inmates were black.

What began as an impromptu and uncoordinated eruption of violence in an upstate New York prison soon morphed into a hostage crisis and siege that gripped the nation and claimed the lives of 43 people. https://t.co/zrTwV5qVk6

I’d guess that most of the corrections officers, if not all, were white. Certainly all the dead guards listed on the Officer Down Memorial Page were white:

That means that the story of the riot can be twisted to fit the narrative that white liberal Americans never tire of hearing told: the evergreen American narrative of brutish low-class whites being mean to harmless, innocent, soulful blacks. 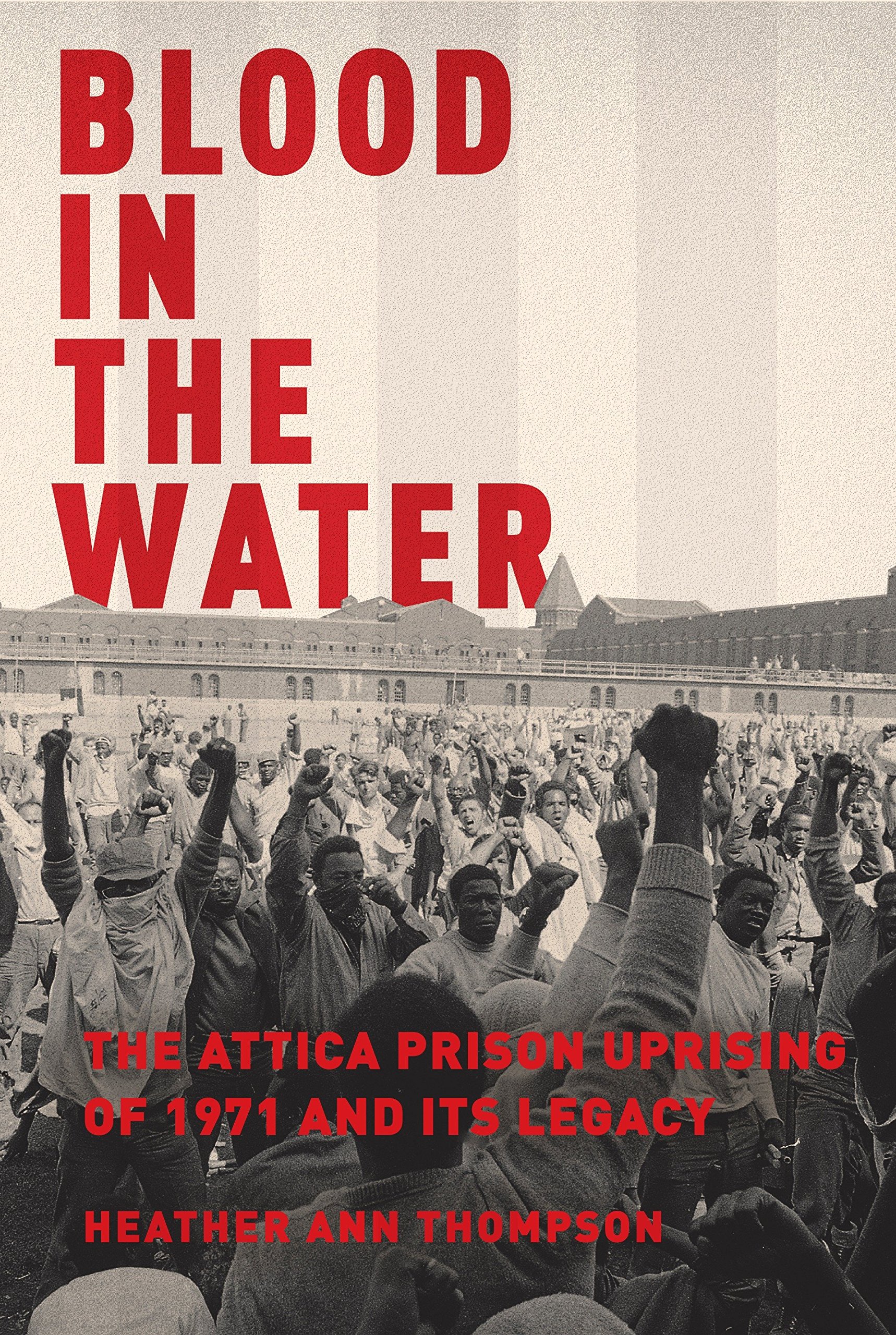 According to Jackson, the story has been thus twisted by left-wing lawyer Elizabeth Fink and left-wing author Heather Ann Thompson [Tweet her] who wrote Blood in the Water: The Attica Prison Uprising of 1971 and Its Legacy. The efforts of these two women, and undoubtedly others, brought millions of dollars in payouts to convicts who’d rioted[ Elizabeth Fink, lawyer who helped Attica inmates win settlement, dies at 70, Washington Post, September 25, 2015]. Readers familiar with the Central Park Five travesty will recognize the terrain here.

But liberals never learn anything. The main jail here in New York City is Rikers Island, a huge facility for 10,000 inmatesâmost on pre-trial or preventive detention, the rest convicts serving short sentences.

Rikers has been getting a really bad press recently: inmates having drug and booze parties accompanied by rap music, savage fights, mass resignations of officers.

What, as liberals ask about crime, what is the root cause?

Maintaining safety and security in New York City’s jails begins with maintaining proper staffing levels â¦ the number of Correction Officers has dwindled down to less than 7,600, including the nearly 1,300 Correction Officers who have resigned since 2019 because of the horrific conditions Mayor de Blasio’s negligence has created.

Could Rikers Island be the next Attica? Nobody would be much surprised. In jailhouse riots, New York leads the way!

Critical Race Theory and the Jewish Project
Gilad Atzmon
• 250 Comments • Reply
← "Miss England" and "Miss Ireland" Are B...The Del Rio TX Disasterâ"Like Watchin... →
Hide 27 CommentsLeave a Comment
"The Attica Riot 50 Years Ago Was Caused Not By Repression, But By LOOSENING Prison Discipline"
• 27 Comments
Commenters to Ignore
Commenters to ignore (one per line)

In the Name of Humanitarianism, Our Response to Covid Is Crushing Solidarity
Jonathan Cook • September 16, 2021
• 2,100 Words • 89 Comments • Reply