Martin Luther King Day, just passed, is depressing because it reminds us of a thing that weâespecially we of the Silent and Boomer cohortsâwould rather not be reminded of.

We remember the hopes of sixty years ago: the hopes that MLK allegedly represented. We remember hoping that if legal segregation was ended and unjust laws struck down, if black Americans were given the same access to life’s good things as everyone else, if manners and language were reformed to show blacks the same respect every other citizen got, then the whole accursed race business would melt away and no-one would any longer give it any mind.

Here we are sixty years later. No more schools and housing districts segregated by law; no more crazy laws to make it hard for blacks to vote; no more separate drinking fountains; no more “boy” or “spook” or n-word; sit where you like in a bus or a diner; go to whichever beach or public swimming pool you please; â¦ The things we wanted done back in those days of hope have all been done long since.

Yet we are more bitterly racialized than ever.

Two stories from this week’s newsâfrom what, in my podcast this week, I refer to as “the damn crazy fever-inducing imbecilities put forth by the news outlets.”

You thought I was kidding? Read on:

(And that’s just for starters. The proposal proposes handouts to eligible blacks for at least 250 years).

Under Sheila Jackson Lee’s law, if it were to pass, any criticism of any non-white person or groupâof Sheila Jackson Lee, for instance, or Black Lives Matterâwould be incitement to a federal hate crime. If the criticism was voiced on Social Media and anyone agreed with it, that would be conspiracy to commit a federal crime.

Concerning San Francisco’s reparations proposal, our own Steve Sailer tossed and gored the thing over at Taki’s Magazine. I won’t attempt to compete with Steve in scathing commentary, I’ll just quote him:

That blacks, after 59 years of aggressive government programs to help them, are still almost as much in need might logically suggests something about black responsibility for their own current state.

But that is unthinkable.

There are no longer any acceptable explanations for racial disparities other than white badness and bad whiteness.

That is a real decline, a real ongoing enstupidation in the human sciences.

An equivalent in the physical sciences would be a descent from blaming earthquakes on the movements of molten rock below the Earth’s crust, to blaming them on restless underground dragons turning in their sleep, to blaming them on corruption in the imperial court.

Still, for those of us who remember those early hopes, the hopes that MLK voiced and encouragedâwhether sincerely or not, make up your own mind on thatâthe Western world of today presents a miserable spectacle.

And the wretchedness of the black underclass is not the worst aspect of that spectacle. The worst is the sight of white people cringing and moaning, flagellating themselves in manufactured remorse, sitting dumb and receptive as hired grifters berate them for their evil nature and the crimes of their ancestors, nodding along in agreement with Dr Heinz Kiosk: “We are guilty! We are all guilty!”

No, we haven’t vanquished the race problem. If anything we have only inflamed it. All those hopes of our youth have come to nothingâto less than nothing.

When weâmy generationâare gone, will anyone remember those hopesâ¦other than to laugh bitterly at them?

And not only is the intractable race business still with us, it is metastasizing. We are, by foolish policies, importing yet more race problems to add to the big one we have so utterly failed to solve.

I was just looking at this latest table from the U.S. Census Bureau on “Median Household Income in the United States by Ethnic Group.”

This chart totally obliterates the woke narrative about race in America: pic.twitter.com/XlAdAosczp

There are some questions I’d want cleared up there. Are those Filipino-Americans at number two Polynesian-Filipinos like (I think) Michelle Malkin, or Chinese-Filipinos like Amy Chua? Similarly with Malaysian-, Indonesian-, and Thai-Americans.

And what about my own household? Do we count as White-American or Chinese-American? If we’re white, could we please upgrade to Chinese? We could use the extra dollars.

A friend with whom I discussed this chart was more impertinent than I would even think of being. “What about Jewish-Americans?” he asked. 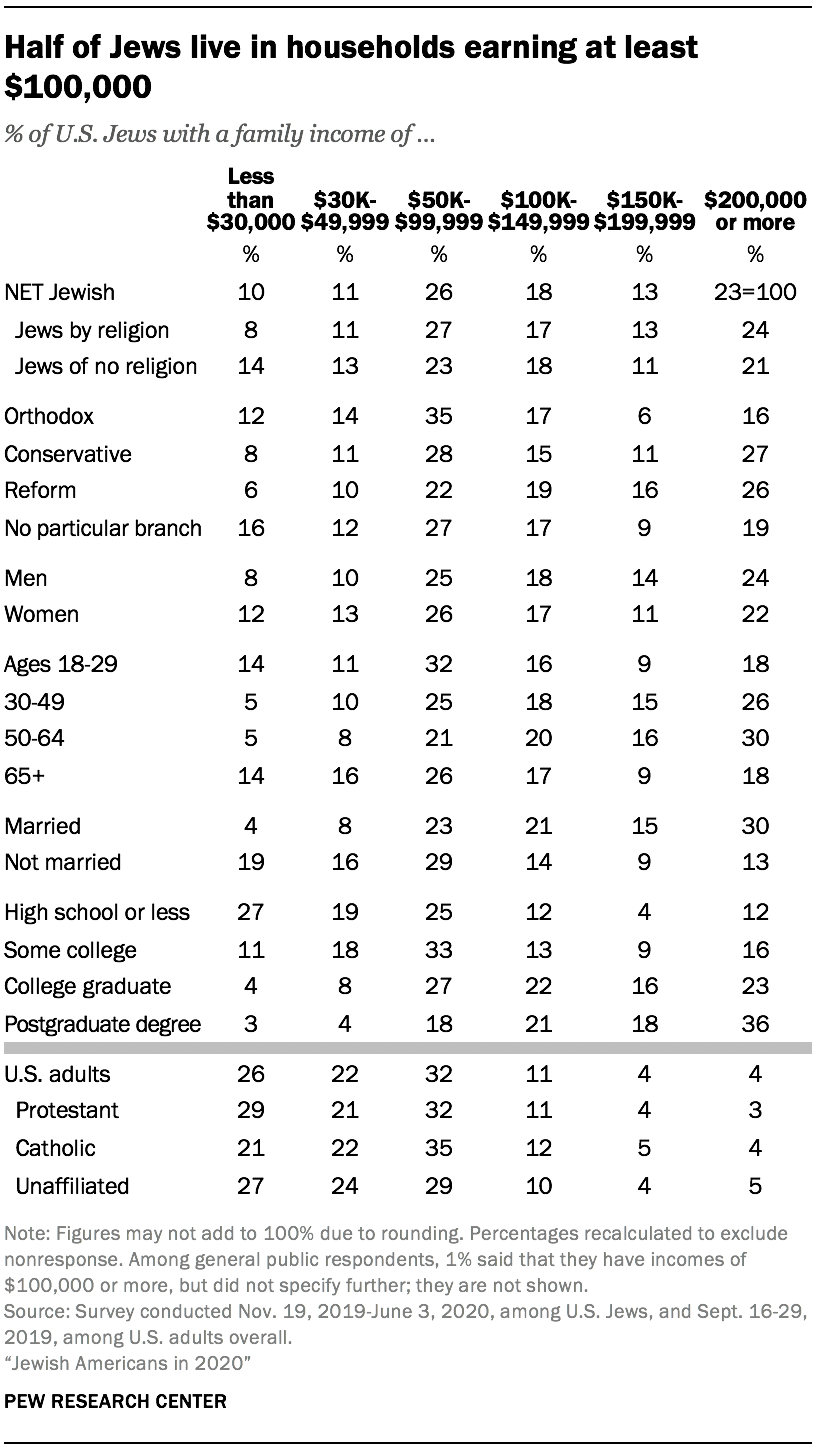 Once I’d regained consciousness I went a-googling. The best I could come up with in a five-minute browse was a report from Pew Research based on a survey done three years ago:

If half are over the 100K mark then that’s the median by definition. And if that was the case in 2020, I’d guess it’s even more the case now, so likely Jewish-Americans are doing even better than Indian-Americans.

Other naughty questions come to mind.

Those Indian-Americans in the Number One spot: Are we just creaming off India’s smartest?

Well, yes, of course we are. And if that’s our gain, isn’t it India’s loss? Aren’t we just strip-mining the Third World of its smartest people?

And is it our gain? Our own Patrick Cleburne posted just the other day that Brown University has had to formally ban discrimination by caste. Are the Indians we’re importing for their talents also bringing in the more obnoxious, un-American aspects of their home country?

Just doing a site search at VDARE.com for Indians, I was reminded how many skeptical articles we’ve posted: not only Patrick Cleburne but Herbert Collins, Eugene Gant, Washington Watcher, A.W. Morgan, Pedro de Alvarado, and more.

My own alarms about importing an overclass are also relevant.

Diversity is not strength. It is weakness. White Racialism in America, Then and Now
An Intellectual History of the Last One Hundred Years
Ron Unz
• 1,066 Comments • Reply