Earlier, by Peter Brimelow: DUNKIRK: âPeople Should Be Hung From Lampposts, They Should Be Burned Alive, For What Theyâve Done To Britainâ

Last week saw the publication in Britain of a report from something called the Commission on Race and Ethnic Disparities. This commission was set up last year by British Prime Minister Boris Johnson, exactly for the purpose of producing a report. So, they have now produced it: a report on race and ethnic disparities in Britain. What does it say?

If you really want to know, you can read the whole thing, all 258 pages of it, on the internet. [Commission on Race and Ethnic Disparities: The Report (PDF)]

I’ll admit I haven’t read the thing myself. I don’t live in Britain any more, and I feel sad and angry when I’m reminded of how a country I remember with some natural affection has been destroyed by mass immigration[GHETTO BLASTER Mass immigration to Britain has changed it beyond recognition and turned communities into ghettos, reveals damning report, by Tom Newton Dunn, The Sun, December 4, 2016]

I’ve been reading news stories about the report, though, and they piqued my curiosity some. Progressive Wokesters, anti-white activists and the like have been hyperventilating that the report fails to blame all “race and ethnic disparities” on âsystemic racismââ

References to the Commissioners in terms of the Ku Klux Klan and the Nazis have shown up on Twitter.

This is from Clive Lewis, a slightly black Labour MP 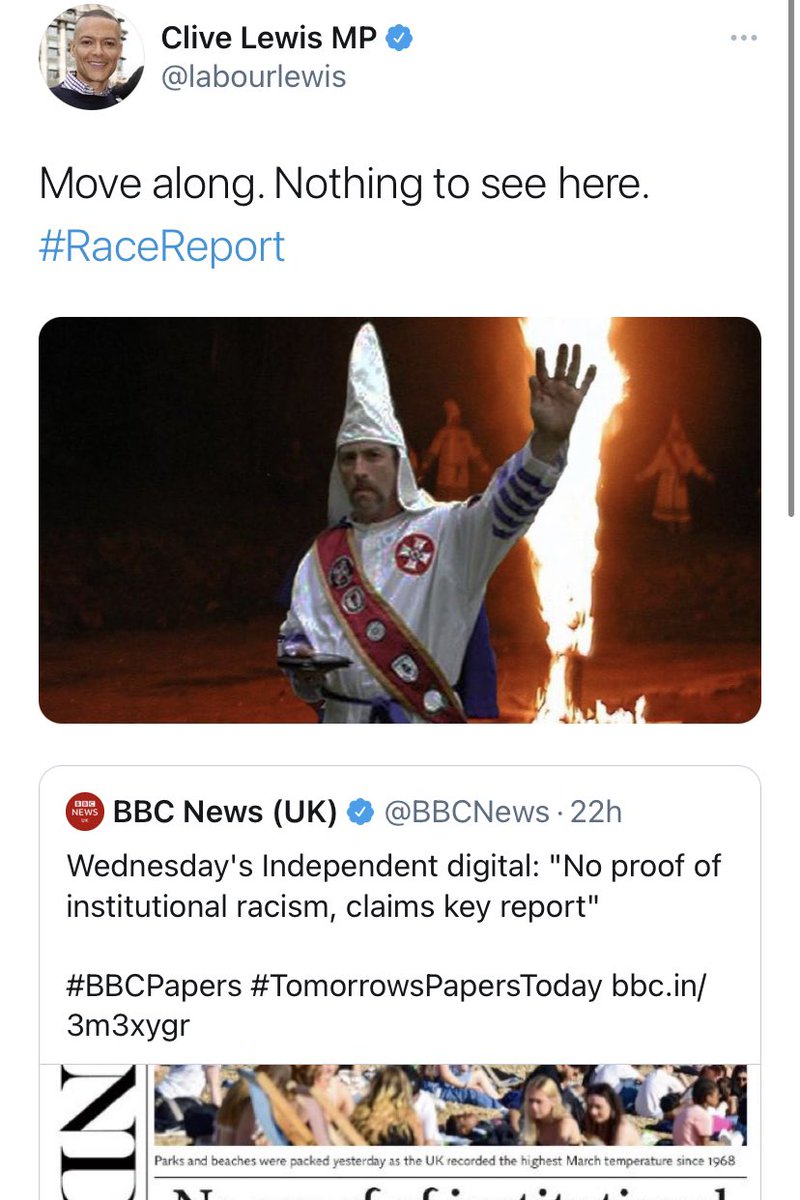 This, in defiance of the fact that of the eleven Commissioners who produced the report, only one is white!

Toby Young over at The Spectator reports that where the report covers education, his own area of expertise, it is quite sensible:

According to the anti-racism cult, our education system is riddled with racial prejudice and needs to be overhauled if students of colour are ever to compete with whites. Virtually the entire educational establishment has accepted this damning verdict and is desperately trying to cleanse itself of this sin â¦

But as the report makes clear, these are solutions to a largely imaginary problem. There is no evidence that non-white children are being held back by “institutional racism.”

Thus encouraged, I thought I’d take a look at the report. I still wasn’t ready to commit to 258 pages of social-science jargon, but I figured I could handle a detailed review of the report from an observer I trust.

That led me to academic psychologist and race realist James Thompson at the Unz Review. Wednesday this week Dr. Thompson posted a 3,500-word report on the report, and I recommend it to your attention.

Dr. Thompson has a dry British style of wit that appeals to me. Sample One:

The Report makes 24 recommendations. Moses got by with 10.

The Commissioners on Race and Ethnic Disparities are themselves almost entirely persons of Race and Ethnicity. This is such a commonplace that no one seeks to question it. The underlying argument seems to be âYou canât talk about it unless youâve been through it yourselfâ. At one selection committee for aspiring clinical psychologists we decided to set that statement as a question for candidates to debate in their group discussions. The Consultant for Mental Handicap moaned: âWell, that cuts out my specialityâ.

Oh, just one more quote from Dr. Thompson. The Commission report seems to be unusually frank about black crime. They note that blacks in Great Britain are eight times more likely to be perpetrators of homicide than whites.

They include this helpful (aside from its deliberately unhelpful color-coding) graphic: 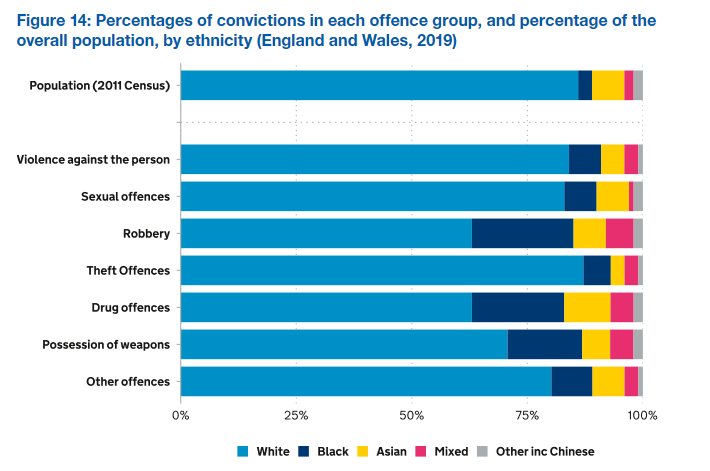 Over to Dr. Thompson:

They say (page 149) that these figures âcontribute to negative stereotypes of young black menâ. Well, that is one way of putting it. The other way would be: âthis accounts for people being understandably afraid of young black men because they are 8 times more dangerousâ.

Good common sense there, then, from Dr. Thompson. I’m still sad and angry, though.

These United States were diverse from the start. We’ve always had to deal with racial diversity as best we can, although I think we’ve been stupid to make the problem worse than it was by mass immigration.

How much more stupid have the Brits been, importing diverse peoples by the millions into an old, proud, and un-diverse nation, when there was no need to do so?

Is the UK a Model on Race?
James Thompson
• 196 Comments • Reply "This Was A Man"âRIP Colin (âCrime Is the New Black Entitlementâ) Flaherty, September 21, 1955-January 11, 2022
John Tremain
• 141 Comments • Reply
← Kamala Harris to Tackles "Root Causes,"..."Asymmetry of Indulgence"âWhy Black C... →
Hide 100 CommentsLeave a Comment
"On That UK Race Report: Britain Destroyed Itself with Unnecessary Diversity"
• 100 Comments
Commenters to Ignore
Commenters to ignore (one per line)