We just got numbers for illegal aliens apprehended on our southern border last month: a tad short of 240,000 [ Migrant encounters hit another high, over 100K removed under Title 42, by Callie Patteson, NY Post, June 17, 2022 ]. That’s the highest number of migrant encounters recorded in one month ever. It brings total encounters in FY 2022 to more than one and a half million. 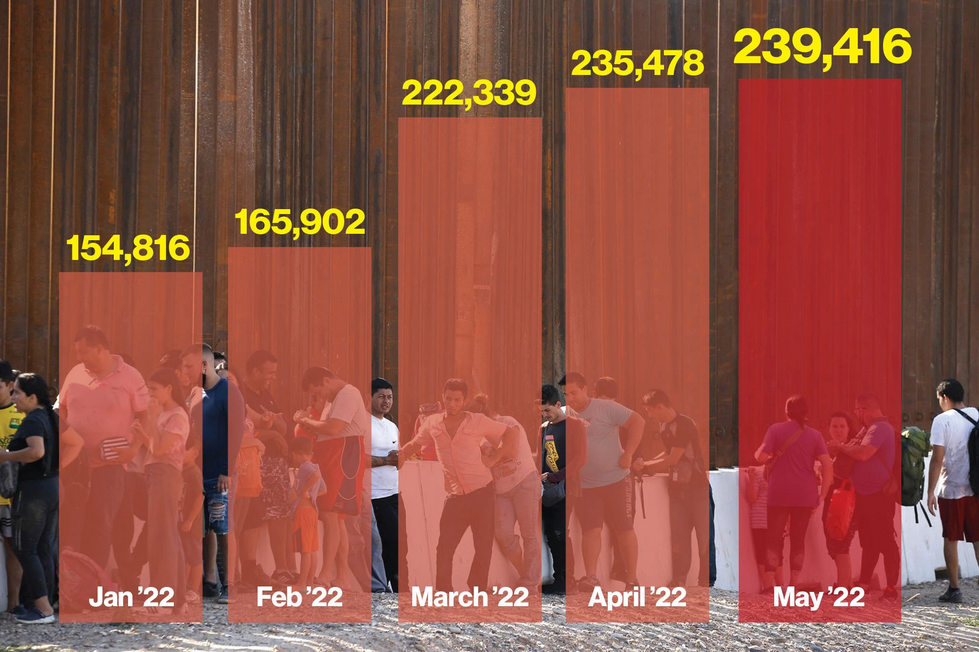 That’s “encounter,” mind. The actual encounter being tallied there is one between an invader and a Border Patrol officer. Either the invader presents himself to Border Patrol with some plausible claim for entry, or he tried to sneak in avoiding the Patrol but got caught by chance. Some large but unknown number of sneak-ins did not get caught.

The good news is that 42 percent of these encounters were deportedâor at any rate, “processed for deportation”âunder Title 42, the Trump-era protocol allowing deportation on health grounds that Joe Biden tried to end until he was thwarted by a judge.

The other 58 percent are being processed under Title 8 of current immigration law. That will result in some number of them being deported. How many: fifty percent? a hundred percent? ten percent? I don’t know.

For a clue I have this from Washington Examiner:

More than 2 million migrants were stopped while attempting to enter the U.S. from Mexico illegally in the calendar year 2021 [not to be confused with fiscal year] â¦ Of the 2 million, roughly 1.1 million were immediately expelled back to Mexico or flown to other countries. Some attempted crossing multiple times, inflating the numbers. But nearly 800,000 were released into the U.S.

Two million stopped while illegally entering US from Mexico in 2021, by Anna Giaritelli, January 24, 2022

As dumb and treasonous as our current immigration policies are, they fairly glow with integrity, efficiency, and patriotism by comparison with Britain’s. I don’t think it’s an exaggeration to sayâand I say it in all earnestnessâthat Britain’s clueless, brainless, worthless government is currently perpetrating the greatest immigration fiasco since Chinese General Wu Sangui opened the gates of China to the Manchus in 1644.

I’ve been reporting to you, most recently on June 3rd, about the swelling numbers of illegal aliens crossing the English Channel from Franceâmore than ten thousand so far this year[Next stop Rwanda? More than 100 Channel migrants land in Kent bringing total to 10,131 this year… as lawyers battle to stop Africa deportation flights, Daily Mail, June 13, 2022].

This is the fourth year it’s been happening. The numbers for these four years, to the nearest thousand: 2019âtwo, 2020âeight, 2021âtwenty-nine. Estimates for this year’s total start at fifty; and once again, these are thousands, so that’s fifty thousand.

Essentially none of these invaders get expelled. They plead asylum or refugee status, although that is a priori preposterous: they’re coming mosr recently from France, where they could also have claimed asylum. They destroy their identity documents so they can’t be deported. The British authorities conscientiously process their bogus asylum claims anyway, putting them up in good hotels while the processing is under way.

For three of those four years the invasion went on with the British government doing nothing at all about it. This, incredible to report, is a government of the Conservative Party; but these are metropolitan progressives led by a Prime Minister who has, all through his political career, been well-known as an enthusiast for multiculturalism.

Then, earlier this year, pressure from voters became too strong to ignore. The government grudgingly agreed to do something about the invasion.

What did they do? They cut an agreement with the black African country of Rwanda to take in some of the illegals while their obviously-fake asylum applications were processed. We first heard that 700 illegals would be shipped to Rwanda, to be accommodated in that country’s hotels.

Britain, however, is choc-a-bloc with well-funded groups who favor mass illegal immigration. They got busy lawyering [Another 150 migrants cross English Channel – a day after Rwanda flight was grounded by Euro court: Asylum seekers give thumbs up as dozens arrive in Dover and 12 land on beach in Devon ‘before fleeing in waiting cars’, Daily Mail, June 15, 2022]. That 700 was quickly whittled down to 130âwhich is still a good plane-load.

By the time the first flight to Rwanda was scheduled for Tuesday last week, the 130 had been further whittled down to seven. The pro-illegal activists swung into action on Tuesday, blocking exit routes from the airport detention center and lawyering up a frenzy. By late Tuesday it seemed there was just one illegal left on the plane.

Then some outfit called the European Court of Human Rights issued an injunction to prevent that one illegal being deported. So the flight was cancelled. Number of illegals deported: zero.

Wait: Didn’t the Brits unshackle themselve s from Europe? How come they have to obey this ruling by a bunch of Frogs, Krauts, Dagos, and Wops? I have no idea. Nobody in Britain seems to have any idea, either.

While all this was going on, of course several hundred new scofflaws landed in Britain and were escorted to nice hotels.

Did I say “fiasco”? This makes our own Border Tsarâor “Tsarina,” I guessâthis makes Kamala Harris look like a strategic mastermind.

As an ex-Brit, in a spirit of nostalgic affection for the old place, I hereby offer my advice to the British government free of charge.

What, you don’t have those kinds of facilities? Then build them, dammit. When COVID came up the ChiComs built a 1,500-room hospital in five days [China builds hospital in 5 days after surge in virus cases, Associated Press, January 16, 2021]

The easy way to do this is to rescind any rights they have been given to work in your country. To avoid them working illegally, establish an E-verify system based on National Insurance Number (that’s the British equivalent of a Social Security Number), with brutal penalties for employers who hire without checking.

That should take care of the problem.

No, no, no need to thank me. You’re welcome! Rocheâs Revenge: How Jews See Muslims as âNatural Alliesâ in Their War on Whites
Tobias Langdon
• 299 Comments • Reply
← Jan. 6 Show Trial Reaches North Korean ...The Spirit of Scalia and the End of ROE... →
Hide 34 CommentsLeave a Comment
"No Matter How Bad the U.S. Immigration Disaster, the U.K. Is Worse"
• 34 Comments
Commenters to Ignore
Commenters to ignore (one per line)