[This piece dates from my spell teaching English at Siping Teachers’ College in northeast China. I had very little do to in my spare time at Siping. The college library had a good selection of Eng. Lit. classics, so I improved my literary education considerably. There was also a periodicals room; but the only English-language publications in it were an Australian communist newspaper and the Pyongyang Times. I spent many happy and instructive hours with the latter (the Australian thing was unreadable), eventually producing this article, which was printed in the London Spectator. The Pyongyang byline was added by them. I have never been to Pyongyang, although I have been inside North Korea.]

If the quickest way to get some insight into a phenomenon is to look at its most extreme manifestations, the student of modern totalitarianism can do no better than to curl up for half an hour with a copy of the Pyongyang Times, an English-language weekly newspaper published in North Korea. 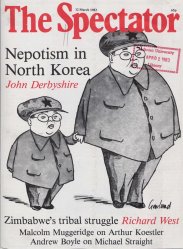 Take the occasion when the front-page headline read: “Colonel Moammer el Gaddafi Visits DPRK”. We get a picture of the arrival ceremony. Gaddafi looks more than ever like an eccentric Jewish gangster from Atlantic City: designer shades, over-the-collar bush of hair touched up with Afro-Sheen, Sergeant Pepper uniform and enough gold braid to hang an entire opposition party. Since the demise or decline of such pace-setters as Papa Doc Duvalier, Idi Amin and Pol Pot, Gaddafi must be regarded as current holder of the title “World’s Least Sane National Leader”. One doesn’t actually hear of him eating babies for breakfast or keeping his enemies’ heads in the fridge, but he has the sort of style that brings such things irresistibly to mind. However, the Colonel may have met his match at Pyongyang airport, for there in the picture, shaking hands with him, is Kim Il Sung, President of North Korea.

Kim is nothing like as flamboyant as Gaddafi, but there are signs that he is every bit as barmy. The principal evidence is his personality cult, which is such as would have brought a blush to the sallow, pock-marked cheeks of Joe “Little Father of the Peoples” Stalin. Kim is not merely President of the DPRK (North Korea is, of course, a Democratic People’s Republic), he is the Great Leader. His name, thus prefixed, adorns almost every news item put out by the DPRK, on any topic. Such items frequently lead off with a quotation from the Great Leader’s works, which are written in the kind of prose that can be cut off and sold by the yard: “Today the non-aligned movement is dealing a heavy blow at the imperialists in their moves for aggression and war â¦” In North Korea, no open space is without its Kim Il Sung statue, every public building larger than a pissoir bears the holy name and the standard entertainment laid on for visitors is a troupe of primary-school kids singing hymns of praise to Father Marshal Kim Il Sung. Harrison Salisbury, who was there in the early Seventies, reported being taken on a tour of a vast museum, past miles of glass cases containing such treasures as Kim’s old shoe-horns. It goes without saying that all the labouring people of the world love their Great Leader. Tucked away inside a little crenellated border on page five of the Pyongyang Times is a poem addressed to him by one Habib Jalab of Pakistan. The last two lines will give the flavour of the thing.

Oh, chum of mankind! Peace carrying flags of thy thought
Shall flutter for ever in the universe.

Kim’s cheeks are neither sallow, nor pock-marked, but white and rather puffy, partly hidden behind those giant lenses that are so much favoured nowadays by Great Leaders. Looking at the face, one knows him at once. This is the Owl of the Remove, the school fat boy, butt of everyone’s jokes, who soothes his injured pride by squealing, “I’ll get back at you rotters â some day!” Like the dictator Paduk in Nabokov’s Bend Sinister, Kim has made good his boast. I would be surprised if any of his former schoolmates are left above the ground in North Korea. To be fair to Kim, though, he no longer looks very fat. Photographs taken 20 years ago, when he followed the lead of Nikita Khrushchev in matters sartorial, show him as frankly obese. Now he is over 70, has shed a hundred pounds, found a sighted tailor, and switched to Mao suits.

The switch is significant. Politics start with geography and North Korea shares with Mongolia and Afghanistan the unhappy fate of being a communist country bordering both China and Russia. Back in the dear dead Fifties, when the two great Asiatic empires were officially the best of friends, Kim could cultivate his garden, slaughter his domestic opposition and put on weight, without worrying too much about foreign affairs beyond the occasional state visit to Bulgaria. After the Sino-Soviet split, some fancy footwork was called for. Was he to be pro-Chinese or pro-Soviet? Kim owed a great deal to both powers. It was the Russians who had installed him in the first place; he had ridden into Korea in the tail of the Soviet contingents, following Stalin’s last-minute declaration of war against Japan. On the other hand, it was Mao who had saved his ample skin during the Korean war when, following the Allied advance to the Yalu River, the Chinese had poured in troops and recovered the North for communism â taking, in the process, the most stupendous losses ever recorded in modern warfare. At the time of the split, both Russia and China must have been calling in their tickets.

For a while, Kim dithered. He purged the pro-Chinese faction in his party, then the pro-Soviets. (If you’re wondering who that left unpurged, the answer is: the pro-Kims.) Finally he decided to try for neutralism. He accordingly invented an ideology of his own, called “Juche” (two syllables). The main idea is self-reliance: produce as much as you can of everything you need, conscript into the armed forces everyone who can walk, and don’t depend on either of the neighbours any more than can be helped. In this way, if you fall foul of one of them, you’re not faced with an economic disaster, as Mao was when the Russians pulled out of China. In the ringing words of Mr Jalab:

Live on thyself, beseech not others. This in fact is Juche.

Having thought this out, the Great Chum mixed in a few commonplaces from the works of Lenin and Mao, inflated it all to several volumes of white, puffy prose, and presented Juche to the world, taking out full-page ads in such revolutionary organs as the Times of London. He also took up Mao suits (which, incidentally, have always been called “Sun Yat-sen outfits” by the Chinese), while cleverly leaving his armed forces in Soviet-style uniforms. The effect was exactly as desired. Khrushchev and Mao were both thoroughly baffled, neither of them saw any reason to break off relations, and Kim was left to get on with his diet programme in peace. For extra insurance, he began to make friends with as many countries as would speak to him â hence the frenzied punctilio of the Pyongyang Times‘s Court Circular pages: “President Kim Il Sung sent a message of greetings to Prime Minister Milton Cato on the third anniversary of independence of St Vincent and the Grenadines â¦”

The rest is history. Juche swept the world. Page four of the Pyongyang Times: “An inaugural meeting of the West Jutland Group for the study of the Juche Idea of Comrade Kim Il Sung was recently held in Tvind, Denmark. Hung on the background of the platform of the meeting were a portrait of the great leader Kim Il Sung and a portrait of the dear leader Kim Jong Il.” I suppose that somewhere in the Home Counties, some earnest group of local authority administrative workers is deep in the study of Juche.

North Korea, as alert readers will have noticed, is blessed with not one leader but two. Furthermore, “Secretary KIM JONG IL, a New-Type Leader, Is the Successor to the Revolutionary Cause of President KIM IL SUNG,” says the headline. Since practically all Koreans are called Kim, it is not readily apparent (and may for all I know be a state secret in North Korea) that dear leader Kim Jong Il is the son of great leader Kim Il Sung. As the Pyongyang Times very neatly puts it: “The appointment of Secretary Kim Jong Il as the successor means that Korea resolved a most difficult problem which had remained unsolved in other countries in the process of revolutionary struggle.” Indeed. Or, to put it another way, North Korea is to become the world’s first communist state with a hereditary leadership.

It makes sense. In any state run by a Great Leader, succession must be decided somehow. The Russian system of succession is most unsatisfactory; the degradation in the quality of Russian leadership from Lenin through Stalin, Khrushchev, Brezhnev and Andropov has been much remarked and is easily explained. Russian leaders follow the advice offered to Ivan the Terrible: “If thou wantest to be an autocrat, do not keep counsellors cleverer than thyself.” The vozhd surrounds himself with yes-men, whose mediocrity secures his own position. When he passes on, one of these nonentities succeeds to the purple and starts hunting around for companions even less distinguished than himself.

Hereditary leadership is a partial solution to these problems. It does not guarantee an unbroken succession of effective leaders â neither does any of the various types of Western democracy â but genetics and careful upbringing will ensure that capable individuals turn up at least once in a while. The chances are that Kim won’t go down in history as the Chum of Mankind, in spite of Mr Jalab’s effots; but as a constitutional innovator of the communist world, he may have left his mark.