VDare: Melania Trump, legal immigrant, wife and mother of an American citizen.
◄►Bookmark◄❌►▲ ▼Toggle AllToC▲▼Add to LibraryRemove from Library • BShow CommentNext New CommentNext New ReplyRead More
ReplyAgree/Disagree/Etc. More... This Commenter This Thread Hide Thread Display All Comments
AgreeDisagreeThanksLOLTroll
These buttons register your public Agreement, Disagreement, Thanks, LOL, or Troll with the selected comment. They are ONLY available to recent, frequent commenters who have saved their Name+Email using the 'Remember My Information' checkbox, and may also ONLY be used three times during any eight hour period.
Email Comment Ignore Commenter Follow Commenter
Search Text Case Sensitive  Exact Words  Include Comments
List of Bookmarks

Itâs odd how many political stories end up in the zone of our irrational, chaotic, and corrupt immigration system. Itâs like an astronomical black hole, with a gravitational force that sucks in any story that gets too close.

You wouldnât think itâs so difficult to have a sensible, straightforward system that meets national needs: that has a small number of clearly-defined categories for who gets to settle permanently in our country, along with some entry, exit, and tracking systems for temporary visitors: tourists, businessmen, academics, students, foreign-language interpreters, exceptional musical performers, and so on. No more difficult, surely, than running a commercial credit-card operation like MasterCard or American Express.

But apparently weâre not up to it.

Example: this week the New York Post, Americaâs Newspaper of Record, published photographs of Mrs. Trump nudeâphotographs taken in 1995 when she was a professional model. This was three years before she met The Donald. 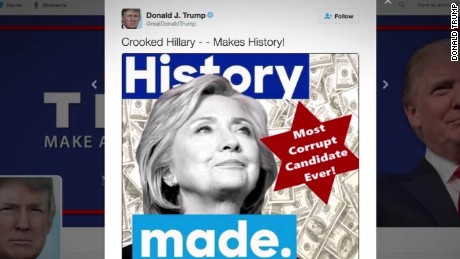 nipples, which the Post delicately covers with stars â five-pointed stars, be it noted. No anti-Semitic dog whistling from the New York Post!

Leaving aside the issue of whether we mind having a First Lady whoâs allowed herself to be photographed in her birthday suitâpersonally, I couldnât care lessâa little spinoff issue emerged from the publication of these pictures. (Not shown here, because Google Ads insists on no âstrategically covered nudityâ even if itâs on the cover of a newspaper, but linked to above.)

coming to the U.S. with the help of a modeling agent who had âbrokered her visa.â [Melania Trump on Her Rise, Her Family Secrets, and Her True Political Views: âNobody Will Ever Know, By Julia Ioffe, April 27, 2016]

What kind of visa was it, though?

In a January interview for a different magazine,Harperâs Bazaar, Melania spoke about how when she was here in the mid-1990s sheâd had to return home from New York to renew her visa every few months:

But there isnât actually any kind of work visa for which you have to do that. You would have to do it for a B visa, a visitorâs visa. But on a B visa, youâre not allowed to take paid employment.

Note, though, that in Chapter Six of their great book Sold Out, by Michelle Malkin and John Miano, we read about a common racket to get around the restrictions on working with a B visa. Basically you enter the U.S. on one of these visitor visas, take up employment,but are paid in some foreign jurisdiction. This scam allows your employer in that foreign jurisdiction to

avoid the hassle of petitioning for H-1B workers; avoid numerical limitations on H-1B workers; and avoid the (nominally enforced) requirements that a job be posted in the U.S. and have pay comparable to that of a U.S. worker. This also guarantees that not one dime of tax revenueâ¦will go to U.S. coffers.

Was that the âbrokeringâ that Melaniaâs modeling agent did for her in 1995? Either it was or it wasnât.

If it was, I donât see the harm in owning up to it. Itâs highly unlikely Melania knew there was anything irregular about the arrangement (to which, in any case, according to Malkin and Miano, the State Department regularly turns a blind eye).

The person who would have known was the agent. From Melaniaâs point of view it was just tiresome paperwork, some kind of legalistic gobbledygook she had to go through to get from one country to another.

If this wasnât the deal â if Melaniaâs immigration status pre-Trump was all strictly by the book â there is no issue.

Either way, Mrs. Trump can clear the matter up by doing what I did a few months ago: scan in the visa pages from her passport and put them on the internet.

See what I mean, though? Everything seems to end up in the immigration ditch. Our immigration system is the rotten core, the suppurating center, of all the corruption and chicanery afflicting our public life.

In the large scheme of things, of course, this matter of Melaniaâs status is a trivial issue. Itâs not even the candidate weâre talking about, itâs his wife, in the years before he knew her. And as Iâve said, if Melaniaâs agent really did bring her over on the B-visa boondoggle, itâs highly unlikely she knew she was doing anything improper.

The Democrat strategists and their stooges in the Main Stream Media are going to make as big a thing of it as they can, though.

That is of course nakedly hypocritical, if youâll pardon the adverb. These are people who donât think there should be immigration rulesâthat totally illegal immigrants, who came in without bothering to get any kind of visa, should be forgiven and awarded full settlement rights.

Rank hypocrisy on the part of the Democrats, yes. But dâyou think thatâll stop them?

Take the sainted Khizr Khan, whose speech to the Democratic convention is now right up there with Martin Luther King. Read Paul Sperryâs researches into Mr. Khanâs published paper trail. [Khizr Khan Believes the Constitution âMust Always Be Subordinated to the Shariaâ, Breitbart.com, August 2, 2016] Turns out this Khan dude is a Muslim of the fundamentalist stripe, who thinks that sharia lawâincluding the bits enjoining wife-beatingâshould take precedence over merely terrestrial fripperies like the U.S. Constitution. Sharia is, after all, the Word of God.

Mr. Khan is a lawyer. He got some sort of degree from a university in his native Pakistan, then moved to the United Arab Emirates, whence, in 1980, he immigrated to the U.S.A. at age 29 or 30.

Iâm sure you remember as vividly as I do the great lawyer shortage of 1980, when the U.S.A. was begging foreign countries to send us their lawyers as we were unable to graduate enough of our own.

Nowadays Mr. Khan specializes in immigration law. His precise specialization is helping foreigners get investor visas, visa categories E-2 and EB-5. These visas basically allow you to buy a green card for permanent residency in the U.S.A. Quote from Jessica Vaughn at the Center for Immigration Studies:

The E-2 and EB-5 are two of the most notoriously abused visa categories that essentially allow wealthy foreigners to buy their way to U.S. residency, and possibly citizenship, with a relatively modest investment.

Michelle Malkin and John Miano in Sold Out give over a whole scathing chapter, Chapter Seven, to the EB-5 program, in which, they say, âfraud and abuse are rampant.â

So if, as Mr. Khan hypothesized to cheering delegates in Philadelphia, if a Trump-style ban on Muslim entry had been in force in 1980, not only would Mr. Khanâs son likely still be alive, but the U.S. would have one less huckster attorney making a fine living by gaming our Byzantine immigration laws on behalf of rich foreigners.

That ban is looking better and better to me.

One Billion Americansâor One Billion Consumers? Fundamental Questions for Matt Yglesias Before We Can Review His Book
James Kirkpatrick
• 209 Comments • Reply
← Derbâs July Diary: Taiwan Is Yellowto...Look On the Bright Side: Trumpâs Not ... →
Hide 101 CommentsLeave a Comment
"Melania Trump vs. Khizr Khan? the Muslim Ban Is Looking Better and Better"
• 101 Comments
Commenters to Ignore
Commenters to ignore (one per line)

← Derbâs July Diary: Taiwan Is Yellowto...Look On the Bright Side: Trumpâs Not ... →
Current Commenter
says:
Current Date at Time Now
Leave a Reply - Comments on articles more than two weeks old will be judged much more strictly on quality and tone
Cancel Reply
Commenting Disabled While in Translation Mode