“Ethnomasochism” is a useful word, with obvious and wide application. It seems to be very new, though. Neither of my big dictionariesâOED with 1971 supplement, Merriam-Webster’s Third New International, 1993âcarries it. (Though I noted with interest on doing the checks that the OED lists the word “Ethnomaniac,” defined to be “One who is crazy about the rights of ‘nationalities’,” with an 1863 usage shown.)

Dictionary.com lists neither the -ism nor the -ist. Google’s Ngram viewer shows no occurrences at all in Google’s “lots of books” database up to 2008, which is as far as the thing will go for me.

After some more heroic Googling, I turned up a reference to a 1981 paper published in a Social Science journal, title: “Cross-cultural relations: medical ethno-masochism.” If there’s a way to bring up the actual paper, I can’t figure it, so I leave that as an exercise for the reader. In any case, that is the earliest sighting I can find of the word “ethnomasochism,” hyphenated or not.

The earliest usage in a book that I am aware of is in Pat Buchanan’s 2011 Suicide of a Superpower. (Reviewed on VDARE.com here, here, and here.)

Scanning my own archives, I see that I first used “ethno-masochism” (thus hyphenated) in November 2009, in a column about, of all things, climate change. The earliest occurrence on VDARE.com seems to be from March of 2011.

Jared Taylor easily trumped us all (though not the 1981 guy) with an article titled “Jews and American Renaissance,” posted on the AmRen website in April 2006:

Whatever its origins may have beenâand they are hardly exclusively Jewishâwhite ethnomasochism has a life and momentum of its own.

Knowing Jared, I’d guess that he found the word during his very extensive studies in social psychology. Perhaps he’ll pick up the trail for us.

Whoever first coined the word, ethnomasochism is certainly a real thing. In minor forms, it can show up in the utterances of any ethny. The early 20th-century Chinese writer Lu Xun made withering criticisms of his countrymen’s “slave mentality,” for which remarks he was himself much criticized by Chinese ethnochauvinists. The meme lived on, though: I spotted a character moaning about her people’s “slave mentality” in a 1980s Chinese novel.

Even American blacks, with what Nicholas Stix has called their characteristically “toxic levels of self-esteemâ are susceptible to occasional flashes of ethnomasochism.

(The city’s Mayor Michael Bloomberg, ever upbeat, exulted that, hey, this year’s death toll from the parade was lower than last year’s!)

It was among white people of the later 20th century that ethnomasochism first became a full-blown ideology, though. We whites of dissident temperament and, ahem, a certain age have followed the entire development with bafflement, alarm, and occasional amusement. It has been like watching some great transformation of a familiar landscape.

The road leading to the territory of the ethnomasochistsâto the place where dwell those who despise their own people and take pleasure in seeing them harmedâbegins of course in the City of Guilt. (Apologies to the shade of John Bunyan here.)

Fifty years ago that road was a mere dirt track. If, back then, you followed it through the bushes and round the swamps (not yet drained), you would meet only the occasional solitary traveler, usually some unkempt individual toting a backpackâa Susan Sontag perhaps, or a Stanley Ann Dunham; perhaps a young Martin Bernal â¦ although the traveler was much more likely than not to be female.

Plenty of private citizens make the journey, too. They have visited the City of Guilt as tourists, and sampled all the attractions: those marvelous museums filled with dioramas of colonialism, imperialism,exploitation, and Jim Crow; the 24-hour continuous screenings of Roots and The Help; the public readings of To Kill A Mockingbird; the daily parade of self-flagellators. Thus infused with the spirit of ethnomasochism, and perhaps further inspired by a sermon at the city’s magnificent Episcopal cathedral, they set off down the highway towards loathing of their own civilization and determination to help bring about its destruction.

You might think that scholars in the social sciences would be busy inquiring into causes and origins for such a striking development.

You might, I mean, if you knew nothing about the modern Academy. Researching ethnomasochism is, I would guess, not a fast track to career advancement in American universities.

Stuff gets done, though. This video clip âGroup Polarization and the Fad of Ethnomasochismâ has cropped up on several Dissident-Right websites the past few days. It’s credited to Hugh MacDonald, whom YouTube lists as a 24-year-old Canadian, but who is otherwise not known to me. (And is hard to nail down by Googling, “Hugh MacDonald” being the Scottish equivalent of “John Smith.”)

The video derives ethnomasochism from group polarization, a standard and (I am reliably informed) non-controversial topic in social psychology.

At 8 minutes 33 seconds the video isn’t long, and is worth your time. First we get some voice-over exposition of the underlying theory. Then, starting at 2m35s, five hair-raising clips of ethnomasochists strutting their stuff:

Then more theory on why the white ethnomasochist is the way he is. It’s conformism, basically, inflated by that “group polarization” phenomenon. From 4m17s:

Pushed by this fear of persecution [i.e. as a racist], and pulled by his desire to come across as better than average, it isn’t enough for him to stop at saying, “It’s bad to hurt other peoples.” He has to one-up his peers and say, “Not only do I believe in treating people equally, I actually really like other peoples. I don’t just really like other peoples, I prefer other peoples. I don’t just prefer other peoples, I hate my own people. My people are a bad people. See? That’s how far from racist I am! Not only do I not dislike others, I actually hate my own people! That’s just how much of a great person I am. See how un-racist I am? I’m not just good; I go above and beyond. I’m outstanding!

I can’t vouch for the robustness of the theory here, but I’m glad to know someone’s taking ethnomasochism seriously.

And just having a name for something can do wonders all by itself. First diagnosis, then prescription.

If we can get the word “ethnomasochism” out into general circulation, we might be able to put some coloring of shame on it.

Then ordinary citizensâpossibly even ones as dimwitted as Jim Carreyâmight reflect on something they just said as: “Hey, was I being ethnomasochistic there? Ouch!”

John Derbyshire [email him] writes an incredible amount on all sorts of subjects for all kinds of outlets. (This no longer includes National Review, whose editors had some kind of tantrum and fired him. He is the author of We Are Doomed: Reclaiming Conservative Pessimism and several other books. His writings are archived at JohnDerbyshire.com. 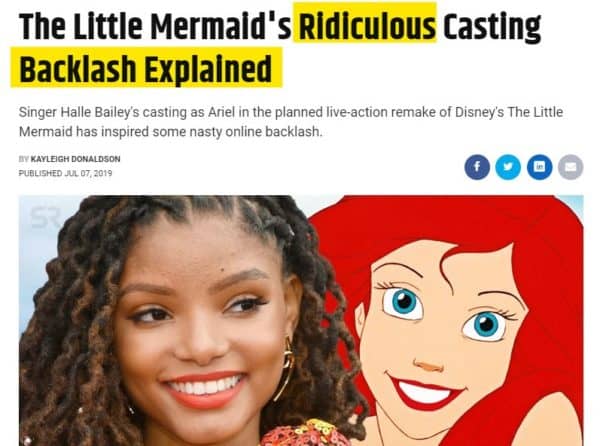