Big news of the week: the arm-wrestling bout with Iran. Again, as I said last week, there is no market here for Great Game strategizing. I’d like for us to tip over the chess-board and walk away.

The whole thing just fills me with despair and disgust at the sheer colossal stupidity of American foreign policy. Trillions of dollars, thousands of lives, tens of thousands of maimed and disfigured, for what? 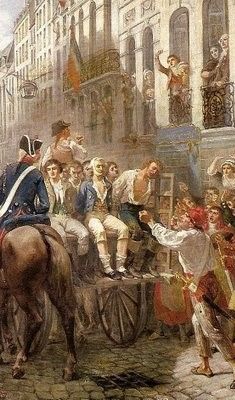 Doesn’t anyone have to answer for it all? Doesn’t anyone at least get reduced to the ranks of ordinary citizens with ordinary jobs, instead of wallowing in extravagant government pensions, corporate directorships, and six-figure speaking fees?

I guess not. They’re the nomenklatura. They can do as they please. I more and more find myself thinking there are tumbrils and guillotines in our future, and not minding the thought very much.

I have a couple of sidebar points about the Iran business, though.

Quote from the New York Times:

The head of Iran’s emergency medical services said 56 people had died and 213 were injured â¦ as millions of people flooded the streets of Kerman to witness the [funeral] procession.

For us Cold War babies, that brings to mind Stalin‘s funeral in Moscow, March 1953. Again, crowds overwhelmed the crowd control measures and many people were crushed or trampled to death. [How Stalinâs demise resulted in the deaths of dozens of Soviet citizens, by Oleg Yegorov, Russia Beyond, March 15, 2019] Nobody knows the numbers: estimates start at a few dozen.

So, one for the memo file: If you’re in a totalitarian dictatorship when someone really important dies, stay away from the funeral procession. It’ll be on TV anyway.

(If you’re in a civilized country, the issue doesn’t arise. I followed Winston Churchill’s funeral cortege all through the streets of 1965 London without mishap. But that was when Britain was a civilized country. Nowadays things might be different.)

Stopped clocks are right twice a day, though, and Joe Biden has occasionally been right. I’m looking at the op-ed cosigned by Joe Biden and the late Leslie Gelb, a Council on Foreign Relations panjandrum, back on May 1st, 2006. It makes melancholy reading thirteen years and eight months later:

It is increasingly clear that President Bush does not have a strategy for victory in Iraq. Rather, he hopes to prevent defeat and pass the problem along to his successor. Meanwhile, the frustration of Americans is mounting so fast that Congress might end up mandating a rapid pullout, even at the risk of precipitating chaos and a civil war that becomes a regional war.

Our frustration was mounting so fast! Thirteen years and eight months ago! That’s precisely five thousand days ago this Wednesday, if my calculator has not deceived me. Five thousand days! Imagine how much more frustrated we must be now! 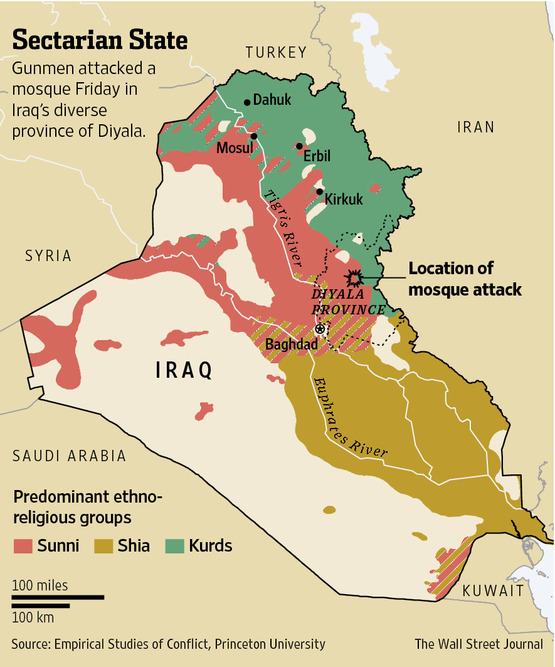 And: “Congress might end up mandating a rapid pullout.” Congress! [Laugh.]

That’s not my main point, though. My main point is a bit further down in Joe and Leslie’s op-ed.

After noting the ineffectual nature of Iraq’s so-called “governments of national unity,” Joe writes, or agrees with Gelb writing, the following:

The alternative path out of this terrible trap has five elements.

The first is to establish three largely autonomous regions with a viable central government in Baghdad. The Kurdish, Sunni and Shiite regions [See map at right, via the WSJ.]would each be responsible for their own domestic laws, administration and internal security.

Iraq is a bogus country. It should be three countries. All right, that’s not precisely what Joe wrote, but he and Gelb were headed in the right direction. 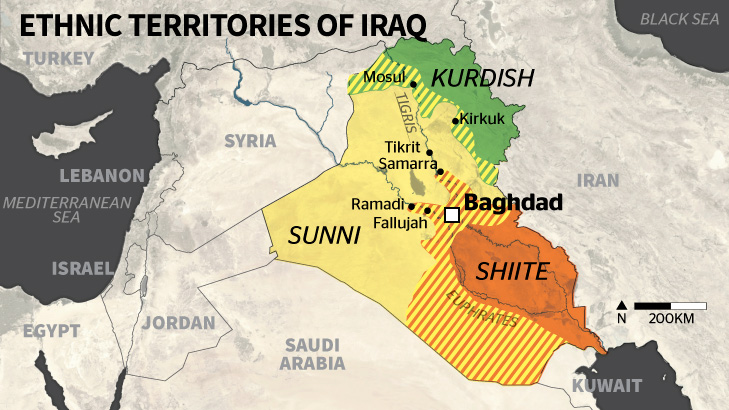 Partition of Iraq is the Best Solution for Iraq, Semnak Lairam, February 7, 2018

But the rest of the foreign policy Establishment was of course aghast. Iraq’s borders are sacrosanct! they swooned.

If only they’d felt the same way about America’s.

So yes, sure, Joe’s a clown. But even a clown is right once in a while.

Bomber Joe Biden Strikes Iraq and Syria: Retaliation Breeds More Incidents
Philip Giraldi
• 142 Comments • Reply
← DECEMBER DIARY: Out with the Tens, In w...âDisparate ImpactââKey Lie In Our... →
Hide 32 CommentsLeave a Comment
"Joe Biden Was RightâPartition Iraq! But That Was Back In 2006"
• 32 Comments
Commenters to Ignore
Commenters to ignore (one per line)

← DECEMBER DIARY: Out with the Tens, In w...âDisparate ImpactââKey Lie In Our... →
Current Commenter
says:
Current Date at Time Now
Leave a Reply - Comments on articles more than two weeks old will be judged much more strictly on quality and tone
Cancel Reply
Commenting Disabled While in Translation Mode