You’ve been hearing a lot recently about how Afghanistan has been America’s Longest War. No: Immigration has been our Longest War, ours and Britain’s. From the Hart-Celler Immigration Act to today: 56 years. From Enoch Powell’s famous speech urging immigration restriction to today: 53 years. There have been some small victories for common sense this month. But also bad news. The whole experience has been a complete, and possibly terminal, failure of Democracy.

You probably saw the reports that encounters on our southern borderâencounters, that is, between agents of U.S. Customs and Border Protection and foreigners trying to enter our country illegallyâthese encounters hit a record number in July: over 210,000.

That number is the more striking because in normal years fewer and fewer illegals attempt the crossing in these hot summer months. Now that trend has reversed: the July figure is up eleven percent from the June number. The year-to-date figure is over a million.

CBP estimates that over and above the 210,000 aliens encountered, a further 37,000 illegals reportedly evaded Border Patrol entirely. Nobody can tell me how they get that number, and experts, like Todd Bensman at the Center for Immigration Studies, think it is “likely a significant undercount.â

So, 210,000 encounters in July. What happens to the people who are encountered? Well, some become apprehensions, the rest become expulsions.

It used to be that the great majority of encounters led to expulsions: 85 percent for Donald Trump’s last full month in office. Eighty-five percent of illegal border crossers were expelled.

You will not be staggered to learn that the proportion of expulsions has declined dramatically under Biden. For the month of July it was down to 47 percent [Migrant encounters at U.S.-Mexico border are at a 21-year high, by John Gramlich, Pew Research, August 13, 2021] the first time it has ever been less than half.

Most expulsions are done under Title 42, an order out of the Centers for Disease Control [CDC], issued in March last year, when the COVID pandemic was getting up steam. Title 42 is hated hated HATED by the Open Borders lobbies.

In fact, doing a Google search on “Title 42,” as I just did, opens your eyes to how many Open Borders lobbies there are, toiling away tirelessly on behalf of immigration scofflaws.

There may be more of these Open Borders lobbying groups than there are illegals violating the borders!

Well, some good news on Title 42: The CDC is holding the line. They announced August 2nd that they’d keep it in place with a review every 60 days (so the next review is October 1st).

All right, that’s expulsions, what about apprehensions? I mentioned that in July, for the first time, there were more apprehensions than expulsions. What happens if an illegal is apprehended?

What happens is, the illegal is taken into custody by CBP and held awaiting some kind of ruling. Well, that’s the theory. In practice, the numbers now are far too great for proper adjudication, so a lot of them just get released.

One way to get yourself into the adjudication process is to claim Asylum. Again, the numbers claiming Asylum are way greater than can be adjudicated in any timely fashion, so they’re given a card with a date when they’re supposed to appear, and released.

But in the matter of Asylum, there was a positive development this week. The development concerned MPP, the Migrant Protection Protocol.

MPPâinformally known as the “Remain in Mexico” policyâwas another Trump initiative. It came into force via a Department of Homeland Security order in January 2019. MPP allowed border officials to send Asylum claimants back to Mexico while they waited for an adjudication in the U.S.A.

All that mighty host of Open Borders lobbyists of course hated MPP as much as they hate Title 42. There were legal and judicial battles, rulings and appeals. Then in February this year Biden ended MPP, letting the Asylum claimants come flooding in.

That got us off to the judicial races again. In April the states of Texas and Missouri sued the Administration on the grounds that ending MPP had started a flood of illegal aliens that was imposing costs on those states.

Forward to this month, August. Two weeks ago a federal judge in Texas ordered MPP to be reinstated, saying the Administration hadn’t gone through the right procedures to annul Trump’s order.

The Administration asked for a stay to block the reinstatement while it appealed; but the stay was denied first by the court of appeals for Texas and thenâHallelujah!âthis Tuesday by the U.S. Supreme Court [Supreme Court rules Biden may not suspend Trump-era ‘remain in Mexico’ policy for migrants, by John Fritze, USA Today, August 24, 2021].

So: We still have Title 42, and we again have MPP.

Small victories, but encouraging none the less.

What is much less encouraging, when you think about it, is the failure of democratic processes to make much of a dent in elite enthusiasm for mass immigration.

I feel this more than the average American, having spent my early years in Britain. In my teensâlate 1950s, early 1960sâI was already listening to my working-class relatives grumbling about the numbers coming into Britain from the Caribbean and South Asia.

I was not long out of college when Enoch Powell made his great speech, with those memorable phrases that still resonate:

The supreme function of statesmanship is to provide against preventable evils.

It is like watching a nation busily engaged in heaping up its own funeral pyre.

Powell’s speech made him a hero to most Brits. Edited quote from Chapter 11 of Simon Heffer’s biography of Powell:

At the end of April [1968], Gallup had undertaken a survey that showed beyond question that Powell had spoken for Britain. Of those questioned, 74 percent agreed with what he had said and only 15 percent disagreed â¦ An already significant 75 percent of those questioned had, before the speech, felt immigration controls were not strict enough; after it, that figure rose to 83 percent.

A reasonable person, seeing the polls and the demonstrations in Powell’s support, or just talking to ordinary Brits, would have predicted that mass immigration into Britain would thenceforth be a dead letter.

That was 53 years ago. What’s the situation now?

From an August 13th report out of Migration Watch, a rough British equivalent of the Center for Immigration Studies:

About half of births in key cities are to mothers born overseas â¦ In the period from 1980 to 2000 immigration by non-UK nationals was running at a net level of about 80,000 per year. However, under successive governments since then it has averaged around 300,000 a year â¦

Between 40 percent and 60 percent of births in three of the UK’s largest citiesâLondon, Birmingham and Manchesterâare now to mothers who were born overseas â¦

In the North East of England only 12 percent of pupils in state-funded schools are from an ethnic minority background, while this figure is 38 percent in the West Midlands and 80 percent in inner London. 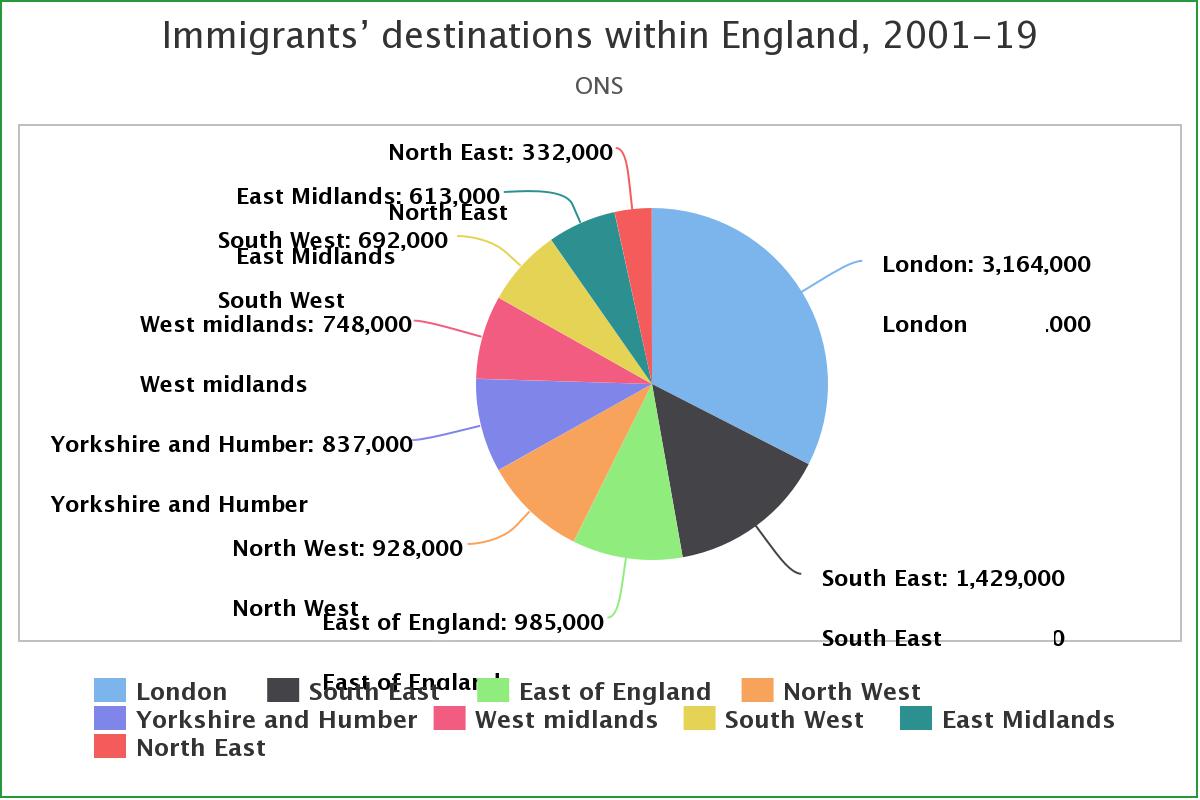 Immigration is having a massive impact on our towns and cities, August 13, 2021

In these 53 years Britain has been utterly transformed. Migration Watch estimates that on current trends, ethnically English children will be a minority in England’s primary and secondary schools within 20 years. Population replacement accomplished!

This is a complete, possibly terminal, failure of democracy. The only section of British society that wanted this was a subset of the elite classes: gentry types addled with post-imperial guilt, university Progressives keen to show their moral superiority to the unwashed masses, plutocrats looking for cheap worker s. Most people didn’t want it, but â¦ it happened anyway.

And it’s still happening. The smuggling of illegals across the English Channel is now a huge criminal enterprise, with the smugglers making as much as a million dollars from a boat crammed with forty people [MIGRANT CRISIS People smugglers making up to Â£700k per Channel crossing by cramming boats with up to 40 people, by Nick Pisa, The Sun, August 21 2021]. That’s a fee of twenty thousand dollars or more per passenger, so these are not the wretched of the earth. They are middle-class types from poop-hole countries in Africa and the Middle East.

Britain’s government does basically nothing to stop them. Eleven thousand have come this year.

Over there, just as over here, elite determination to replace their own legacy population is a mighty force, much stronger than can be held back by any democratic restraints. It surges on forward, indifferent to public opinion.

These have been our Longest Wars.