It is allegedly always darkest before the dawn.

Hereâs some darkness: the symphony orchestra of Austin, Texas has fired their lead trombonist. This is a white lady named Brenda Sansig Salas, 51 years old and a U.S. Army veteran. Austin Symphony Trombonist Fired Over Racist Comments, The Violin Channel, June 1, 2020 She’d been posting comments on social media. The comment that precipitated her firing was apparently this one:

The BLACKS are looting and destroying their environment. They deserve what they get. 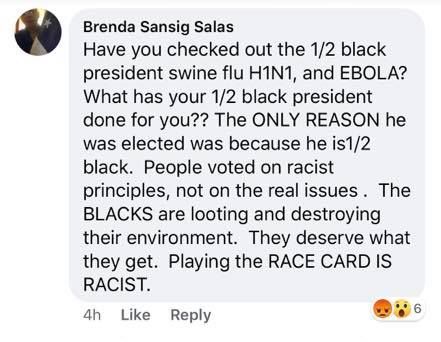 Symphony orchestra spokes-critter Anthony Corroa [Email him]announced the firing of Ms. Salas in the dreary schoolmarmish jargon of corporate wokeness: This language is not reflective of who we are as an organization.” And “there is no place for hate within our organization.”

So if you can work that trombone to orchestral standard, there’s a vacancy in Austin. And our Cultural Revolution rumbles on.

When it is over, the range of opinion allowed to be expressed by anyone employed in any kind of respectable jobâor even, as the case of that soccer player illustrates, by the spouse of anyone so employedâwill be even narrower than it was before the beatification of the Holy Blessed Martyr George Floyd, peace be upon him.[ LA Galaxy dumps soccer player after wifeâs âracist and violentâ posts about George Floyd protesters By Nancy Dillon New York Daily News, June 05, 2020]

That, of course, is the point. The goal here is totalitarian thought control. Only one set of opinions will be permitted in the public sphere. Every opinion not approved by the Thought Police will be a species of hate.

It will not be who we are.

But now the dawn: I have an announcement to make.

My dream is of an America that has embraced race realism.

I have a dream that one day we shall discard magical thinking about race; that the notion of an invisible vapor or miasma called “racism” permeating the atmosphere and intoxicating our minds will seem as quaintly absurd as the Four Humors Theory of ancient medicine or the Luminiferous Ãther of 19th-century physics.

I have a dream that one day, poor white children will not have to endure being lectured about their “privilege” by rich black adults.

I have a dream that one day soon, after sixty years of futile efforts to change what cannot, in the nature of things, be changed, sixty years of twisting our constitution and our jurisprudence into knots to pretend that different statistics by race can only be caused by white people’ s ill will, sixty years of vast public expenditures on educational and social programs that deliver no benefits at all (other than to those who pocket the expenditures); that one day soon, after sixty years of futility and waste, we shall accept race differences as calmly and as prudently as we accept the laws of thermodynamics.

I have a dream that with the black homicide rate at eight times the white rate, and with discrepancies of a similar size having existed since reliable records began a hundred and eighty years ago, an organization calling itself Black Lives Matter will address itself to bringing black homicide numbers down to the white levelâbetter yet, to the Asian levelâor else be laughed out of the public square.

I have a dream that race differences in outcomes, which are mere statistical abstractions remote from our everyday dealings, will one day matter as little to us as personal differences in outcomes. I shall never be a skilled violinist, a good tennis player, or a creative mathematician; not because of malice, “racism,” or “privilege” on the part of my fellow citizens, but because of my own abilities and inclinationsâwhich, like almost everyone else’s, are middling and un-spectacular. I do not lose sleep over this. I absolutely do not take it as an occasion to insult and berate my fellow-citizens, or deprive them of their rights.

I have a dream that our nation’s past will one day be cherished for having made possible our present security and prosperity; that the ignorance and misdeeds of that past be kept in sight on a shelf, accessible to all, but never dominating our view of what our ancestors were, the heroism they displayed in defense of our civilization, and the great good things they did.

I have a dream that one day freedom of association, which picks no man’s pocket and breaks no man’s leg, will be restored to us.

I have a dream that the evil and divisive doctrines of “disparate impact” and “affirmative action” will be scrubbed from our jurisprudence; that hiring into civil-service workâincluding police work and firefightingâwill be strictly meritocratic; and that young black Americans will no longer, just to satisfy the whims of smug college admissions officers and innumerate jurists, will no longer be pushed into academic college programs they can’t cope with and will drop out from.

A Country Not Salvageable
Nor, Many Say Quietly, Worth Saving
Fred Reed
• 592 Comments • Reply
← I Will Not Genuflect to This Church of ...Look On the Bright SideâBLM "Revoluti... →
Hide 379 CommentsLeave a Comment
"I Have A DreamâThat This Is the Darkness Before the Race-Realist Dawn"
• 379 Comments
Commenters to Ignore
Commenters to ignore (one per line)