The inspiration for this article is a piece on the politico.eu website, which I assume is the European version of our own center-left Politico.com:

The dehumanization of Europe is on the march.

Capitulating to populist anti-immigration politicians, European Union leaders are pulling up the drawbridge to migrants fleeing war, famine and poverty in Africa and the Middle East.

The cries of those drowning in the Mediterranean trying to reach Europe were drowned out at the EU summit last week by the sound of the Continent’s leaders washing their hands of the misfortune of asylum seekers to save their political skins.

The subhead to the article is: “Fortress Europe hardens its heart.” 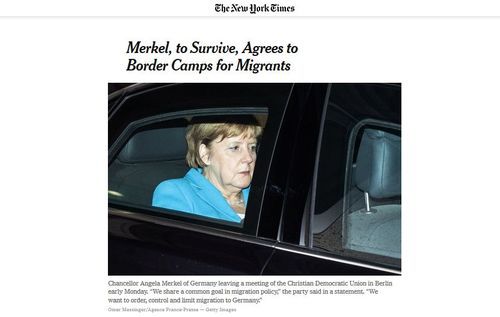 The body of the article is a breathless argument from the bleeding-heart Left that Europe’s leaders are abandoning their Open-Borders policy towards so-called “asylum seekers” and being led astray from the paths of righteousness by siren songs from populists of the “extreme right.”

But the comment thread to the article is almost uniformly hostile to author Taylor’s sentiments. [Email Paul Taylor.] The Europeans are waking up, and Open-Borders globalism has less and less of a market share. Globalist One-Worlders like this Politico writer are in retreat.

The parallel with the U.S.A. is obvious. It’s dawning on great numbers of people, here and in Europe, that unrestrained mass immigration into stable, developed societies like those of the U.S.A. and Europe, is a potential disaster for our civilizations.

Some of those high percentages are of course people swept up in the anti-Trump hysteria over little toddlers supposedly ripped from their mothers’ arms and hurled into metal cages by heartless border guards. Most, though, I’m sure, are citizens waking up, as Europeans are waking up, to what suckers we have been for too longâthe fools of the worldâfor giving free settlement in our countries to anyone from further south with a sob story.

This is a real big, accelerating swing in public attitudesâattitudes among ordinary, not very political, not very reflective peopleâin the West. The consequences of it will be historic in a major way.

I just said “the West,” but that isn’t really right. “The North” would actually be more accurate. All these population flowsâblacks and Muslims into Europe, Central and South Americans into the U.S.A.âare from south to north. The barriers going upâor at least, that we are just now seriously thinking and talking about putting upâin Europe and the U.S.A. are barriers against south-north flows.

In my book We Are Doomed I used the phrase “Ice People” to refer to those populations whose deep history took place in northern Eurasia, as contrasted with Sun People, whose remote ancestors evolved closer to the equator. In terms of race, Ice People are the whites of Europe and European settler nations, together with the East Asians of China, Japan, Mongolia, Siberia, and Korea. Sun People are the rest.

The great population movements of our age, against which the barriers are beginning to go up, are of Sun People into Ice People territories.

Back in 2007 I wrote a column titled “The Arctic Alliance,” in which I argued that we Ice People, the whites and the yellows, with mean IQs higher than the world average but fertility rates lower, needed to join forces in the common interest of preserving our homelands against Camp of the Saints-style mass invasions by low-IQ, high-fertility Sun People.

(I’d better add here, for clarification, that I never intended my Arctic Alliance to be an Arctic Union. In my vision, the Ice People nations remain distinct nations, each with its own culture, proud of its own history, enforcing its own rules for crossing its own borders. I do not want the Ice People to merge into an EU-style bureaucratic superstate, with free movement across internal borders. I never liked that idea for Europe, and I don’t like it for Ice People at large. An alliance of independent sovereign nation-states, co-operating for common interests, not a union.)

Readers who emailed in with comments on that 2007 piece mostly scoffed at my idea for an Arctic Alliance. East Asians, they said, are robustly race realist, and have no intention of permitting settlement by floods of Sun People.

There is certainly something in that; but East Asians haven’t really been put to the test.

Perhaps they will be. In the strait that separates Japan from Korea is the island of Jeju, about the size of Maui. It belongs to South Korea, and its economy depends heavily on tourism. For reasons to do with that, it has a different visa policy from the rest of South Korea. Visitors from most countriesâthere is a short list of exceptionsâcan come to Jeju Island visa-free for thirty days.

That’s been causing problems recently. Here’s a story from the English-language version of Deutsche Welle, a German news outlet, June 26th this year, headline: South Koreans resist arrival of Yemeni asylum seekers. Some 950 foreign nationals, most of them from Yemen, took advantage of the no-visa policy to enter Jeju as tourists and then applied for refugee status.

A great many South Koreans are mad as hell about this. The Deutsche Welle story quotes a South Korean blog:

Politicians are reluctant to respond to the clear voices of the majority of people and the media also supports refugees. It is time to go out onto the streets and make our voices heard.

That reads like something from a European or U.S.A. blog. So perhaps I was on to something with my notion of an Arctic Alliance.

It may even be the case, if that South Korean blogger is right, that the local media over there, or some portion of it, is as suicidally ethnomasochistic as our own. Bad ideas are no respecters of national borders, nor even of major cultural boundariesâthink of communism.

Could East Asia turn ethnomasochist? It seems inconceivable, but history is full of surprises.

For sure there is much more going on than is dreamed of in that Politico piece. “Fortress Europe”? The public sentiment that we see developing in Europe, the U.S.A., and perhaps South Korea is more like a desire for a Fortress North.

Retiring EU Chief Jean-Claude Juncker Still Has No Idea What He Did Wrong
âI am sad that I was not able to make Europeans love Europeâ
Guillaume Durocher
• 142 Comments • Reply
← June Diary: Itâs A White Thing; the I...Ice People (Including Bruce Lee) Under ... →
All Comments Hidden • Show  203 Comments • Reply
Personal Classics