Nigel Farage listens to a British caller who is well to his right on Muslim immigration. Credit: VDare.com.
◄►Bookmark◄❌►▲ ▼Toggle AllToC▲▼Add to LibraryRemove from Library • BShow CommentNext New CommentNext New ReplyRead More
ReplyAgree/Disagree/Etc. More... This Commenter This Thread Hide Thread Display All Comments
AgreeDisagreeThanksLOLTroll
These buttons register your public Agreement, Disagreement, Thanks, LOL, or Troll with the selected comment. They are ONLY available to recent, frequent commenters who have saved their Name+Email using the 'Remember My Information' checkbox, and may also ONLY be used three times during any eight hour period.
Email Comment Ignore Commenter Follow Commenter
Search Text Case Sensitive  Exact Words  Include Comments
List of Bookmarks

Talk about fake news: before our very eyes, the Main Stream Media is attempting to disappear Swedenâs Muslim rape crisis after President Trump alluded to it in his Florida rally on Friday e.g. From an Anchorâs Lips to Trumpâs Ears to Swedenâs Disbelief . [By Peter Baker And Sewell Chan, NYT, February 20, 2017]

Trump did not actually say what the MSM heardâthat Sweden had suffered a terrorist attackâbut that the Swedes, having taken in large numbers, were âhaving problems like they never thought possible. â[âTrump Tranceâ? Media Sure It âHeardâ Sweden Comment Trump Never Said, By Charlie Martin, PJMedia, February 20, 2017]

And now immigrants are rioting in Sweden to prove him right. The New York Times is still in denial.

Like disproportionate black crime in the U.S., this phenomenon is a Hate Fact so thoroughly repressed by the MSM that its denizens are genuinely astonished when the subject surfacesâalthough itâs old news to readers of samizdat publications like VDARE.com.

And, of course, ordinary Europeans know, and are drawing conclusions. Listen to this sound clip. Itâs a caller to a British radio show hosted by Nigel Farage, the Trumpish former leader of Britainâs national-conservative UKIP party. If the callerâs accent sounds vaguely familiar, itâs because heâs from Liverpool, so he talks like a Beatle. Thatâs âB-e-aâ Beatle: âB-double-eâ beetles donât talk:

Well, I went to a mosque in Liverpool. People have been talking about trying to understand Islam, to try and get a grasp of what Islamâs all about. And the Imam, who was standing in front of the congregation, he said: âAllah has given us this country, and every knee will bow at the name of Allah.â

Islam is a takeover movement. It wants â¦ All it believes, that Allah has given them this country. Theyâre just taking over. Weâll have one choice: Either convert or go. We will be pushed aside.

Now, why are we allowing this to happen? This is colonization. This is takeover. Why have our elite allowed this over the generations?

The Muslim population is exploding in this country. In 1971 there was just 70,000 Muslims. Nobody knows how many there are now. There may be as many as seven million. We know there are 2,000 mosques in Britain now. When the Queen came on the throne there was only one.

Islam is exploding in this country. Its democracy [sicâhe means âdemographyâ] is increasing dramatically, and weâre under serious threat. People have got to wake up to this problem. Weâve got to do something about it.

Do we let Islam simply take over? No, we have to stop immigration, yes, but their birthrate is exploding as wellâtheyâre filling up the maternity hospitals.

Weâre going to reach the point where weâre going to have to say to the Muslims: âItâs time to go home. Go back to the Dar al-Islam. You donât belong in the West. Youâve nothing to contribute here. Those who have integrated can stay; but if you want to remain in your way of life, which is anathema to the West and is totally against our culture, you must go.â

Thatâs where we â¦ [second voice, inaudible] should stand.

Nigel Farage was left somewhat aghast at that. âThatâs strong stuff,â he mumbled.

OK, Iâm not going to go all Brit-centric on you. Thatâs not my country any more, and I watch what is happening over there with a calm, detached despair.

I am going to say, though, that this little exchange captures the zeitgeist in the modern West rather neatly, and the direction the zeitgeist is headed. To put it bluntly, itâs headed from Nigel Farageâs position to the callerâs.

Farage is a decent sort, and heâs done real service to his country, and to the West at large, by putting a cheerful, likeable, moderate face on national conservatism. That hasnât stopped the CultMarx screamers telling us that heâs Literally Hitler, of course. But the bar for being Literally Hitler is now so low that if you like your country, and would prefer it not be swamped with foreigners, then you too are Literally Hitler.

The zeitgeist is, though, moving in a certain direction, and I believe it will leave Farage behind. Earlier in that radio program heâd told listeners he couldnât agree with President Trumpâs executive order suspending entry to the U.S.A. for citizens of seven exceptionally disorderly Muslim nations.

The public in Europe is headed away from that mild, tolerant position to something closer to the callerâs. Farage, and European politicians of similar views, and possibly our own President, are transitional figuresâplace-holders, until someone more frankly and unapologetically nationalist comes along.

A very respectable British think tank, the Royal Institute for International Affairs, carried out a big survey between mid-December and mid-January, covering ten European countries, with at least one thousand respondents in each country, total more than ten thousand.

To the statement, âAll further migration from mainly Muslim countries should be stopped,â overall 55 percent of Europeans said they agreed.

In Nigel Farageâs Britain the figure was 47 percent.

Given that some unknown proportion of the surveyâs respondents must themselves have been Muslims, it would be interesting to see the survey re-done with respondents drawn only from the legacy populations. Iâm betting youâd get over half of legacy British peopleâI mean, white non-Muslimsâagreeing.

And Iâll further bet that ten years from now, that half will be three-quarters.

And note that the statement they were responding to in that survey doesnât restrict itself to seriously dysfunctional places like Somalia and Iraq. It covers all âmainly Muslim countries,â of which there are at least 48.

There are some suggestive counter-currents moving there, too, though. Hereâs a poll out of France, taken at the end of January, on support for the candidates in the upcoming presidential election there. It shows support for national-conservative candidate Marine Le Pen at its strongest in the 18-24 age group: 35 percent in that group, falling to just 16 percent in the 65-and-overs. 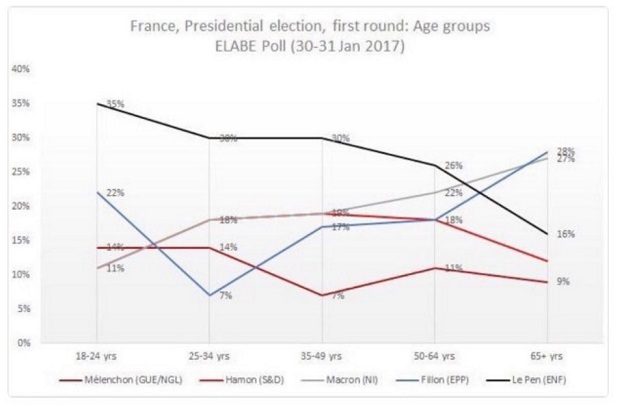 If Ms. Le Pen comes first in the April vote, it wonât be geezers who put her there, itâll be millennials.

I said the zeitgeist is moving in the nationalist direction, but it has a way to go yet. If Le Pen does place first in April, sheâll likely get swamped in the run-off vote in May, when voters for the other four candidates consolidate against her.

Dutch nationalist Geert Wilders is also looking strong for the election in his country next month; but not as strong as Ms. Le Pen in hers, and like her he faces opposition parties that will unite to keep him out of power. [Netherlandsâ Wilders not riding Trumpâs coattails, By Nick Ottens Leiden, EuOpinon, February 17, 2017]

So there is major support over there for demographic stability and national conservatism, but not likely major enough to be decisive this year, for all Mr. Wildersâ happy talk about a âpatriotic spring.â The wheel probably needs to turn a while longer before we see major electoral victories.

Itâs turning, though. Five years ago Le Pen, Wilders, and Farage were written off as extremist fringe candidates. The Brexit vote last June and Donald Trumpâs victory in November showed how much things have changed.

And just as here, public discussion about the National Question is all constrained in the narrow, dishonest vocabulary of âhate,â âracism,â and the rest. We have to work at changing that.

A person who opposes mass Muslim immigration may indeed hate Islam. I think Geert Wilders does. A great many other people, thoughâincluding this oneâdonât mind Islam at all, and wish nothing but long life and happiness to Muslims in Muslim countries everywhere. Theyâre entitled to live under their own laws and practice their own religion just as much as we are.

As we say here on the nationalist right: Thatâs what separate countries are for.

Muslims have forty-odd countries of their own to be Muslims in. Thatâs surely enough. And there is surely nothing hateful in saying so. Muslims in France: Some Data
Guillaume Durocher
• 566 Comments • Reply
← âAn Ocean ApartââWhy A U.S. Colle...Trump, Sweden, and Our Ableist, Insulat... →
Hide 189 CommentsLeave a Comment
"Forget Politiciansâthe People of the West Have Decided Against Muslim Immigration"
• 189 Comments
Commenters to Ignore
Commenters to ignore (one per line)