That headline raised my hackles right away. I am an LI [Long Island] immigrant, married to another Long Island immigrant. We’re supposed to be “coping” with something that ICE is doing? Living in a “climate of fear”?

The Derbs have no interactions with ICE at all, and our fears are in the standard late-middle-aged suburban homeowner range: crabgrass, tax audits, atrial fibrillation.

But of course the headline is CultMarx double-speak. The word “immigrant” is code for what our federal statutes refer to as an “illegal alien.”

As I keep wearily pointing out, not only is an illegal alien not an immigrant, he is positively a non-immigrant. So are most legal aliens. Before I got my green card in 1994 I entered the U.S.A. on permits stamped into my passport with the plain words NONIMMIGRANT VISA.

An immigrant is a foreigner who has been accepted by the authorities for indefinite settlement in the U.S.

All other aliens, surely including illegal ones, are non-immigrants.

So we are in the bizarro world of CultMarx polemics, where words are used in the opposite of their correct meaningâWar Is Peace, Freedom Is Slavery, and Non-immigrants are Immigrants. Got it.

So what’s this 4300-word story, around four times the length of a major broadsheet newspaper op-ed, about?

Fearing deportation, a Guatemalan cleaning woman in the country illegally has taught her children to go quiet when they hear a knock on the door at their Hempstead apartment. Under a policy enacted by President Donald Trump, federal agents looking for immigrants wanted for serious crimes could arrest and deport her, too.

More doublespeak there. The phrase, “Under a policy enacted by President Donald Trump” should actually read: “Under laws passed by Congress duly elected and assembled, according to the Constitution.”

But, needless to say, you won’t get two sentences into a piece of CultMarx propaganda nowadays without encountering the President’s name in some negative context.

The story continues in much the same vein for all 4300 of its words. You don’t have to have a heart of stone to find its efforts at tear-jerking strained and unconvincing:

About 55âor 10 percentâof the students at Suffolk County Community College who are in the country without authorization forgo in-county financial aid, according to Associate Dean Patty Munsch. [Email her] Under state law they must sign a notarized affidavit promising to seek legal status if possible, in effect outing themselves.

Why are legal immigrants entitled to food stamps? Put it another way, why are we admitting for permanent settlement people who can’t support themselves?

We never used to. For an immigrant visaâpermission to settle indefinitely in the U.S.A.âyou used to have to show you could support yourself and your dependants, and provide the name of a citizen guarantor to back you up. What was wrong with that arrangement?

Likewise, if ten percent of the illegal aliens at our Community College are forgoing financial aid, ninety percent aren’t. Shouldn’t college financial aid be for Americans?

Browsing Newsday at the town library through the weekâI refuse to pay money for the lying ragâI’ve been gratified to see that the “Letters” columns contain some scathing critiques of that story. A great many of my neighbors here in Suffolk County are glad to know that the people’s laws on entry and settlement are being enforced.

So Newsday, like much of the legacy print media, still holds on to some old-fashioned notions about fair play and letting dissenting voices be heard, even if the dissenting voices only get a couple of column inches on page A24 while the front several pages of the paper are wall-to-wall Ruling Class propaganda.

But when the final paper edition of Newsday rolls off the press, around five years from now, the last of the old-line liberals will have died or been pensioned off, and the legions of the Woke will be totally in charge. There will then be no more equivocation, no more of this mealy-mouthed petit-bourgeois “on the one handâ¦on the otherâ¦,” no more readers’ letters.

You will be told what to think in no uncertain terms; and if you dissent, your dissent will have no public outlet. 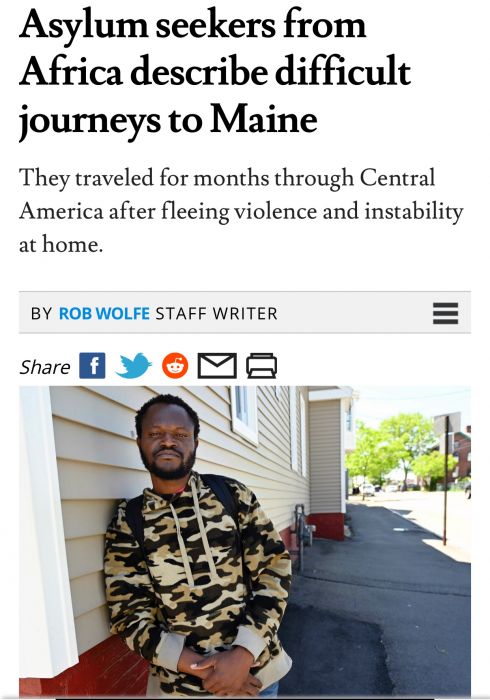 What I have described there is of course not peculiar to New York’s Suffolk County. Local newspapers are like this all over. Staffed as they are by second-raters and recent college graduates, local newspapers are even stupider and more rigidly ideological than the metropolitan broadsheets. Hereâs another example from the Portland Press-Herald out of Portland, Maine: Asylum seekers from Africa describe difficult journeys to Maine, by Rob Wolfe, June 12, 2019.

Portland ME has gotten itself a reputation for hospitality to “asylum seekers,” which is to say, border-jumpers and visa-overstayers who have memorized enough of a hard-luck story to get them past the perfunctory screening they’re given by the authorities.

We’ve been reporting on Portland for some years. Our own Patrick Cleburne noted back in 2014 that the state of Maine in general, and Portland ME in particular, are especially attractive to people from non-English-speaking African countries because of their exceptionally lush benefits:

That was five years ago, though; Portland ME is probably even more multilingual today.

This recent story is a collection of anecdotes targeted to tug at gentry-liberal heartstrings, anecdotes about the hardships endured by Africans making their way up through South and Central America to cross our southern border into the U.S.A., from whence they get transported up to the promised land of Portland ME.

Our treatment of these people, the story implies, is shamefully harsh:

Once the migrants apply for asylum, they must wait months to receive their work permits.

What kind of work will they do, once they get those work permits?

Mafumba [a political science professor back in the Congo] is weighing hospitality and tourism work, and also plans to go back to school. Nduluyele was a taxi driver in the Congo, and now hopes to make a living driving trucks. In the meantime, state and local social services will help to fill the gap.

Can’t we hurry up those work permits? Surely the authorities know about America’s critical shortage of French-speaking political science professors and truck drivers?

I have no access to the print edition of the Press-Herald. The online edition has only one reader’s letter on the so-called “asylum seekers,” urging “acceptance and compassion” for them by a reader who says she is “feeling saddened, helpless and fearful because of the state of the world.”

I did notice, however, this weaselly little footnote to the online version of the story, added in italics at the end. Quote:

Comments are disabled on some stories about sensitive topics. 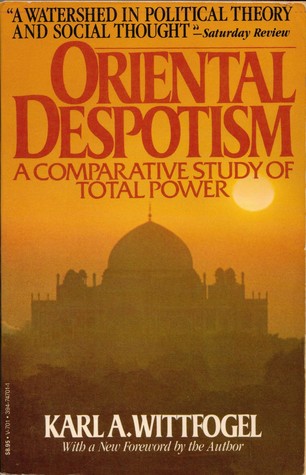 You see that, or something like it, rather a lot now where elite opinion is at odds with the views of the Great Unwashed. I predict you’ll see it more and more.

Then, one day soon, there’ll be no need for it, because everyone will have forgotten there was ever such a thing as a comment thread or a “Letters to the Editor” column.

Social media, increasingly repressive, are leading the way here. And soon there will be no outlets for opinion but social media.

We shall then be living in a society of the type the German-American sinologist Karl Wittfogel (Oriental Despotism) called a “beggar’s democracy“âa society in which citizens may hold what opinions they please, and express them freely to family members across the dinner table or to friends at the barâbut in which only one point of view is permitted in public forums.

John Derbyshire [email him] writes an incredible amount on all sorts of subjects for all kinds of outlets. (This no longer includes National Review, whose editors had some kind of tantrum and fired him.) He is the authorof We Are Doomed: Reclaiming Conservative Pessimism and several other books. He has had two books published by VDARE.com com: FROM THE DISSIDENT RIGHT (also available in Kindle) and FROM THE DISSIDENT RIGHT II: ESSAYS 2013.
>