If you pay any attention at all to non-political news, you know that the Soccer World Cup is being played in Russia. We just got through with the semifinals, and now know that the final, for the championship, will be played between France and Croatia this Sunday, July 15th, in Moscow.

The last semifinal game was played this Wednesday between England and Croatia. Croatia won the game, two goals to one. A couple of my acquaintances thought I must be in distress about this, being English by birth, and sought to console me.

I appreciate their kindness, but it’s misplaced. For one thing, I’m not English. I have the immigrant’s sentimental attachment to the Old Country, but in a very mild form. Since getting naturalized sixteen years ago I’m a happy and patriotic American, with no other national loyalties. I’m one of the 44 percent of Americans who’d be willing to fight for America, supposing my sorry old hide would be any use in a real fight.

If England got into a war I’d cheer them on, but wouldn’t do what David Niven did. Niven was a Hollywood star already in 1939; but the day after Britain declared war on Germany in September that year, he sailed for home and rejoined the British Army. He was still a British citizen, though. I’m an American.

For another thing, I have no interest in soccer. I actually dislike the game. I once wrote a column arguing for soccer to be banned from the U.S.A. by constitutional amendment.

My secondary school played rugby, not soccer. In England there is â or was, when I lived there â a clear class line between the two sports. Working-class boys played soccer; the middle classes preferred rugby. As the saying went: Soccer is a game for gentlemen played by hooligans, rugger is a game for hooligans played by gentlemen.

The class angle is different here in the States. When I wrote that anti-soccer column back in 2000, political pundits were all talking about soccer moms and the soccer mom vote. Middle- and upper-class American parents were encouraging their kids to play soccer, apparently because they thought it European, and therefore classy, like French wine, German cars, or British tailoring. Plainly these soccer moms had never met a European soccer fan.

Now, a couple of decades on from that, we don’t hear much about soccer moms. I have the vague impression soccer’s gone downmarket in American public consciousness, associated now more with Mexican busboys than with Beaujolais, BMWs, or Burberry raincoats.

Possibly mass immigration has cured the American middle classes of their infatuation with soccer. For me, as a patriot and soccer-hater, that’s nothing but good news. Even mass Third World immigration has an upside, I guess.

Now you may say: OK, Derb, but you must at least allow that soccer enthusiasm is a last refuge of masculinity. No doubt there are female soccer fans, but they’re a rare species, and probably lesbians.

Well, yes, but what kind of men are we talking about? My own prejudices aside, the real case against soccer, and against mass sporting enthusiasm in general, is the bread-and-circuses case. Events like the World Cup are spectacles designed to distract our attention while ruling elites pick our pockets.

The vlogger who calls himself Black Pigeon had a good piece on this theme the other day. He raises the case of the disturbances in London last fall, when thousands of supporters of the German soccer team from Cologne demonstrated angrily in the streets of London. Cologne was playing Arsenal, a London team, and the Cologne supporters didn’t think they’d been allocated enough tickets. They shut down traffic in central London.

Where, Black Pigeon asks pointedly, were these bold lads from Cologne when the women of that city were being molested by gangs of Muslim invaders at New Year’s 2016? There was some grumbling about those attacks when news of them finally leaked out, and a few half-hearted demonstrations by twenty or thirty people â who were promptly arrested by the German authorities, of course â but nothing like the fired-up mob of thousands of soccer fans who shut down London last September over an issue of seating arrangements.

The ruling elites of Europe are wonderfully skilled at directing the natural tribal emotions of young European men awayfrom their proper outlet â the defense of their homelands against invading foreigners â and towards the bread and circuses of pseudo-nationalist extravaganzas like the World Cup.

As if to rub in how phony it all is, the big European countries field teams hired in from the Third World.

The team that won the 1966 World Cup for England was entirely English. Not even British, but actually English; if memory serves, every one of them was born in England, although the right back had a Jewish great-grandfather.

So that’s today’s young European guy: Cowering fearfully at home while mobs of foreigners rule the streets, torching cars and molesting women; then turning out fired up with pseudo-tribal passion to watch hired-in teams of those same foreigners kick a ball around for ninety minutes.

Having gotten all that sourness off my chest, I’d like to add a friendly word for the Croatian team that beat England on Wednesday. Well done, guys!

Thirty years ago there wasn’t any such country as Croatia; it was part of the old Yugoslavia. Now here they are, a nation of four million people, humbling England, population 56 million â not to mention Nigeria with 186 million, Brazil with 209 million, India with 1.3 billion, and China with 1.4 billion.

And so far as I can judge from the faces, and the sheer number of diacritical marks used to spell their names, they are all Croatian! 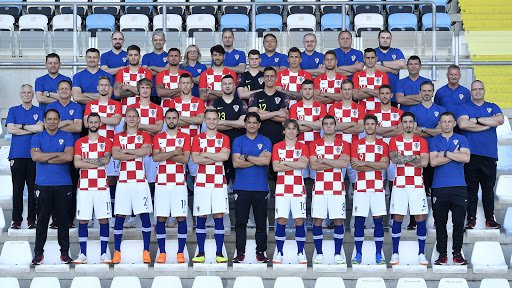 Tell you what: This weekend I’m going to suspend my disdain for soccer as best I can and root for Croatia in Sunday’s final. I may even stay awake through the whole game if it means watching MandÅ¾ukiÄ, PeriÅ¡iÄ, KaliniÄ, and KramariÄ beat Nzonzi, Umtiti, Dembele, and Mbappe. ← Ice People (Including Bruce Lee) Under ...From the Email Bag: Fighting for Your C... →
Current Commenter
says:
Current Date at Time Now
Leave a Reply - Comments on articles more than two weeks old will be judged much more strictly on quality and tone
Cancel Reply
Commenting Disabled While in Translation Mode