Steve Sailer captured post-1965 U.S. grand strategy very neatly with his phrase “invade the world, invite the world.” It’s the inviting that we mainly concentrate on here at VDARE.com, but the invading is worth citizens’ attention, too. As Steve’s phrase suggests, the two things are not unconnected. 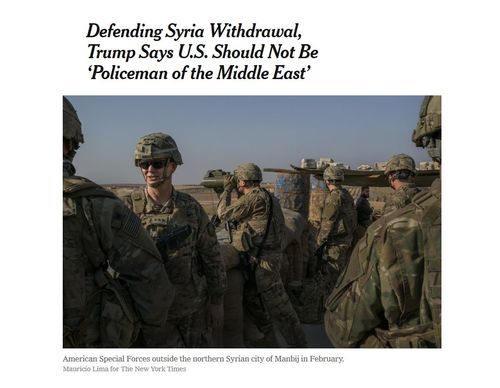 We have done an awful lot of invading this past half-century, most of it to no point at all, and at a cost of thousands of American lives and trillions of dollars.

Candidate Donald Trump on the 2016 campaign trail seemed to get the futility of it all. He talked of bringing our troops home, advised South Korea to nuke up, said we should withdraw from NATO and shut down our missionary wars in the Middle East.

Millions of us responded eagerly to all that, as we did to his talk of bringing order to our immigration system. That’s how Trump got elected.

Two years later, very little has actually been done on either clause of Steve’s phrase. We’re still inviting the world on a huge scale, a scale that makes sense only to cheap-labor lobbyists and anti-white ethnic ideologues. And yes, we’re still invading the world. We’re still in NATO; we still have 26,000 troops in Korea; our war in Afghanistan is in its eighteenth year, with one-eighth of the country under enemy control and one-third “contested.” [Taliban control of Afghanistan on the rise, US inspector says, by Kara Fox, CNN, November 8, 2018]

The President, in that careless, half-hearted way he has, threw us a small bone last week by announcing that we would withdraw all our troops from Syria and half from Afghanistan. The news is welcome, but it’s way too little.

Why is Trump so half-hearted, so timid?

Did you ever think you’d hear the words “Trump” and “timid” in the same sentence?

I don’t know how else to describe the President’s actions, though. I long to see him throw down gauntlets, challengethe Executive apparatchiks, the Congressional seat-warmers, the puffed-up Judiciary.

There are so many gauntlets he could throw down. Just at random from this week’s browsing: A long, closely-argued piece on the CIS website by immigration wonk Andrew Arthur making the case that Trump can, by himself, make E-Verify mandatory. Quote: “All that it requires is the will, and 60 days’ notice before implementation.” [Could the President Mandate E-Verify? Probably â IRCA is looser than you might think, December 28, 2018]

Where’s the will, Mr. President? Sure, the congresscritters will screech and the Leftist judges will frown; perhaps they could stop what you’re trying to do. The only way to find out is to try doing itâto throw down the gauntlet.

So thanks for the Syria bone, Mr. President. Could you now try something big, something bold, even if it makes Ivanka cry?

F.H. Buckley (no relation!) just had a good column on the withdrawal from Syria, pointing out that in all these stupid, futile interventions we have had help from local people who saw us as on their side, and put themselves in danger to help us [Trump may have gone too far by abandoning the Kurds, New York Post, December 27, 2018]

When we pull out our troopsâBuckley is speaking specifically of Syria, and the Kurdsâwe are leaving those allies to their fate, which may not be a happy one.

But, as Buckley points out, we’ve been here before. After Vietnam fell in 1975 we admitted hundreds of thousands of South Vietnamese. A lot of them just didn’t want to live under Communism, but some significant proportionâI’d like to see an estimate of that proportion, though I never haveâhad actively helped us in South Vietnam and were in real danger.

There are people in Iraq, Afghanistan, and Syria today in that same position. Notably so are the Kurds of northern Syria who have actually been fighting alongside American troops against ISIS. The Kurds face hostility not only from the Syrian government, but also from Turkey, which has a longstanding policy of crushing Kurdish separatism.

The situation of the Kurds is tragic to be sure, and they attach a nontrivial moral issue to our withdrawal from Syria. I mean them no disrespectâin a world ordered by me, they’d have their own country.

That said, I could not help but smile when reading the December 20th Washington Post story about the Kurds’ reaction to Trump’s decision. Longish quote:

The decision represented yet another setback to Kurdish aspirations for some form of statehood, which have repeatedly met disappointment at the hands of the United States. The letdowns began after President Woodrow Wilson pushed for but failed to secure a separate Kurdish state at the 1919 peace conference following World War I, which drew the borders of the modern Middle East.

Kurds say the hopes they have since placed in the United States have continued to be dashed. In 1975, the United States abandoned support for a Kurdish uprising in Iraq after President Saddam Hussein struck a deal with their ally, the Shah of Iran. In 1991, President George H.W. Bush encouraged Iraqis to rise up against Saddam, but when Kurds in the north and Shiite Arabs in the south responded to the call, the U.S. military refrained from going to their aid. Most recently, the Trump administration last year withheld support for an independence referendum in Iraqi Kurdistan, and Iraqi troops rolled unopposed into areas the Kurds had controlled. [This time, the United States is betraying more than just the Kurds, allies say , By Liz Sly, December 20, 2018. Emphasis added]

Again, I don’t wish to be unkind, and this smile I’m sporting is a grim one; but given that we’ve been letting them down since 1919âthat’s a hundred years, guysâit’s kind of amazing that any Kurds still trust us.

Yes, we should pull out of all these places, while swearing a solemn national oath that any future wars we fight abroad will be won quickly, not lost slowly.

And I can’t believe it is beyond our abilities to identify people with a clear claim on our sympathies, and offer them asylum as we pull out.

That’s what asylum should be for. Instead we’re handing it out to hundreds of thousands of liars and crooks from Central America, carefully coached by the people-smugglers with tales of violence and danger.

If these parasites and scofflaws continue to get asylum while we refuse it to Kurds and Afghans who have actually fought alongside us, that would be a monstrous national disgrace.

Cautious Optimism on Turks and Kurds
Israel Shamir
• 155 Comments • Reply
← We Are Doomed RevisitedDECEMBER DIARY: Mexico Leads the Way; T... →
Hide 60 CommentsLeave a Comment
"Asylum Is for U.S. Allies Like the Kurds, Not Parasites and Scofflaws from Central America"
• 60 Comments
Commenters to Ignore
Commenters to ignore (one per line)