Jorge Ramos, âone of the most influential journalists of the day,â has a one-hour talk program on the Fusion TV channel Tuesday nights, with repeats through the week. Name of the program: âAmerica.â

On this weekâs program Ramos interviewed Ann Coulter, whose latest book,Adios, America! The Leftâs Plan to Turn Our Country into a Third World Hellhole, is to be published on Monday, June 1st.

Wednesday afternoon my VDARE.com colleague Alan Wall alerted us to the interview, with a 1m49s video clip from YouTube. [âAnn Coulter: âIf you donât want to be killed by ISIS, donât go to Syria.ââ]

About the same time a reader sent me a 4m46s clip from the interview via Breitbart. [Coulter to Ramos: You are a Cultural Imperialist.]

Good stuff! Ann looked to be on great form in the interview, kicking the smarmy, sinister Ramos all over the studio.

In the first of those clips Ramos tries to fix an HBD sticker on Ann:

He: âDo you think that people are biologically predisposed to commit crimes?â

She: âNo. I think there are cultures that are obviously deficient; and if they werenât deficient, you wouldnât be sitting in America interviewing me, Iâd be sitting in Mexico. You fled that culture â¦â

Ah, culture! The phlogiston, the luminiferous Ã¦ther of social-science explanation! Heaven forbid we should think that biology accounts for anything!

In fact people are biologically predisposed to commit crimes. Antisocial behavior, like all other dimensions of personality, has a large heritable component.

But bringing forward hatefacts like that will get you shut out from major media outlets, though. Ann was wise to duck as Ramos lunged forward with the HBD sticker.

In fact, my impression is that Ann, who is a creationist, is genuinely skeptical of biology and truly believes the blank-slate âcultureâ flimflam. Thatâs OK: if culturism works as a debating point against the demographic transformation of the U.S.A., letâs use it.

Ramos was out of his depth against Ann, lumbering around the ring ineffectually like Liston against Ali as Ann bobbed, weaved, ducked, and landed the occasional solid punch.

She missed one or two good counters, though, as one is bound to do when arguing on the fly.

Thus in Ramosâs mind, the great Immigration Pause from 1924 to 1965 never happened; the labor-led immigration-restrictionist movement of the early 20th century had no result. That would have been good for at least five minutes tossing and goring, if Ann had picked up on it.

Still, it seems to have been a fine spirited performance by the ladyâone of the few strong immigration patriots now permitted on TV.

Eager to see more, I went downstairs and switched on my TV, hoping to catch one of the repeats. I called up the channel numbers for Fusion, but only got messages telling me Iâd have to pay for a subscription.

That goes against the grain. Weâre basic-subscription consumers of cable TV, aside from a brief foray last year into the streaming Netflix service. (Which turned out to have far fewer selections than the DVD-by-mail option.)

Googling around, I see that Fusion is a joint business venture by Univision and the Walt Disney Company. Given that Univision is a Reconquista-ethnocentric outlet, and that Jorge Ramos is indeed a Hispanic cultural imperialist, and that Disney is in the forefront of corporate Americaâs push to replace our nationâs native-born labor force with cheaper foreigners, I decided I donât want to take the risk of adding anything to Fusionâs revenuesâeven for purposes of journalistic due diligence.

Put it another way: You couldnât pay me enough to support these scum.

Googling some more, I turned up Fusion TVâs mission statement, or at least self-description. They are, they tell us:

Championing a young, diverse, and inclusive America with a unique mix of programming that includes original reporting, investigative journalism, coverage of pop culture, satire and comedy, as well as original series and documentaries.

Processing that through my Marghanita Laski de-euphemizer (Ms. Laski was the writer who translated the expression âeconomy designer couture for the mature fuller figureâ as âcheap ugly dresses for fat old womenâ), I find that Fusion TV is vapid CultMarx fluff for Pajama Boy types who find MSNBC too cognitively challenging.

So no, I donât want to subscribe to Fusion.

Still, I did want to see more of the Coulter-Ramos punch-up, so I went back to YouTube. Here I found a couple more short clips.

In Ann Coulter refuses to hug immigration activist, Ann takes an audience question. A morbidly obese Mexican woman waddles up to the mike and asks: âCan I give you a hug?â

Ann politely declines, telling the woman she is recovering from flu. Nothing deterred, the woman presses her suit. After identifying herself as an illegal alienâshe of course says âundocumented immigrantââshe declares that she âwants to, as a sign of my humanity and yours, recognize you and say, âCan I give you a hug?ââ

Itâs a cute little attempt at a sentimentalizing power play; and goodness knows, sentimentalizing the immigration issue has worked wonders for open borders activists. Hard to blame the woman for trying it.

Ann is too smart for this stuff, though; or perhaps she feared permanent skeletal damage in an embrace from this particular embodimentâor enlardmentâof the undocumented community.

âNo, letâs get on with the question,â says Ann briskly. The clip ends without us hearing the question, though.

In a second clip, Ann Coulter: âYouâre not black, so drop the racism crapâ, a young man from Honduras identifies himself as a legal resident who will soon attain citizenship.

He then plays the white-guilt card:

He: âDealing with immigration, donât you think that this will be more as a discrimination or racism [sic], and basically the United States should be a country that shows the world that racist [sic] is a bad thing for everybody?â

Ann: âItâs not about race, itâs about culture.â

Ann has been showing clear signs of restlessness through the young chapâs clumsy, incoherent attempt at guilt-tripping. Now she comes back with the not-race-but-culture line. There is a brief joust, then Ann delivers her punch line: âThe answer is: Youâre not black, so drop the racism crap.â

Itâs marvelous to see this splendid patriot defending her positions with such vigor and skill, shoving the dishonest, guilt-tripping, sentimental pap of the invaders and cheap-labor shills right back in their faces.

Ann Coulter says as much as can be said in the present cramped, hypocritical state of our public discourse. She goes as far as anyone can to go without her TV hosts dragging out the fainting couches and summoning the Thought Police.

Damn good luck to herâand all success to this latest book. 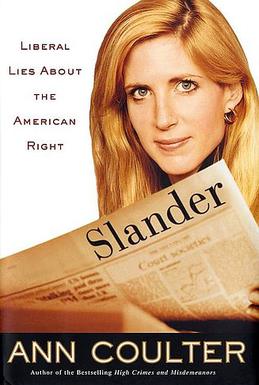