I have mixed feelings over expressing my disappointments with the Trump administration. I voted for the guy; Iâd vote for him again against any Democrat I can think of, and most Republicans.

And hey: We got Jeff Sessions at Justice, and a Supreme Court Appointee who isnât an anti-white, man-hating Social Justice radical. So Iâm still hoping for the best.

And, Iâll say this for President Trump: Heâs still hated by all the right people. Boy, how they hate him! Trump Derangement Syndrome shows no sign of abating. If anything, it seems to be getting more intense.

One of many recent examples: The New Yorker magazine, as I mentioned in my April Diary, just had a 4,000-word anti-Trump philippic by the editor, David Remnickâand a week later a much longer piece, nearly ten thousand words, by notorious staff writer Evan Osnos [Email him] Endgame: What would it take to cut short Trumpâs Presidency? [May 8, 2017]

Osnos stops short of calling for an assassination, but probably only because New Yorker doesnât want the FBI banging on its door. Still, as in the late Soviet Union, when physical elimination is bothersome, you can always incarcerate an Enemy of the People in a psychiatric ward. Osnos actually considers this possibility at length, as well as impeachment, a remedy that was (of course) utterly unthinkable when VDARE.com proposed itâquite appropriatelyâ in the case of Obama back in 2014.

But now my disappointments:

Three weeks ago, I grumbled about what I called The Big Cuck. Last week, I upgraded my disgust: not merely a Big Cuck, a Cuck-o-rama. Following the congressional budget deal announced Sunday night, Iâm going to have to take it to the next level: no transient, footling Cuck-o-ramaâthis is the Acuckalypse!

Note the word âminorityâ in the congressional titles of both Schumer and Pelosi. As representatives of the minority in both Senate and House, how were these reptiles able to get their way on a major issue in the Trump electoral agenda? What was the majority doing while the minority killed off the biggest vote-getter of the last election season?

Cucking, thatâs what. You remember that TV show Bowling for Dollars? Well, the GOP congresscritters are cucking for donors.

Thus not only did last weekendâs spending bill trash the wall, it also allowed a big expansion of H-2B guest-worker visas. CITE

The H-2B visa is for low-skilled seasonal, non-agricultural workers. Landscaping firms use them, for example: not much landscaping work gets done in the winter. Logging companies, which donât count as agricultural, use them. So do summer resorts and amusement parks. National parks, too: If you stopped off for a snack at Yosemite Lodge Food Court last summer, that young lady from Kazakhstan who served you was on an H-2B visa.

A good alternative name for the H-2B visa would in fact be the Keep American Kids Out of Summer Vacation Jobs visa.

Apologists for the visa tell you they canât get American teenagers to do these jobs. I donât know which teenagers theyâre talking about. My son, who is not sensationally industrious, used to work landscaping in the summer vacation w hen he was at high school. His best friendâs father owns a landscaping firm, so the two lads would work together for him. My boy greatly appreciated the few dollars he made landscaping. Is he really such an outlier among American youngsters?

Donât take it from me. Hereâs Daniel Costa (right) of the Economics Policy Institute testifying before a Senate committee last June:

Despite â¦ claims from industry groups â other than employer anecdotes â no credible data or labor market metrics have been presented by non-employer-affiliated groups or organizations â let alone by disinterested academics â proving the existence of labor shortages in H-2B occupations that could justify a large expansion of the H-2B program.

A âlarge expansionâ is what we just got, though. Whatâs going on here is of course the same thing as with the H-1B for skilled workers. In a nutshell: Foreigners are cheaper.

This didnât come out of the blue. Congressional donor-puppets have been scheming to get H-2B expansion into the first available piece of spending legislation since the last expansion in 2015. Hereâs a report from Politico.com:

The H-2B Workforce Coalition, a lobby group that includes dozens of business associations, wants the visa total to rise again

Thereâs bipartisan support for an expansion: 32 Republican and Democratic senators sent a letter to DHS Sec. John Kelly in March to protest the limited number of visas. In addition, Sens. Tom Tillis (R-N.C.) and Angus King (I-Maine) have cosponsored legislation that would make the exemption permanent.

you heard the word âbipartisanâ in there. There is nothing in this world so bipartisan as a measure to screw American workers. H-2B expansion is, plain and simple, about importing cheap labor. And GOP congressroaches are totally on board with that.

A side benefit is of course to enrich lawyers. We mustnât forget the lawyers! Applying for H-2B visas is a long and complicated process â so much so, there are lawyers who specialize in that one visa.

And because, as everyone knows, immigration is an unqualified good, and ours is a nation of immigrants, and American workers are lazy and useless, these immigration lawyers are doing Godâs work.

Here by the way is the next sentence from that April 14th Politico report:

You might expect an âAmerica Firstâ president to oppose the H-2B program, but President Trump has steered clear of the issue so far.

Iâm not going to trust myself to comment on that. I leave it there for your reflection.

Note one: Foreigners who donât want to go to the trouble of acquiring an H-2B visa or some other guest-worker visa can just get a tourist or student visa and overstay it. 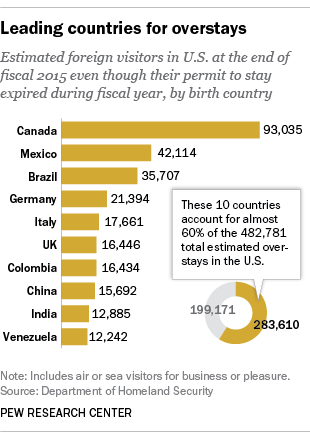 Huge numbers of foreigners do this. How many? In 2015, for the first time ever, the Department of Homeland Security tried to find out. In February last year they produced a report. [Homeland Security produces first estimate of foreign visitors to U.S. who overstay deadline to leave, By Jeffrey S. Passel and DâVera Cohn, February 3, 2016]

In that year, the year 2015, the report says that 45 million non-worker visas â these are tourist and business visas â 45 million visas expired. Of that number, more than 400,000 visa holders â a bit less than one percent â overstayed. Lead countries for visa overstays: Canada, Mexico, Brazil, Germany.

The problem here is crappy IT. Quote from a Daily Caller report by Ethan Barton, May 4th, quote:

Information on visa holders is held in 27 DHS information technology systems that canât communicate with each other.

Obviously the DHS needs to upgrade its IT. If theyâll drop me an email here at VDARE.com I can put them in touch with a body shop in India that will be glad to send over as many IT programmers as they need on H-1B visas. Just let me know.

Note two: Numbers USAâs Chris Chmielenski has pointed out in an email that spending bill

gives the Administration full authority over the visa increase. Weâre hoping that the Administration will tell Congress âthanks, but no thanksâ on the increase and remain true to Trumpâs campaign pledge to protect the jobs and wages of American workers.

But why are we having to sit around âhopingâ anyway?

← April Diary: Righting the Worldâs Wro...Nixon and Moynihan on Race and IQâKno... →
Current Commenter
says:
Current Date at Time Now
Leave a Reply - Comments on articles more than two weeks old will be judged much more strictly on quality and tone
Cancel Reply
Commenting Disabled While in Translation Mode