The late queenâs lady-in-waiting has resigned and apologised after a black guest at a reception hosted by the queen consort was left feeling traumatised and violated after she questioned her repeatedly about where she âreally came fromâ.

Ngozi Fulani, the founder of the charity Sistah Space, claimed Susan Hussey moved her hair to reveal her name badge and persistently questioned her over where her âpeopleâ came from, despite having been told she was a British national.

A spokesperson for the Prince of Wales, who is Lady Husseyâs godson, said the comments were unacceptable and that âracism has no place in our societyâ.

The encounter on Tuesday at a violence against women and girls reception was witnessed by two other women: Mandu Reid, the leader of the Womenâs Equality party, who is of mixed heritage, and another black female charity representative.

Hussey, 83, the widow of the former BBC chair Sir Marmaduke Hussey, had recently been appointed one of the ladies of the household. She is a close friend of the king. Her daughter, Katherine Brooke, has just been appointed as one of Camillaâs new queenâs companions.

Buckingham Palace described the remarks as âunacceptable and deeply regrettableâ. Hussey has offered her âprofound apologiesâ for hurt caused and resigned her honorary position with immediate effect.

Here is Ngozi Fulani’s description of the conversation:

Lady SH: Where are you from?

SH: No, where do you come from?

Me: Weâre based in Hackney.

SH: No, what part of Africa are YOU from?

Me: I donât know, they didnât leave any records.

SH: Well, you must know where youâre from, I spent time in France. Where are you from?

SH: NO, but what Nationality are you?

Me: I am born here and am British.

Me: âMy peopleâ, lady, what is this?

SH: Oh I can see I am going to have a challenge getting you to say where youâre from. When did you first come here?

Me: Lady! I am a British national, my parents came here in the 50s when â¦

SH: Oh, I knew weâd get there in the end, youâre Caribbean!

Me: No Lady, I am of African heritage, Caribbean descent and British nationality.

… [Fulani] wrote: âThere was nobody to report it to. I couldnât report it to the Queen Consort, plus it was such a shock to me and the 2 other women we were stunned into temporary silence. I just stood at the edge of the room, smiled & engaged briefly, with those who spoke to me until I could leave.â

She added: âIt was such a struggle to stay in a space you were violated in.â

She told the Guardian the first âno noâ was Hussey moving her hair.

âHere I am in this place as part of the 16 days of activism, experiencing non-physical violence

“Non-physical violence” is good, but “hair rape” would be better. 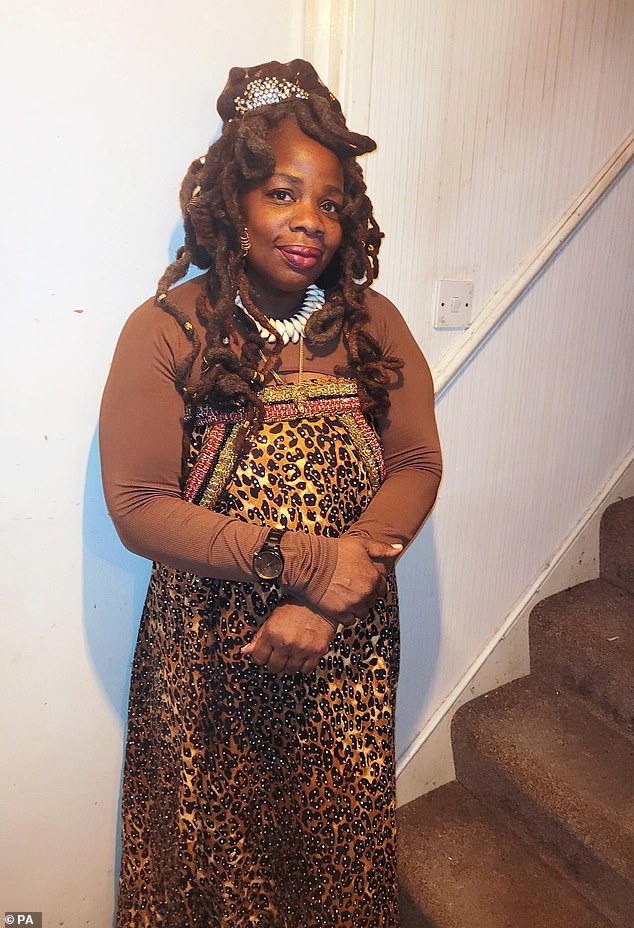 As commenter JCD1974 points out, “You canât blame the old woman when the black woman looked like she was in costume as an African queen, complete with leopard print dress, a bone necklace and a tiara in her dreadlocks.” She’s dressing like a discount version of Eddie Murphy’s mother, the Queen of Zamunda, in Coming to America.

She said she had ânever felt so unwelcome or so uncomfortableâ.

She said: âI was almost forced to say that Iâm not really British. I donât know what she meant by âmy peopleâ. It was incomprehensible for her to consider that I have British citizenship. When she heard my parents were from the Caribbean she said: âFinally we are getting somewhereâ â¦ It was overt racism.

Of Husseyâs resignation, she said: âItâs tragic for me that it has ended that way. I would have preferred that she had been spoken to or re-educated.â …

She suggested the palace household could benefit from cultural competency training of the sort run by Sistah Space.

Call now. Sistah Space’s operators are standing by to take your orders for their cultural competency training. After all, you wouldn’t want this to happen to you.