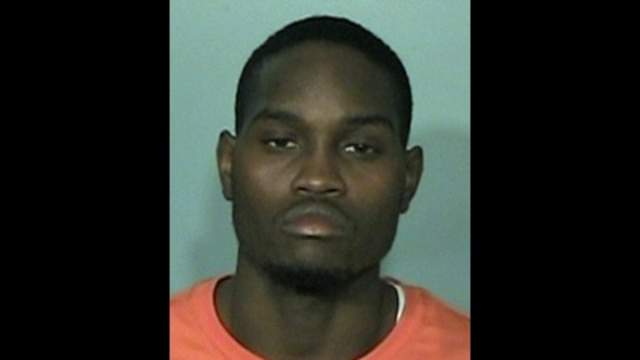 Police arrested 19-year-old Ahmaud Marquez Avery (pictured below), who is not a student at Brunswick.

“The man ran through the parking lot.

He didn’t run. He was a jogger!

I tried to get him to stop as well. He would not stop for us,” said Glynn County Schools Chief of Police, Rod Ellis. “We ended up chasing him to the back of the school were other officers helped us apprehend him.”

Ellis said the .380 caliber semi-automatic handgun slipped out of the teen’s pants.

The man, identified by Schools Police Chief Rod Ellis as 19-year-old Ahmaud Marquez Avery, ran when Vicent tried to stop him, said Ellis, who was on alert in his police vehicle in a parking lot because of a nearby chase involving Brunswick police.

Ellis said he drove alongside Avery with his gun pointed at him as Avery ran along a sidewalk in front of the school. After being ordered to stop several times, Ellis said Avery ran between buildings to the back of the school, where two officers cornered him and arrested him.

“Once he was handcuffed, the offender confirmed by exculpatory statement that he was indeed armed, but he had dropped the weapon in his attempt to escape,” Ellis said.

Avery is charged with two felonies, possession of a weapon on school property and obstruction of an officer with violence, and a high and aggravated misdemeanor of obstruction of a public school. Ellis said other charges may be pending.

This could be simply be a typo on a police form, a simple lie, or maybe he changed his name.

I’m speculating that this 2020 incident was not between strangers, as the MSM has been implying for weeks now, but between people who had some past history with each other.

It’s remarkable how often the Prestige Press manages to find somebody to sanctify who is a real dodgy character. Alternatively, how often do they find somebody who is even an okay guy?

Off the top of my head, Philando Castile of Minnesota seems like a workingman who had held the same job for 13 years when he was killed by that diversity hire Hispanic cop. He’d had a lot of minor brushes with the law over driving without insurance and driving without a license, but his record was not so bad that he couldn’t get a license for a legal gun.

But it is remarkable how out of touch the national media is that they so frequently put all their chips on bad actors.

Save ListCancel
Endorsed Only
Trim Comments?
• LOL: The Germ Theory of Disease
• Replies: @Jake
@Bardon KaldianMacDonald is 'wrong' because he is fighting a war on a front that barely means anything.

Naturally, the kulturkampf means that per capita Jews will always lead in every way, because a Jew is defined by being anti-Christ. But it is also true that Jews could achieve very little in acting to pervert Christendom and its legacy nations if their peoples were not prone to similar rebellion against Christ and Christendom.

For example, the Reformation was a major world war against Christendom. Jews served as major players in all areas of financing Reformation, and in printing Reformation materials. But Jews could do that only because men - white men - chose to rebel.

Kevin MacDonald's work will mean little in the kulturkampf unless he converts to either Latin Mass Catholicism or to Eastern Orthodoxy and reconfigures his ideas from Darwinian evolution to historic Christendom.Replies: @James O'Meara, @Bardon Kaldian, @utu, @Farrakhan.DDuke.AliceWalker.AllAgree
, @kaganovitch
@Bardon Kaldian Very few of them knew anything about Judaism (I think only Fromm was well informed);

Not that I hold any brief for Kmac, but Freud was much better informed about Judaism then he let on. For chapter and verse see