This place looks nice (except for the tank)

There’s much discussion in the press about where it would be best for Arab refugees from Syria to settle: Would they be best off in Munich? London? Reykjavik? Or Minneapolis? Which white people most need the blessings of diversity provided by Sunnis and Shi’ites? (Obviously, Syrian Arabs couldn’t go to other Arab countries like Qatar. Don’t be silly.)

The sophisticated reasoning of 2015 is that if you and your countrymen blow up your own country through your sheer mutual bloodymindedness, you therefore have an unassailable moral claim to inhabit the nicest countries on other continents. If you are a young fellow in your prime, why should you have to settle for a refugee camp in neighboring Turkey when there are Swedish girls unmolested in Malmo and English girls unpimped in Rotherham?

Think of The Children! 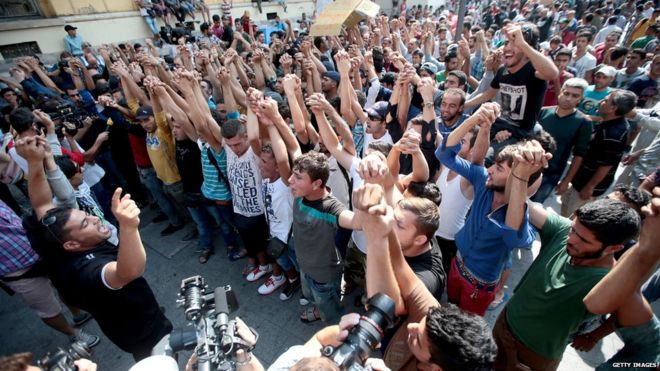 More of The Children:

Granted, most of the other times the West has imported lots of Muslims, we just wound up with dead cartoonists and gang-raped 12-year-old girls all over the place.

But, that’s irrelevant, because This Time Will Be Different!

Or maybe just because you shouldn’t mention the other times. It’s not nice.

Yet, it only now occurred to me that there is a place that would be ideal for Syrian refugees. I’ve never heard it discussed in the press as a natural refuge for Syrians, but:

– It has great views.

– It has a lovely sunny climate

– Yet the temperatures are mild and there is good rainfall for agriculture due to the moderately high altitude (about 1,000 meters on average).

– This place even has a ski resort! (It doesn’t, however, seem to have any golf courses, but as the picture at the top shows, it has lots of rolling open land ideal for golf.)

– It’s quite under-populated relative to its carrying capacity. It’s hard to find exact numbers, but this region appears to be about 500 square miles in size with a present day population of somewhere around 40,000.

– The population today seems to be less than half of what it was a half century ago.

– And yet, this region is an island of peace and law & order under a strong, sophisticated government in a state with a prosperous economy.

– If there is any government in the world hardnosed enough to keep Syrian Sunnis and Shi’ites from killing each other, it’s this government.

– In fact, a fair number of Syrians are descended from people who used to live there. Some of the middle-aged and elderly Syrian refugees even lived here themselves before being driven out.

– Indeed, this place is still recognized as Syria’s own national territory by almost all the countries of the world.

Why, the Golan Heights, of course.

But, for some reason, the American press never seems to bring up the Golan Heights as a natural destination for Syrian refugees.

Instead, Syrians should all move to Europe.

Or maybe to America.

It’s inevitable. There is no stopping them.

Except they seem to be completely stopped from moving to the Golan Heights, which looks like a pretty okay place.

But the Golan Heights never seems to come up.