From an op-ed in the New York Times:

Whatever Happened to German America?
By ERIK KIRSCHBAUM SEPT. 23, 2015

Berlin â WHAT is Americaâs largest national ethnic group? If you said English, Italian or Mexican, youâre wrong. Today some 46 million Americans can claim German ancestry. The difference is, very few of them do. 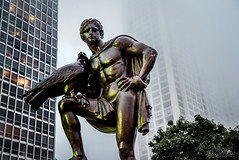 By the way, some of these Census Bureau ancestry figures, where respondents are asked to identify with a single European nationality, rise and fall due to fashion. Choosing “German” has been rising and “English” has been falling, but I doubt if the underlying genetics are changing very fast. A term like “Old Stock American” would probably be more useful in describing all those Smiths and Millers, Earnhardts and Heinleins of predominantly mixed Northwest European ancestry. But “old stock” is out of fashion — the PM of Canada recently got in trouble for referring to “old stock Canadians.”

Indeed, aside from Oktoberfest, German culture has largely disappeared from the American landscape. What happened?

At the turn of the last century, Germans were the predominant ethnic group in the United States â some eight million people, out of a population of 76 million. New York City had one of the worldâs largest German-speaking populations, trailing only Berlin and Vienna, with about a quarter of its 3.4 million people conversing auf Deutsch.

“Trump” is one of the remaining New York City German names.

As they spread through the country, they founded church denominations, singing societies, even whole industries â pre-Prohibition brewing was dominated by Germans, whose names live on in brands like Pabst, Busch and Miller. Their numbers shaped the media â there were 488 German-language daily and weekly newspapers around 1900 keeping the language and culture alive â and politics: Midwestern German-Americans were a backbone of the early Republican Party.

The enormous number of German-Americans was also a factor in keeping the United States out of World War I for so long â activists lobbied against intervening on the Alliesâ side, while politicians worried about losing a sizable voting bloc.

It’s also that German-Americans tended to be less militaristic. The U.S. got a large proportion of Germans in Amish or Quaker-like quietist sects, liberal 1848ers, and other Nice Germans, leaving Germany with a higher proportion of Not Nice Germans.

Partly for that reason, when the United States did enter the war, German-Americans came under intense, and often violent, scrutiny, especially after the revelation of an ill-conceived German plan for Mexico to invade the United States.

There had long been doubts about the loyalty of German-Americans, especially in the myriad pockets of the Midwest where they were particularly dominant. Many had hoped to stave off assimilation by clinging to their language and dual loyalties â but that commitment to their culture suddenly became a vulnerability.

In what is a largely forgotten chapter of American history, during the roughly 18 months of American involvement in the war, people with German roots were falsely accused of being spies or saboteurs; hundreds were interned or convicted of sedition on trumped-up charges, or for offenses as trivial as making critical comments about the war. More than 30 were killed by vigilantes and anti-German mobs; hundreds of others were beaten or tarred and feathered.

Even the German music of Beethoven and Brahms, which had been assumed to be immune to the hysteria, came under attack. …

Not surprisingly, those who could hid their Germanic roots; some switched their names; many others canceled their subscriptions to German newspapers, which virtually disappeared. Whatever vestige of German America remained after the 1910s was wiped out by similar pressures during World War II, not to mention the shame that came with German identity after it.

Erik Kirschbaum is the author of âBurning Beethoven: The Eradication of German Culture in the United States During World War I.â

After the stock market crashed in 1929 and artists and writers subsequently moved to the Left, history got retconned to imply that it was always that way. Typically, however, cultural intellectuals tended to be on the right, especially in the 1920s, and/or the animating disputes of the time don’t map well to 1930s Left-Right typologies.

The big cultural struggle in the 1920s was bohemians versus small town Protestant ministers / Protestant women. The wits of the era saw Prohibition and Feminism as a two-headed monster. The New Yorker magazine was founded in 1925 to be “not edited for the old lady in Dubuque.” Wilfrid Sheed wrote of the early New Yorker,

Thurberâs world cannot remotely be understood without understanding Prohibition, or the locker-room version of it: a plot brewed up by women and Protestant ministers while our soldiers were overseas, in order to end Americaâs men-only culture and bring the boys all the way home, not just as far as the nearest saloon.

The crushing of German-American pride in 1917 made possible both Prohibition and Suffragism, since the big German-American brewers were the main funders of the resistance to letting women vote, since everybody assumed that votes for women meant Prohibition.

Much of 1920s culture was a reaction to the triumph of Progressive WASPism during the second Wilson Administration.

Although German-Americans made up a high proportion of small town (and big city) Americans in the 1920s, German culture was seen in the 1920s by bohemians as less puritanical and fanatical than American Protestantism. Germans seemed to have worked out a healthy, reasonable relationship with alcohol, while British-Americans tended to swing between alcoholism and Prohibitionism.

Moreover, German-Americans could be Protestant, Catholic, or Jewish, or some combination (which appealed to people tired of sectarianism.

And German-Americans, who were well-educated on average, often had more connection to the glamorous artistic (e.g., Wagner) and intellectual currents (e.g., Nietzsche) of Europe.

For example, many of the culture wars of the 1920s in America were fought over the influence of Friedrich Nietzsche (the subject of Mencken’s first book), especially the Leopold and Loeb trial of 1924 and the Scopes Monkey Trial of 1925, which Mencken used to permanently tar the reputation of the left-of-center champion of small town values, William Jennings Bryan.

The superstar defense attorney in both media circuses was Clarence Darrow. He first pulled off the amazing feat of saving Leopold and Loeb’s necks by constructing a Nietzschean defense by blaming their heinous murder of a boy on Nietzsche: Leopold had no free will because he was under the influence of Nietzsche’s philosophy.

The Nietzsche connection helped lure Bryan into being guest prosecutor in the ACLU’s set-piece Scopes Monkey Trial. Bryan, a pacifist, had resigned as Wilson’s Secretary of State in 1915 on the (correct) grounds that Wilson’s policies would eventually entangle America into war with Germany. But Bryan was a genuine pacifist and was horrified by Imperial Germany issuing extracts from Nietzsche’s works to its soldiers on the front to motivate them. In the wake of Darrow’s vastly publicized triumph in the Leopold and Loeb trial, Bryan saw the Monkey Trial as a chance to take a stand again Nietzscheanism. The Russian Empire: Too Nice for Its Own Good
Anatoly Karlin
• 359 Comments
← BBC: "EU Should 'Undermine National Hom...NYT: Scott Walker Should Have Spent Mor... →
Hide 207 CommentsLeave a Comment
""Whatever Happened to German America?""
• 207 Comments
Commenters to Ignore
Commenters to ignore (one per line)