Why canât J.K. Rowling accept transgender people like me?

By Charlotte Clymer
Charlotte Clymer, a transgender woman and U.S. Army veteran, is a press secretary at the Human Rights Campaign. She lives in Washington, D.C.
Dec. 21, 2019 at 10:12 a.m. PST

In the magical world of Harry Potter, the justice-minded and rebellious adolescent characters drink something called âPolyjuice Potionâ to temporarily take on the general appearance of other people, even those of entirely different anatomies and gender expressions. As a teenager, I remember reading this and thinking, âOh God, I wish it were that easy.â

At the time, I was very much in the closet as a transgender girl with scarcely any vocabulary â not even the now familiar medicalizing term âgender dysphoriaâ â to explain to the adults in my life how I was in pain, and the world J.K. Rowling created offered escape.

It wasnât the genre elements that appealed to me but the central message of courage in the face of evil and authenticity in the midst of urged conformity. Woven throughout the narrative is an insistence on love and community and integrity and inclusion, which is why it has broken my heart in recent years to see Rowlingâs inexplicable replacement of justice-minded imagination with a bigotry-driven rejection of science and reality.

… In her tweet, Rowling effectively dismissed all of this, suggesting that Forstater was being fired for âstating that sex is real,â a common transphobic assertion that has been dismissed by medical experts and other scientists. …

Like many other trans folks, I had caught glimpses of much of this, but Burnsâs precise summarization was a punch to the gut. …

Waking up Thursday morning to Rowlingâs unequivocal defense of Forstater was searing. I felt foolish and betrayed. I felt guilty for not affirming my siblings in the trans and non-binary community who had the courage to speak out against her history with conviction. I thought of the numerous conversations I had navigated with other trans and non-binary people on Rowlingâs history, nodding in agreement that, yes, she had been extremely problematic and hurtful and certainly engaged in casual transphobia, but I demurred at suggestions she was consciously bigoted. …

After Rowling turned down an offer from the LGBTQ media organization GLAAD to have an off-the-record conversation with trans people that could potentially close this gap in understanding, I was left realizing that transgender people embody the magical world of Harry Potter better than almost anyone. If the root of Rowlingâs books is the constant miracle of overcoming considerable odds with love and courage to negotiate hatred, trans people, who leave our homes every day into a world full of discrimination and violence against our bodies and souls, are the closest thing this world has to magic.

Here’s Miss Magic transplaining to a girl that the saying “sex is real” is a common transphobic assertion that has been dismissed by medical experts and other scientists: 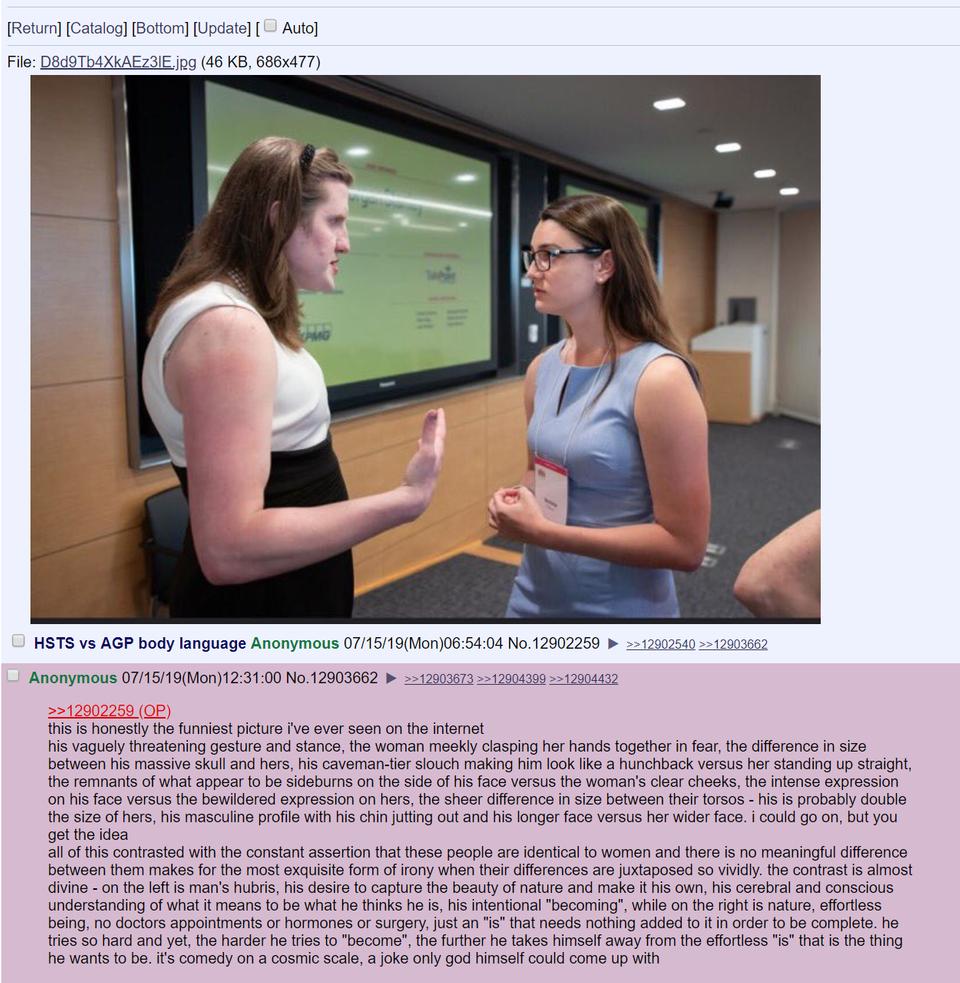 Recently from Author
← The Junior Anti-Sex League's Prepubesce...The Christmas Spirit →
Hide 148 CommentsLeave a Comment
"Washington Post: Ex-Men, Such as (To Pick a Random Example) ME, Are Magic"
• 148 Comments
Commenters to Ignore
Commenters to ignore (one per line)

Save ListCancel
Endorsed Only
Trim Comments?
• Replies: @orionyx
@HailIt occurs to me that 'ex-men' is in its own way as unsatisfactory a phrase as 'trans-women'.

There is a perfectly good English word for a man who has had his genitals shaved to the bone. That word is 'eunuch', which I propose we bring back into use. For those who only dress as women, we can use 'faux eunuch', or perhaps 'eunuch-inn-waiting'.
This saves us from making one of two mistakes: that these are ex-men, for mutilated though they be, they are still men; and that these are any kind of woman, for no woman is a man.
For the women who try to be men, we can reserve the phrase 'cross dressers', perhaps prefacing it with 'mutilated' if they have enjoyed the benefits of surgery.
• Replies: @Dave3
@ic1000When a horny dude picks up a hooker and discovers that she has a penis, or a supperating wound between her legs, he's likely to react violently. Especially if he discovers this *after* fucking her.

If they were alive, some of these trannies could be charged with "rape by deception" for tricking straight men into performing homosexual acts.Replies: @Jim Don Bob, @Dissident
← The Junior Anti-Sex League's Prepubesce...The Christmas Spirit →