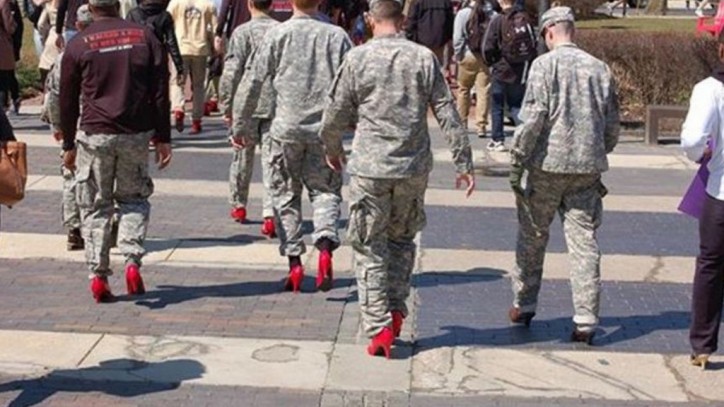 From the Arizona State college newspaper:

ASU’s Reserve Officers Training Corps (ROTC) hosted a “Walk A Mile in Her Shoes” event Monday to raise awareness against sexual violence and abuse in the community and the military. ROTC members sported heels and walked throughout the Tempe campus to draw attention to the cause.

Blisters, sweat and perhaps a little bit of blood was the sight at the Sun Devil Fitness Complex on Monday, when the men and women of ASU Army ROTC braved the Arizona heat to run in fabulous (and some not-so-fabulous) heels to raise awareness of sexual assault.

On Monday afternoon, ASU Army ROTC program hosted the event, “Walk a Mile in Her Shoes,” which consisted of students in the ROTC program wearing heels and running 1.26 miles as part of Sexual Assault Awareness Month.

History senior and ROTC member Tanner Bailey said despite the pain he felt running in heels, it was a great experience because he enjoyed running for an issue that was not just important for the military.

â(Sexual assault) is something that the Army has made very important recently,â Bailey said. âI didnât mind running in shoes because of the message behind the event. I would definitely do it again.â

… When ASU Army ROTC decided to hold an event for Sexual Assault Awareness Month, it realized walking a mile in high heels would bring school-wide attention to such an important issue, ROTC Cdt./Corporal Alexis Johnson said.

âThe purpose of the event is to create a basis of understanding about sexual violence, stigmas and rape culture in the military as well as in our community and to reinforce standards of behavior, active bystander mentality and to be peer advisers to one’s unit and community,â Johnson said. âBy walking in heels, the hope is to instill standards of behavior that will resonate.â

Johnson said they chose this event because the powerful message of the heels would be best at capturing the communityâs attention.

âThe heels represent the rise of sexual assault within our community,” she said. “Though the heels may feel one-sided, only acknowledging that females suffer the horrors of rape and sexual assault, that is not the case. The event is a synopses of the problem that both men and women suffer in our community and society through the stigmas, rape culture and lack of respect and education.â

âGood grief. How many of the military leaders of the world may simply be deranged old sodomites acting out some fake fantasy role? Actually this might be quite beneficial to the world. It could mean an end to war forever. This could be the key to lasting peace. â¦ The power-crazed leaders of the world would certainly be surprised to find that their military leaders and troops were masquerading sodomites who were only too eager to meet the masquerading sodomite armies of the other nations to have dances and balls and learn some foreign dance steps. â¦

Almost everyone else has had an opportunity to run the world. I cannot see why these people should not be given a chance. â¦

Their movement into power will be, in a sense, only a part of the global movement for opportunity, justice, and equality for all. (For example, can you name one good, practicing transvestite in the Senate? No! These people have been without representation long enough. Their plight is a national, a global disgrace.)

Save ListCancel
Endorsed Only
Trim Comments?
← "Lessons from #RaceTogether"True Shame →