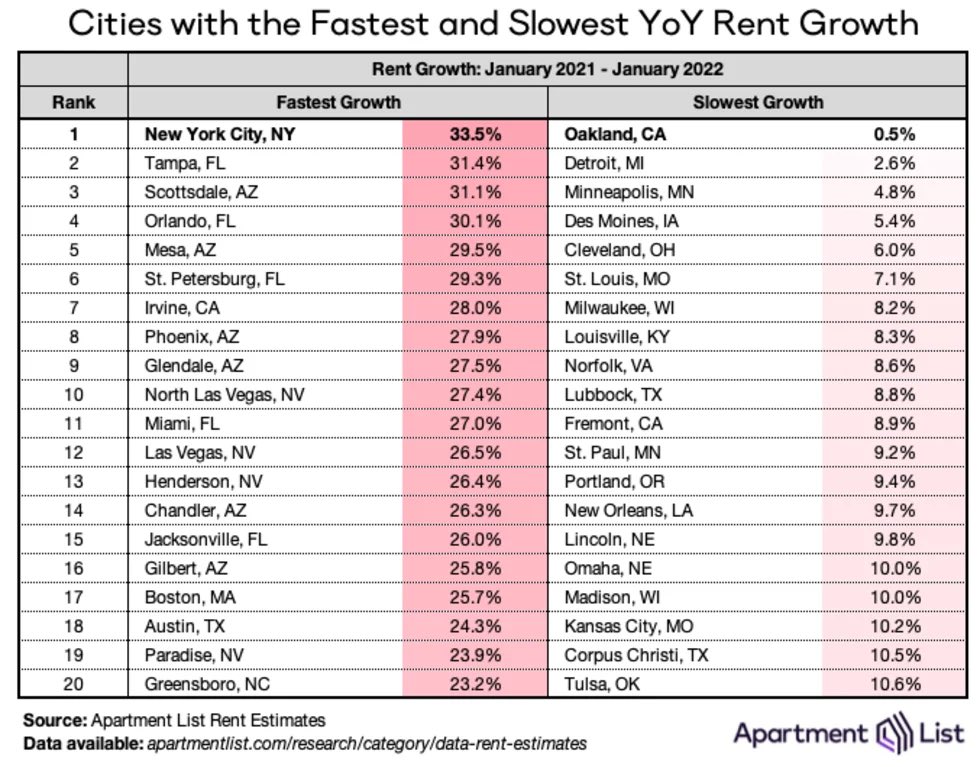 This is from Apartment List’s National Rent Report. Rent went up a record 18% in 2021, although I doubt if landlords are doing all that well due to eviction freezes.

On the rising rents side, New York City went up so much to make up for the sharp fall in rents in 2020 following NYC’s horrific March 2020 death wave:

What differentiates New York City from most other cities at the top of this list is that the rapid growth of the past year has mostly served to offset a sharp decline in rents during the first year of the pandemic. Even after the astronomical growth of the past 12 months, rents in NYC are now just 4.4 percent higher than they were in March 2020. In contrast, Tampa never experienced a meaningful decline in rents at the start of the pandemic, and rents there are now 34.3 percent higher than they were in March 2020.

Most of the other places with rapidly rising rents are fairly suburban and/or mooted alternatives to Silicon Valley, such as Austin, Miami, and Boston. People appear to be moving toward lower murder rates, although that’s a general pattern over the last 50+ years, which is why, say, East St. Louis got so unpopular that nobody lives there anymore.

The places where rents are going up the slowest tend to be heavily black and have already high or rising murder rates. For example, Minneapolis and Portland used to be pretty safe places, but local politicians tolerated so much anarchy there during 2020 that 2021 murders in both were at least twice 2019 murders.

Murder rates went up all over the country during the racial reckoning, but a 30% increase in an already murder prone heavily black city like St. Louis or Detroit is worse in an absolute sense of incremental dead bodies than a similar increase in Boston or Austin.

One conspiracy theory is that the Real Estate Interests carefully plotted the 2020 racial reckoning riots in order to launch some unspecified Underwear Gnomes business plan:

Obviously, if I understood genius business strategies, I’d be rich, but I’m not so I don’t. But still, making rents in Oakland, with its history of black radicalism and high crime rates, 17.5% lower relative to the country as a whole over the course of 2021 sounds like a pretty expensive Step 2.

American Pravda: Jews and Nazis
The Hidden History of the 1930s and 1940s
Ron Unz
• 579 Comments • Reply
Tweets by steve_sailer