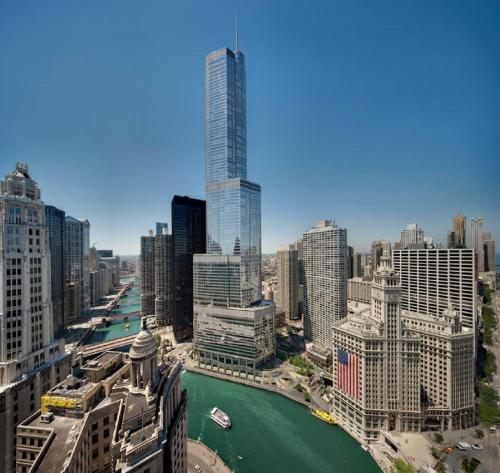 But a problem with this line of assault is that the landscape is full of giant buildings with Trump’s name on them, such as the 98-story Trump International Hotel and Tower on a great site on the Chicago River, which the Trump Organization managed to open in the teeth of the financial crisis in 2009. (The Chicago project was a storyline on Trump’s reality show The Apprentice.)

Voters tend to be impressed by the construction of tangible things, especially huge ones patronized by famously rich and demanding celebrities. We’ve all managed, at minimum, home improvement projects and recognize that they require a lot of work and a lot of decision-making. Looking at this enormous luxury hotel / apartment building, it’s pretty obvious that a lot of sweating the details went into it.

A big part of Mitt Romney’s problems in 2012 was that his business career, while no doubt energetic and cognitively demanding, mostly involved intangible financial abstractions and what PR people like to call creative destruction (i.e., laying workers off). He had something to do with Staples, but other than that, the Romney people could never seem to offer much inspiring detail on what he’d been up to.

Romney, himself, seemed unsatisfied by his business career. It was often pointed out that other individuals with his opportunities would have made billions in private equity, but Romney was content with an order of magnitude less money and soon turned to public service projects like the Salt Lake City Winter Olympics.

Recently from Author
← Why Bernie's Free Stuff Platform Won't ...Blacks Hate Bernie →
Hide 91 CommentsLeave a Comment
"Trump and the Tangible"
• 91 Comments
Commenters to Ignore
Commenters to ignore (one per line)