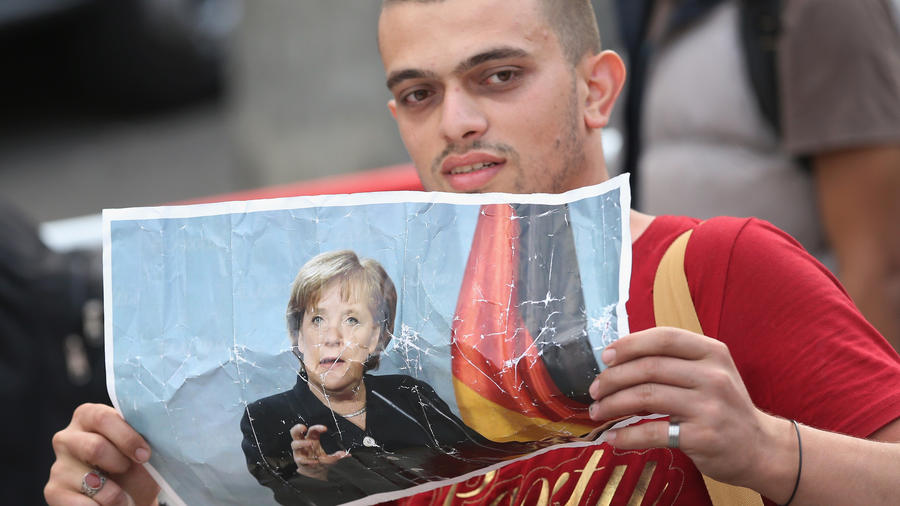 A migrant from Syria holds a picture of German Chancellor Angela Merkel as he arrives from Hungary at Munich’s main railway station on Sept. 5. Germany has agreed to set aside more than $6 billion next year to help migrants. (Sean Gallup / Getty Images)

Just two months ago, Germany was suffering from yet another image problem, deplored as a harsh and heartless overlord in its effort to impose financial discipline on its European neighbors.

Its hard-nosed bailout negotiations with debt-ridden Greece and apparent willingness to throw Athens under the bankruptcy bus triggered protests around the world and caricatures of Chancellor Angela Merkel as Adolf Hitler.

Now Merkel is being hailed as an angel of mercy and her country as a paragon of virtue for flinging open the doors to a massive influx of refugees. The sight of Germans whooping in welcome and thrusting gifts at bedraggled asylum seekers arriving on chartered trains has stood in sharp contrast to the indifference or outright hostility directed at them in other European nations.

Some Germans hope that such positive images might help remove some of the stains on their reputation, including older, darker associations with trains full of unwanted people â those who were systematically sent to their deaths by the Nazis. Merkel said she was moved by the sight of hundreds of migrants stuck at a railway station in Hungary last week, chanting their desire to come to Germany.

âThis wasnât always the case,â she said with characteristic understatement. …

But such incidents have been drowned out in recent days by the numerous accounts and images of ordinary Germans turning out in droves to help the newcomers in their midst.

In Munich, such efforts shifted into high gear at a donation bank, where half a dozen people sorted through heaps of clothing, toys, bicycles and bedding earmarked for refugees. The welcoming attitude was particularly noteworthy in a city that has long had to live with the stigma of being the birthplace of the Nazi Party.

This is the third night in a row I’ve clicked on an MSM article and Merkel Youth’s face pops up, all in different shots: