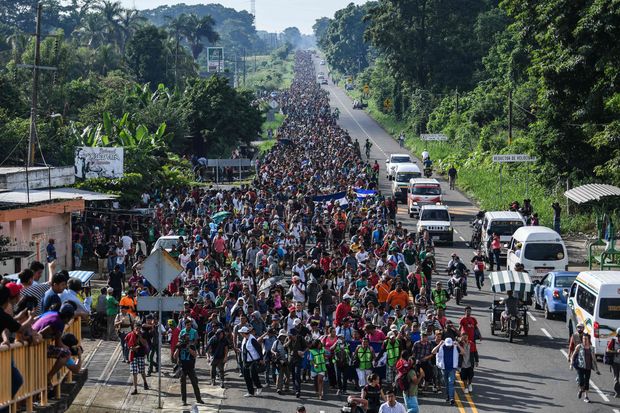 The March Against White Supremacy has reached southern Mexico.

Is the Rightâs âCaravanâ Panic a Reenactment of Its Favorite Racist Novel?
By Ed Kilgore

… Partisan politics aside, this whole meme involving a possible military response to refugees besieging the United States reminded me of something â¦ and it finally hit me: It was pretty close to the central premise of The Camp of the Saints, Jean Raspailâs racist French novel of the 1970s that nativists have recently revived as offering a literary warning that the Westâs self-destructive liberalism is betraying white people into the hands of their Third World enemies. …

But at some point, we have to take people seriously when they treat migrants as an existential threat to civilization, and the use of force against them as a sad but necessary measure of self-defense.

In other words, the elected government of the United States of America has no moral right to defend our borders.

In contrast, one of the few surviving sane white male Democrats, Thomas Edsall of the NYT, tweets:

Is Adelson paying the marchers? https://t.co/rrli1WPPnf

Obviously, these kind of pictures aren’t good for the Democrats.

On the other other hand, Paul Krugman is outraged that GOP donor Sheldon Adelson doesn’t understand what is good for the Jews:

And people like Sheldon Adelson aren't just gross and evil; they're also fools. If the people he backs consolidate power, all his wealth and bribery won't save him from the anti-Semitic wave they'll unleash. 4/

By the way, let me offer a couple of observations:

The existence of the simple term “Caravan” to describe what’s going on has a major Sapir-Whorf impact on how easy it is to think and talk about this. In contrast, there’s never been an agreed upon term for the 2015 event I call Merkel’s Mistake, so a lot of people don’t seem to remember it well.

Second, there are strikingly few iconic photos of the size of Merkel’s Muslim Mob. Nigel Farage wisely seized upon one:

There was much huffing and puffing over how dare Farage use a photo. What could be more demagogic than photography?

In contrast, I’ve seen lots of photos like the one above taken from a high vantage point showing the Caravan walking down a slight valley on a straight road thus well-displaying its size.

Recently from Author
← WaPo: BBQ Beckys Aren't Funny, They Are...The Elections →
Hide 283 CommentsLeave a Comment
"The March Against White Supremacy"
• 283 Comments
Commenters to Ignore
Commenters to ignore (one per line)