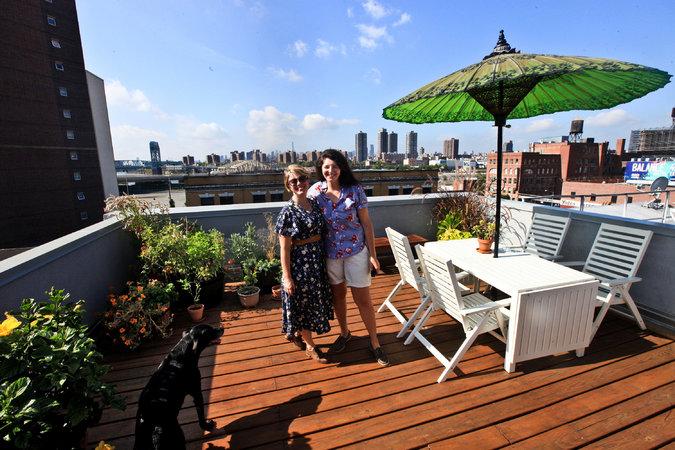 Anne Stewart, 43, left, and Katie Rubright, 34, on the roof deck of their two-bedroom apartment in the Mott Haven-Port Morris area. Credit Byron Smith for The New York Times

… The coupleâs story is becoming more common. In the never-ending quest for reasonable rents and tolerable commutes, New Yorkers are branching out in new directions. And the Bronx, it seems, is having a moment.

In the past, the Bronx was often dismissed by outsiders, largely because of a reputation rooted in urban decay. But both the borough and its reputation are changing. With prices in Manhattan, Brooklyn and parts of Queens now out of reach for many renters and buyers, the Bronx, particularly the South Bronx, has assumed the mantle of next frontier. In the last six months, listings for co-ops in the Grand Concourse Historic District have turned into bidding wars, with buyers from Brooklyn and Manhattan laying out all-cash offers.

âPeople are looking for the next hot spot, and the Bronx is this hub. Itâs very close to Manhattan,â …

But nearly 40 percent of residents in the South Bronx live below the poverty line, and community activists worry that the areaâs most vulnerable residents could be left behind in the rush to develop.

âWeâve watched what happened in other neighborhoods and seen how this has priced out existing residents,â said Mychal Johnson, a founder of South Bronx Unite, an advocacy group. âWe are trying to find ways to make sure that the residents who suffered through the really harsh times are able to stay.â

On the face of it, the cityâs northernmost borough, particularly its southern tier, is a natural alternative to Manhattan. The South Bronx offers a shorter commute to Midtown than many parts of Brooklyn and Queens, and has abundant housing, with an eclectic mix of Art Deco prewar buildings, historic rowhouses and single-family houses. But for decades, the lower part of the Bronx remained off the radar.

More than any other area in New York City, the South Bronx suffered the brunt of the white flight of the 1970s and 1980s. Even as the city and community groups made strides to reduce blight, the borough struggled to shed the unforgiving tagline from the late 1970s â âthe Bronx is burning.â

If you are wondering why the New York – Washington elites have been in such a frenzy lately to crush the slightest hints of local resistance to black or Latino takeovers of unfashionable suburbs and Flyover burghs, well, the current residents of the South Bronx have to have somewhere to go, don’t they? And the quicker they leave, the bigger the Return on Investment.

Recently from Author
← The Autumn of EuropeQ. Is Obama a Muslim? A. He Was Raised ... →
Hide 47 CommentsLeave a Comment
"The Latest Frontier for White Gentrifiers: the South Bronx"
• 47 Comments
Commenters to Ignore
Commenters to ignore (one per line)

Save ListCancel
Endorsed Only
Trim Comments?
← The Autumn of EuropeQ. Is Obama a Muslim? A. He Was Raised ... →