I’m perpetually in awe of and aghast at the various dreamers / adventurers / maniacs who during World War I conjured up vast plans to redraw the map of the world, from the semi-successful like Lawrence of Arabia to the farcical like Zimmerman of Mexico. One of the more colorful was the Imperial German diplomat-archaeologist Max Von Oppenheim, who tirelessly funded jihads among many Islamic populations ruled by the British Empire.

One lesson is that while it can be intellectually appealing to assume that the course of 20th Century grand strategy inevitably reflected deeply rooted realities, it’s also worth reminding ourselves of how many intelligent men envisioned different and fairly plausible outcomes during the mad scramble of events.

From the Dublin Review of Books: 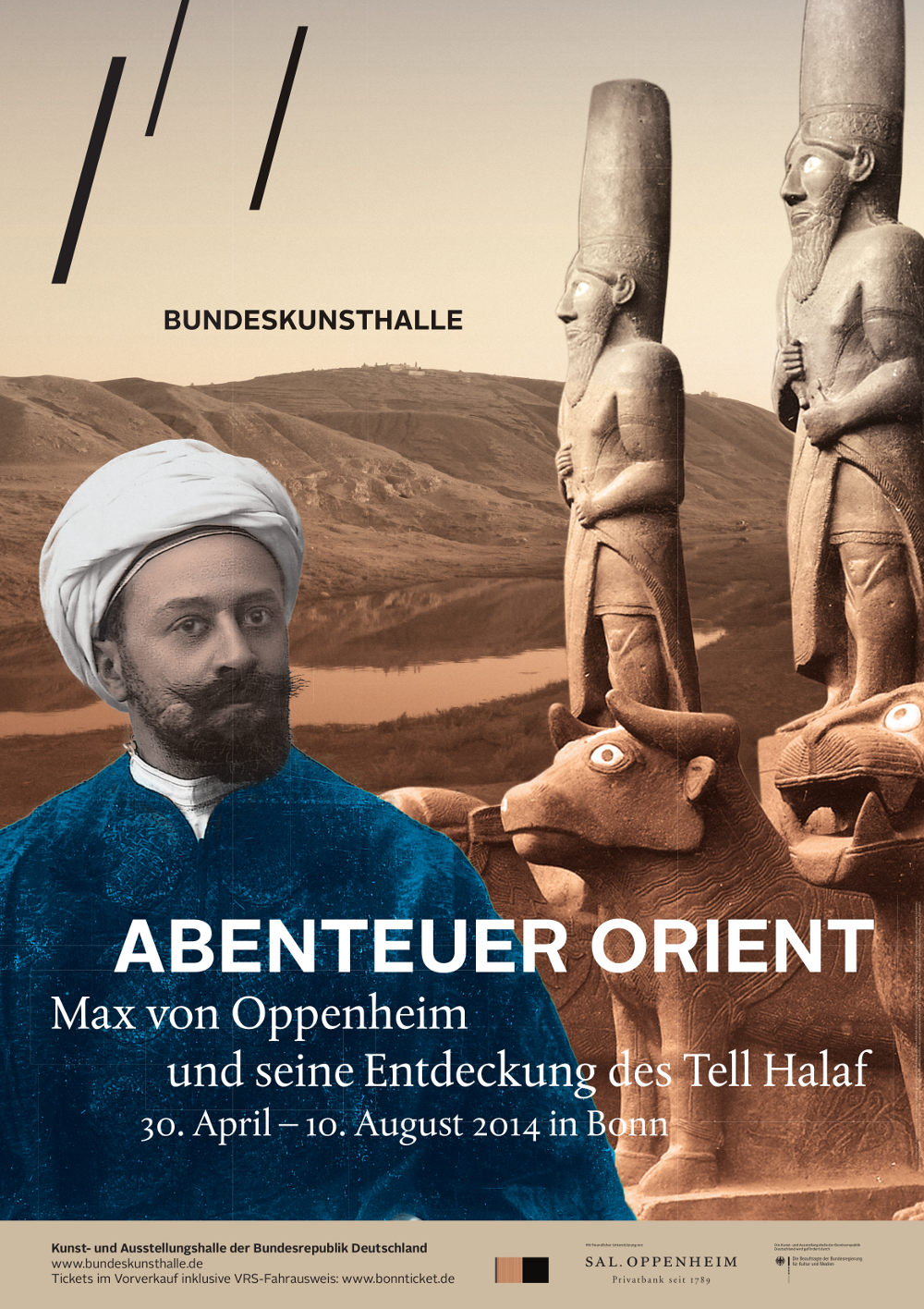 … It is not unusual for the enthusiasms of the powerful to attract devoted acolytes to the cause, and the Kaiserâs interest in the Muslim card had no more fervent and colourful ministrant than Baron Max Von Oppenheim.

Sprung from a wealthy Jewish dynasty still prominent in German banking, his father had married a Catholic and converted to that faith. Von Oppenheim first met the Kaiser through their common membership of the elite Uhlan Guards regiment. The young baron found the allure of the Orient wonderfully incarnated in its seductive womenfolk, and began a lifelong engagement with the Islamic world which led him to learn Arabic, as well as taking full advantage of the Islamic amenity of temporary marriage. He also developed an interest in archaeology, the cover of choice of so many spies and adventurers in the Middle East. In his case it led to the discovery and excavation of significant neolithic remains at Tell Halaf in Northern Syria. …

Oppenheim managed to join the German foreign ministry, but only on a semi-detached basis, either because of his Jewish antecedents, or perhaps because of official mistrust of his free-wheeling ways. Nevertheless his dispatches reached the kaiserâs desk, and his artful massaging of Wilhelmâs predilections resulted in an appointment to Cairo, where he combined the roles of pasha and German diplomat, the latterâs salon carefully separated from the formerâs harem.

I have this unusual suspicion that the fundamental impulse behind Palestinian-American scholar Edward Said’s immensely influential 1978 book Orientalism was “Don’t You Come Around Here No More:” a normal, healthy, masculine, slightly redneck aversion to European sex tourists in the Near East, both the straights like Von Oppenheim and, to judge by the grotesque cover picture of his book, especially the boy-botherers like Lawrence.

True to his belief, as expressed in one of the dispatches he rained down on the Wilhelmstrasse that âthe striking power and demographic strength of Islamic lands will one day have a great significance for European statesâ, …

On the day Germanyâs secret treaty with Turkey was signed, Baron Oppenheim was summoned to the Wilhelmstrasse and returned to the semi-formal embrace of the foreign office as the impresario of jihad. The German setback at the Marne enhanced the appeal of a German-Turkish attack on the Suez Canal, and a significant sum was earmarked for this project. Now Oppenheim turned his energies to planning how fuses might best be lit to detonate the Muslim populations in British, French and Russian territories. Some dozen rather motley German jihadists set out on his orders to the targeted territories to fan the flames of the holy work. All that was needed to set things alight, the baron promised, was the fatwa of the Sultan-Caliph.

Assiduous efforts in the end produced no less than five fatwas, satisfactorily ranking jihad against Germanyâs enemies as the highest personal duty for all Muslims (as opposed to lesser obligations which a believer might, without reproach, leave to execution by others). Oppenheimâs pro-jihad pamphlets, cascading off the presses in all relevant languages, are astonishingly uninhibited in their invocation of the most sanguinary texts of the Koran on the killing of infidels. He even added to this bloodthirsty theology the modern refinement of a production quota, suggesting âeach believer takes on him an oath to kill at least three or four of the ruling infidels, enemies of God and enemies of religionâ. His recklessness was all the more reprehensible in that his extensive personal experience of the Islamic world must surely have given him a good notion of how inflammable the situation was to which he applied his talents. …

This triumph for the German-Turkish alliance [Gallipoli] gave Oppenheim a fresh surge of jihadist energy. He was in Constantinople in 1915 seeking to persuade Feisal, the son of the sherif of Mecca, to accept the Turkish caliphate and support its jihad. Feisal, known to English-speaking readers from TE Lawrenceâs admiring account, had been deputed by his father to mollify the Turks and monitor their intentions, which he suspected might be to depose him as sherif in favour of a tribal rival. Oppenheim brokered extended discussions between Feisal and the Turks, with Feisal deferring to the inscrutable will of God whenever pressed for future commitment, but abounding otherwise with enthusiasm for jihad.

Oppenheim was fully aware of the cleavage between Shia and Sunni Muslims, and that a separate fatwa process was needed for the Shia.

… Oppenheim was busy in promoting an invasion of Egypt from the west by the Sanussi brotherhood in Libya. In spite of their glamorous association with the mahdi, who had laid General Gordon low some decades earlier, the attack by the brotherhood came to nothing in the now familiar welter of wasted bribes and broken promises. …

It is a striking irony of German policy that the strategy of infecting the enemy with an ideological virus failed abjectly with regard to Islam but succeeded beyond Berlinâs wildest dreams in its secularist version. The sealed train carrying Lenin to the Finland Station undermined the sickly tsarist regime and meant that Russia, the sledgehammer of the Second World War, ceased to threaten the Reich.

… [McMeekin] recognises rightly the shallowness of the thinking behind the Balfour Declaration, and of equivalent policy impulses on the German side â a lofty and indifferent condescension to Arab and Jewish aspirations alike is probably the best psychological key to these policies. That Germany, in different circumstances, might have become a champion of Zionism rather than of anti-Semitism is a plausible, if counterfactual conjecture.

My impression is that the German Foreign Office’s reaction to the Balfour Declaration in 1917 was roughly:

German Foreign Office: What a great idea! Why didn’t we think of it? Let’s issue our own Balfour Declaration giving the Zionists at least as much land.

Ottoman Foreign Office: Hey, wait a minute! We’re your ally. We own Palestine. You can’t promise to give away your ally’s territory.

In general, Jewish opinion during the Great War tended to be pro Kaiser, since he was battling the backward anti-Semitic Czar.

The author is on more questionable ground in implying that Oppenheimâs bloodthirsty pamphlets had a significant influence on subsequent Arab attitudes. They were written to exploit and harness a pre-existing Islamic theology, and the notion of their enduring importance is at variance with McMeekinâs own caustic demonstration of their ineffectual role in the war itself. That the odious baron should recycle his jihadist notions for Hitlerâs benefit is not as surprising as McMeekin seems to find it,…

I presume that one long-term effect of Von Oppenheim’s jihadist machinations was to remind Muslims that the ferengi were not, as they might appear at first glance, a united civilization that would work together intelligently to maintain European supremacy. Instead, the colonizers were deeply riven by national and/or imperial rivalries back in Europe, which would eventually undermine and exhaust Europe’s imperial ascendancy over the rest of the world, which had only been made possible by the Continent’s long peace over 1815-1914.

In 1913 European prestige was formidable in much of the imperialized world.

Europe seemed to be ruled largely by an interlock web of royal relations, such as the Kaiser’s first cousins the King of England and the Czar of Russia (who was married to the King’s cousin).

But in 1914-1918 there suddenly appeared brilliant envoys like Von Oppenheim telling Muslims that the Kaiser of Germany would bet immense amounts of gold that they would be able to drive out the King of England, or Lawrence telling Arabs that not even the Kaiser’s backing for the Ottomans could stop them from achieving their independence, which would be funded by the King of England’s gold.

In the movie Lawrence of Arabia, Lawrence writes Auda a promissory note payable in gold by the King of England. But Von Oppenheim really was an old soldiering buddy of the Kaiser.

As a historian, McMeekin sheds a new light on many hitherto forgotten dimensions of the First World War. The eccentric enterprise of the German jihad produced a correspondingly eccentric cast of characters, from the Ã¼berFlashman Oppenheim downwards. …

The kaiser was a pioneer in the notion of using Turkey as a bridge between Europe and the Islamic world. The events chronicled in this book are not particularly encouraging, being more consistent with Dr Ian Paisleyâs insight that the trouble with a bridge was that it went over to the other side. …

Sean OHuiginn retired from the Irish diplomatic service in 2009. His most recent foreign postings included service as Ireland’s Ambassador to Washington, Berlin and Rome.

Recently from Author
← The Future of Social MediaRule by Actresses Is Going to be Lit →
Hide 145 CommentsLeave a Comment
"Baron Max von Oppenheim: the Kaiser's Jewish Catholic Jihadist"
• 145 Comments
Commenters to Ignore
Commenters to ignore (one per line)

Save ListCancel
Endorsed Only
Trim Comments?
← The Future of Social MediaRule by Actresses Is Going to be Lit →