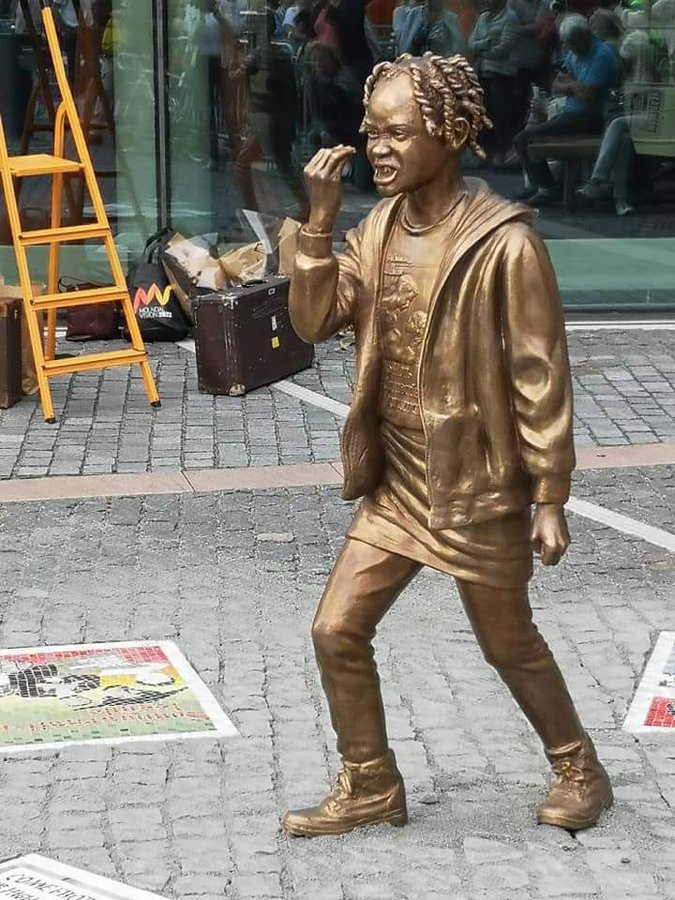 It has seldom been remarked upon that the number of bronze statues is currently proliferating, going back, perhaps, to the statue of hockey player Bobby Orr erected outside of Boston Garden about three decades ago. Here’s a new one, apparently in MÃ¶lndal, Sweden. The picture below is courtesy of the MÃ¶lndals-Posten newspaper. I’m not sure who, exactly, is being depicted, but lots of Intersectional Pokemon Points.

The handsy Arab on the left reminds me of a good name for Jordan Peele’s next horror movie: Don’t Touch The Hair!

I particularly like the local oldster with the cane attempting to flee from this objet d’art newly plopped in his town square, but clearly in slow motion, as in a nightmare. There should be a statue of him called “White Flight: You Can Run, But You Cannot Hide.” Update: This work appears to be by sculptor Bjorn Carnemalm of Malmo, a tall, self-confident-looking artist. Why the African girl is depicted making an Italian hand gesture remains a Swedish mystery.

In completely unrelated news, from the New York Times:

Sweden Was Long Seen as a âMoral Superpower.â That May Be Changing.

STOCKHOLM â In a civic center in Rinkeby, a heavily immigrant district of northwest Stockholm, several hundred people gathered recently for a forum on Swedenâs coming election and the future of the country.

The conversation, about the nature of Swedenâs democracy and the importance of voting, was sophisticated and passionate. But it was frustrating for one participant, Ahmed Ali, a Somali immigrant, who thought people were dancing around the main issue.

âThe stakes are really high in this election,â he said in an interview. âThere are more extremists in the country, and they have more influence. They donât have a real political agenda. They just hate immigrants. And this xenophobia is happening all over Europe.â

As an angry and divided Sweden prepares to vote on Sunday, the shape of the next Swedish government is utterly unclear, because of the rapid rise of the anti-immigration, anti-Europe Sweden Democrats, a populist nationalist party that is expected to win a fifth of the vote.

Why won’t those angry, extremist Swedes listen to the wise advice of Somalis about for whom they should vote? After all, Somalis, unlike Swedes, are known worldwide for their political genius at forging workable political compromises. The only sensible solution is to bring in more Somalis until Swedes can no longer tip Swedish elections. We call that Democracy.

Recently from Author
← Whom to Leave Behind?USA's John McCain Memorial Pointless Wa... →
Hide 144 CommentsLeave a Comment
"The Bronze Age of Bronze Statues"
• 144 Comments
Commenters to Ignore
Commenters to ignore (one per line)