The Astonishing Greatness of Serena Williams

That reminds me of an op-ed by Professor Stephen Jay Gould that the great man published in the Wall Street Journal on September 10, 1998 towards the end of that famous baseball season:

How the New Sultan Of Swat Measures Up

… As a veteran and close student of the 1961 Mantle-Maris derby, I thrill to the detailed similarity of McGwire vs. Sosa. The two Yankees of 1961 embodied different primal myths about great accomplishments: Mantle the deserving hero, working all his life towards his year of destiny; Maris the talented journeyman, enjoying that one sweet interval in each man’s life when everything comes together in some oddly miraculous way. (Maris never hit more than 39 home runs in any other season.) That year, the miracle man won–and shame on his detractors. Fluke or destiny doesn’t matter; Roger Maris did the deed.

Sammy Sosa is this year’s Maris, rising from who-knows-where to challenge the man of destiny. Mark McGwire is this year’s Mantle. Few other players have been so destined, and no one has ever worked harder and more single-mindedly, to harness and fulfill his gifts of brawn. He is the real item, and this is his year. No one, not even Ruth, ever hit more than 50 homers in three successive seasons as McGwire has now done. (But will anyone ever exceed Ruth’s feat of hitting more than 40 home runs in all but two years between 1920 and 1932?)

Though we cheer both Sosa and McGwire–may they each hit at least 70–we nonetheless rightly focus on McGwire for the eerie and awesome quality of his particular excellence. …

McGwire belongs to this most select company of superhuman achievers. He may well hit 70, thus creating the same sweep of empty space that separates DiMaggio and Thorpe from their closest competitors. Moreover, the character of his blasts almost defies belief. Four hundred feet is a long home run; the vast majority of Major League dingers fall between 300 and 400. Well, only 19 of McGwire’s first 62 failed to reach 400 feet (including number 62, which was a mere 341 feet), and several have exceeded 500, a figure previously achieved only once every few years.

When faced with such an exceptional accomplishment, we long to discover particular reasons. But no special cause need be sought beyond the good fortune of many effectively random moments grafted upon the guaranteed achievements of the greatest home-run hitter in the history of baseball.

I don’t care if the thin air of Colorado encourages home runs. I don’t care if expansion has diluted pitching. I don’t care if the ball is livelier and the strike zone smaller. And I especially don’t care if McGwire helps himself train by taking an over-the-counter substance regarded as legal by Major League Baseball. (What cruel nonsense to hold McGwire in any way accountable, simply because we fear that kids may ape him as a role model for an issue entirely outside his call, and within the province of baseball’s rulemakers.)

Mark McGwire has prevailed by creating, in his own person, the ultimate combination of the two great natural forces of luck and effort: the gift of an extraordinary body, with the a steadfast dedication to training and study that can only merit the literal meaning of a wonderful word, enthusiasm, the intake of God.

Right after Stephen Jay Gould and Sports Illustrated and everybody went nuts about how Sosa and McGwire had returned the innocence to the game, etcetera etcetera, I watched a lot of pro wrestling in Stone Cold Steve Austin vs. The Rock era. It was even more entertaining, and I didn’t have to pretend and get mad like Dr. Gould did at skeptics.

WIMBLEDON, England â While most celebrities go incognito behind a hat and sunglasses, Serena Williams uses a different tactic to blend into a crowd: long sleeves.

During an appearance on Home Shopping Network for her clothing line, Williams said that one particular long-sleeved garment would help her go unnoticed in public.

âMy arms are really fit, but I wanted to cover them, because when I do people donât recognize me as much,â she said.

Williams, who will be vying for the Wimbledon title against GarbiÃ±e Muguruza on Saturday, has large biceps and a mold-breaking muscular frame, which packs the power and athleticism that have dominated womenâs tennis for years. Her rivals could try to emulate her physique, but most of them choose not to.

Well, I don’t think many of her European rivals could even try to emulate the lower half of Serena’s physique if they wanted to. But the reporter is getting across, wrapped in concern trolling for European women tennis stars as victims of cultural prejudice against Strong Women the insinuation that Serena is doing something to look like that …

Despite Williamsâs success â a victory Saturday would give her 21 Grand Slam singles titles and her fourth in a row â body-image issues among female tennis players persist, compelling many players to avoid bulking up.

Radwanska, who struggled this year before a run to the Wimbledon semifinals, said that any gain in muscle could hurt her trademark speed and finesse, but she also acknowledged that how she looked mattered to her.

âOf course I care about that as well, because Iâm a girl,â Radwanska said. âBut I also have the genes where I donât know what I have to do to get bigger, because itâs just not going anywhere.â

For many, perceived ideal feminine body type can seem at odds with the best physique for tennis success. Andrea Petkovic, a German ranked 14th, said she particularly loathed seeing pictures of herself hitting two-handed backhands, when her arm muscles appear the most bulging.

âI just feel unfeminine,â she said. âI donât know â itâs probably that Iâm self-conscious about what people might say. Itâs stupid, but itâs insecurities that every woman has, I think. I definitely have them and Iâm not ashamed to admit it. I would love to be a confident player that is proud of her body. Women, when we grow up weâve been judged more, our physicality is judged more, and it makes us self-conscious.â

Petkovic said that people who meet her in person often remark that she is smaller than she looks in photographs and on television. 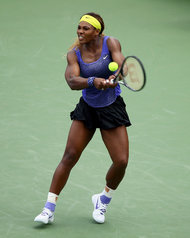 âPeople say, âOh, youâre so skinny, I always thought you were huge,â â she said. âAnd then I feel like there are 80 million people in Germany who think Iâm a bodybuilder. Then, when they see me in person, they think Iâm O.K.â

Williams, 33, who has appeared on the cover of Vogue, is regarded as symbol of beauty by many women. But she has also been gawked at and mocked throughout her career, and she said growing confident and secure in her build was a long process.

âI donât touch a weight, because Iâm already super fit and super cut, and if I even look at weights, I get bigger,â she said. âFor years Iâve only done Thera-Bands and things like that, because thatâs kind of how I felt. But then I realized that you really have to learn to accept who you are and love who you are. Iâm really happy with my body type, and Iâm really proud of it. Obviously it works out for me. I talk about it all the time, how it was uncomfortable for someone like me to be in my body.â

Of course, Serena is so confident in her body than in 2011 when an official doping control agent showed up at her SoCal mansion to collect a sample as part of the out-of-competition testing, Serena locked herself in her panic room and refused to give a sample.

Recently from Author
← If Columba Bush Can't Converse in Engli...NYT: "Why Are Our [National] Parks So W... →
Hide 132 CommentsLeave a Comment
"Sports Fans Never Learn"
• 132 Comments
Commenters to Ignore
Commenters to ignore (one per line)

Save ListCancel
Endorsed Only
Trim Comments?
← If Columba Bush Can't Converse in Engli...NYT: "Why Are Our [National] Parks So W... →