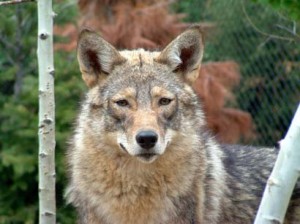 New-fangled coywolf: “You lookin’ at me?”

We’ve been told over and over that races do not exist among humans because there aren’t hard and fast lines between them. In contrast, we have the Endangered Species Act that is based on the scientific fact that species are cut and dried different.

Except … that this isn’t particularly true for (among other things) three types of animal that ought to be quite familiar to us: dogs, coyotes, and wolves. The federal government long treated the gray wolf as an endangered species, even though many years ago I used to have an obnoxious neighbor whose wolf-dog hybrid eyed my toddler hungrily at the playlot.

In Southern California, coyotes are medium-sized, solitary, and rather furtive. They skulk about with guilty looks on their faces. They can be trouble, but in general they lack Attitude. Yet, in the forested eastern half of the country, scary new coyote-wolf-dog hybrids are evolving that are big enough and self-confident enough to kill large prey, such as deer or folk singers.

In New England today, trees cover more land than they have at any time since the colonial era. … White-tailed deer are so numerous that they are often considered pests. And an unlikely predator has crept back into the woods, too: what some have called the coywolf. It is both old and new â roughly one-quarter wolf and two-thirds coyote, with the rest being dog. 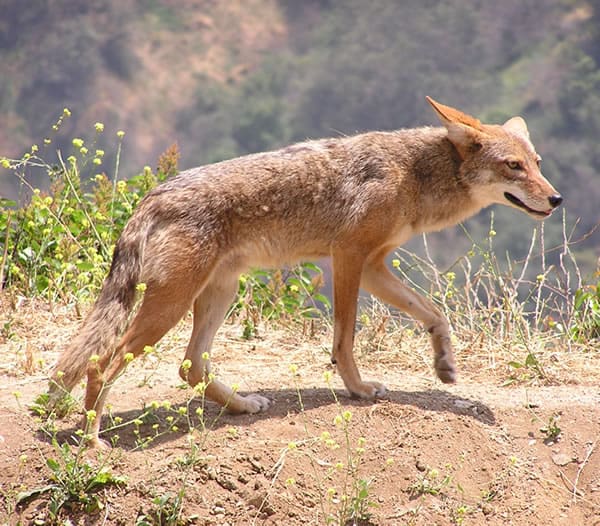 The animal comes from an area above the Great Lakes, where wolves and coyotes live â and sometimes breed â together. At one end of this canid continuum, there are wolves with coyote genes in their makeup; at the other, there are coyotes with wolf genes. Another source of genetic ingredients comes from farther north, where the gray wolf, a migrant species originally from Eurasia, resides. âWe call it canis soup,â says Bradley White, a scientist at Trent University in Peterborough, Ontario, referring to the wolf-coyote hybrid population.

The creation story White and his colleagues have pieced together begins during European colonization, when the Eastern wolf was hunted and poisoned out of existence in its native Northeast. A remnant population â âloyalistsâ is how White refers to them â migrated to Canada. At the same time, coyotes, native to the Great Plains, began pushing eastward and mated with the refugee wolves. Their descendants in turn bred with coyotes and dogs. The result has been a creature with enough strength to hunt the abundant woodland deer, which it followed into the recovering Eastern forests.

Coywolves, or Eastern coyotes, as White prefers to call them, have since pushed south to Virginia and east to Newfoundland. The Eastern coyote is a study in the balancing act required to survive as a medium-size predator in a landscape full of people. It can be as much as 40 percent larger than the Western coyote, with powerful wolflike jaws; it has also inherited the wolfâs more social nature, which allows for pack hunting. (In 2009, a pack of Eastern coyotes attacked and killed a 19-year-old Canadian folk singer named Taylor Mitchell in Cape Breton, Nova Scotia.) …

About 20 years ago my wife and I were visiting a huge estate in southern Wisconsin with a Frank Lloyd Wright mansion. I was off with our older son while she was minding the toddler. Suddenly, a beast appeared. Eventually she scared it off. Pure wolves are rare that far south, so it was likely some kind of coywolf with the personality of a wolf.

âWeâre kind of privileged in the last 100 years to watch the birth of this entity,â White told me, âand now the evolution of this entity across this North American landscape that weâve modified.â …

In the mid-20th century, the influential evolutionary biologist Ernst Mayr argued that species arise only when individuals become isolated somehow from others of their kind. …

The emergence of the Eastern coyote, however, shows how human activity can break down the barriers that separate species.

… Recent genetic analysis has highlighted, to a degree that is impossible to ignore, the fact that the barriers between species have never been impermeable. As Brendan Kelly, the chief scientist at the Monterey Bay Aquarium, told me: âThe dirty secret of biology is that the fundamental unit of science â i.e., species â in fact canât be adequately defined.â

This hasn’t exactly been a secret over the decades that the Endangered Species Act has shaky conceptual foundations. (Here’s my 2001 article about how the Trump National Los Angeles golf course was crippled by the assumption that the EPA would declare that the California Gnat Catcher was a different species than the Baja Gnat Catcher.)

And yet we somehow deal with the fact that the universe is complex when it comes to species, although not with races.

Recently from Author
← Media Trying to Spin Ferguson FiascoMichael Brown, Bully →
Hide 43 CommentsLeave a Comment
"Species Do Not Exist"
• 43 Comments
Commenters to Ignore
Commenters to ignore (one per line)