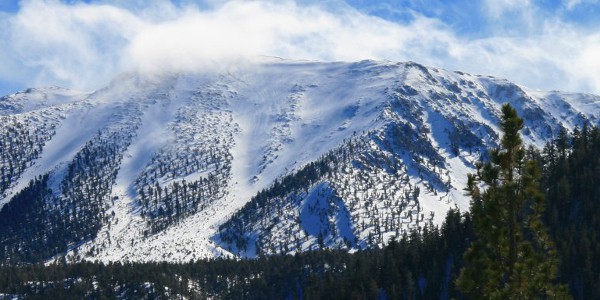 That skiing even exists in sunny Southern California is a curiosity due to the very high mountains hemming in the city to the north. Yet, skiing is a big enough deal in SoCal that a friend of mine from high school both bought a ski hill and then, after years of frustration due to poor snowfall as he was about to open it after the the immense snowfall of January 2005, as he was exultantly taking a last test run down his mountain, he hit a tree and died.

The strangest bit of SoCal skiing history was when Austrian Sepp Benedikter, who played ski instructors in movies, opened the Pine Needle Ski Slope in North Hollywood at the corner of Ventura and Lankershim Boulevards in the summer of 1939. He dumped 6000 sacks of pine needles on the northwest slope of Griffith Park above Universal Studios and Ginger Rogers and Gary Cooper skied down into the San Fernando Valley. I’d can’t recall ever hearing of this local lore before, but perhaps it’s the atavistic source of my dream about a glacier pouring out onto Ventura Blvd.

There are, I believe, currently five real ski mountains in Southern California. They typically have their bases at about 7,000 feet and top out at around 8200 to 8600 feet elevation. (By the way, there should be an automated system for conversions to metric measures. For your assistance, 3000 meters = 9850 feet, while 7000 feet = 2133 meters.)

Temperature falls 3.6 degrees F per 1,000 feet of elevation, so at 8,000 feet it’s 29 degrees cooler than at sea level. That’s cold enough to make snow during winter nights, and some winters get a reasonable amount of natural snow. For example, Snow Valley near Big Bear has 72 inches of snow at its summit right now after a cold February. But it’s expected to rain this week, which won’t help.

On the other hand, from Los Angeles it is only a five hour drive due north to the much better skiing at Mammoth Mountain on the east side of the Sierra Nevadas. The eastern Sierras are typically too jagged for skiing, but Mammoth is an extinct 11,000 foot volcano of more rounded shape.

Also, as noted by a hydrographer named Dave McCoy (now age 101) who was employed by the water department to ski around the Sierras and measure the depth of the snow, more snow falls on Mammoth than nearby due to some microclimate quirk. Mammoth currently has 150 inches of snow at the 8000 foot base and 225 inches at the 11ooo foot summit.

Mammoth is not quite a world class ski mountain compared to the powder resorts of Utah and Colorado, but it’s an easy desert drive from Los Angeles.

The one mountain where Southern California could have had a near-Mammoth quality ski resort is 11,500′ (3,500 meter) San Gorgonio northeast of San Bernardino.

The north face of San Gorgonio gets a lot of snow, keeps it into spring, and doesn’t appear too overwhelmingly steep on its prime north face for skiing.

It’s more like a Colorado Rocky than a California Sierra in shape. But it does get some big avalanches, such as one a couple of weeks ago.

Southern Cal’s other two main 10,000 foot peaks, Mt. Baldy and San Mt. San Jacinto are too steep on their huge north faces for skiing by non-experts. Ski mountains in the northern hemisphere have to face north to keep the sun from melting the snow. 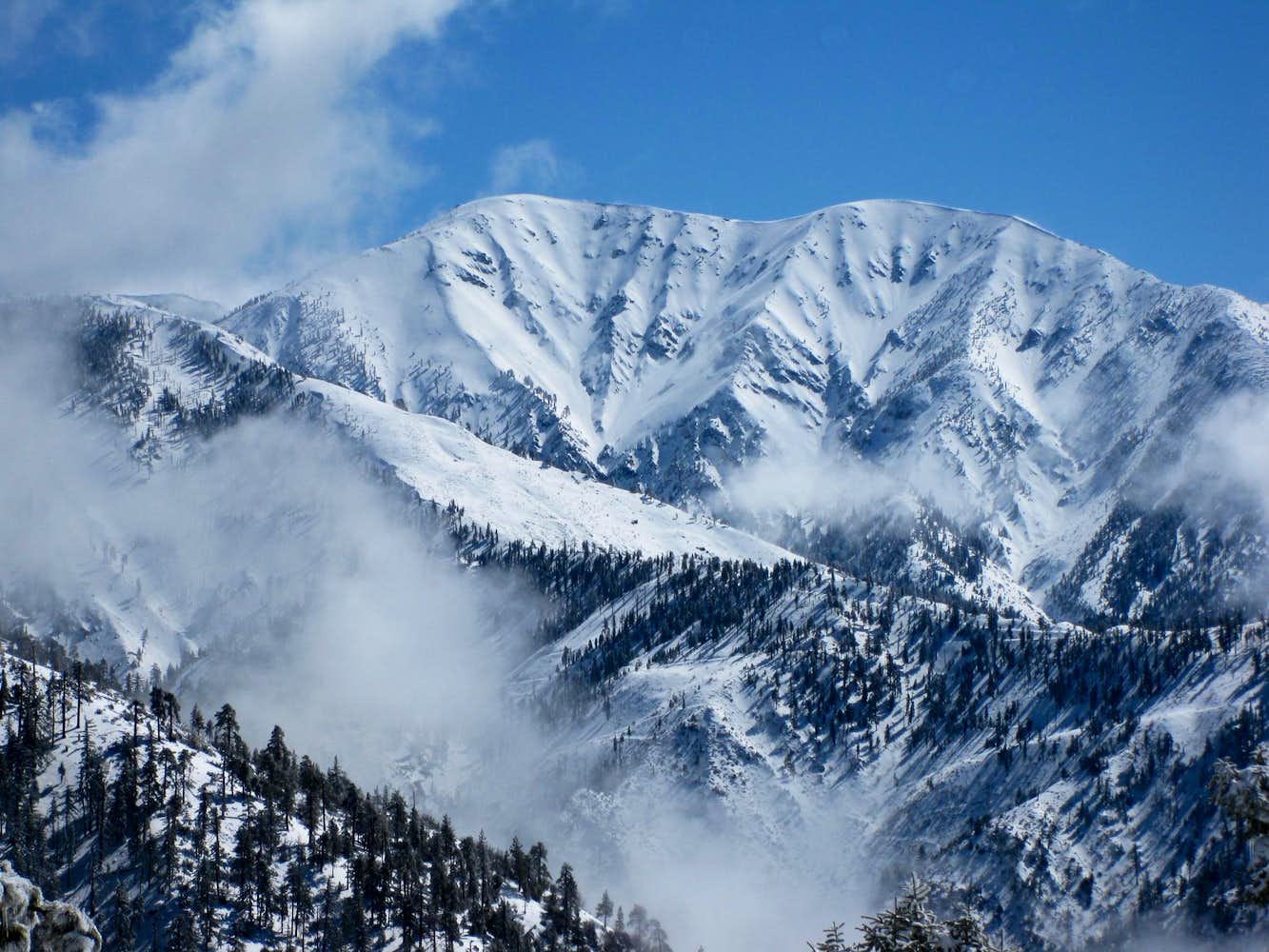 For example, here is 10,064′ Mt. Baldy’s north face. It gets lots of snow, but it’s too steep other than for adroit ski mountaineers. The north face of 10,831′ Mt. San Jacinto west of Palm Springs is even more immense, one of the most prominent peaks in the U.S.

San Gorgonio’s north face isn’t quite as suicidal to ski. Here’s a San Gorgonio video from May 1, 2010 to show the scale of “Old Greyback:”

San Gorgonio is also the finest high country wilderness in Southern California, with deep forest at 8,000 feet elevation, a couple of natural lakes (very rare in SoCal) at around 9,000 feet, and the top 1,000 feet or so are above the treeline. I climbed it three times in the early 1970s.

Whether to let San Gorgonio be developed into a ski mountain or make it a permanent wilderness was debated in Congress in the mid-1960s. Sports Illustrated ran a perceptive 1965 article on the debate, correctly seeing this as an early bout of a coming political struggle made inevitable by America’s rapidly growing population:

THE BATTLE FOR A MOUNTAIN

SPORTSMEN ARE FIGHTING SPORTSMEN IN THE CONFLICT OVER BEAUTIFUL, RUGGED MT. SAN GORGONIO, A LOFTY WILDERNESS NEAR LOS ANGELES WHICH CONSERVATIONISTS WANT TO KEEP WILD AND SKIERS LONG TO PENETRATE

…By early spring, when most of the range and the crests of the adjacent San Gabriel range have lost their kiss of snow, big San Gorgonio often still shines whiteâthe one true jewel of the lot. It is also the least spoiled today, because 34,718 acres of it above the 7,000-foot contour have been set aside by Congress as a wilderness area where there can be no road or building, or any use of land vehicles or planes. …

The battle is, in fact, only worth considering at this time because, sooner or later, similar fights will break out in other areas. … Now for the first time, on the high ground of San Gorgonio, we have sportsmen against sportsmen in a major fight.

The one real reason such a battle is taking place and that others will follow is that the U.S. population is becoming a burden. We are fast running out of room for working, decent living and playing. By present, crowded standards, almost all outdoor sports require an exorbitant amount of spaceâa large factory and housing enough for all its workers can be built in the same space needed by 18 men to play a game of baseball. In the U.S., east and west, there are wilderness tracts far larger and more precious than San Gorgonio, and there are other snowy mountains better for downhill skiing. San Gorgonio has become the first battleground of sportsmen simply because it is located near greater Los Angeles. In municipal Los Angeles and in the tangle of contiguous cities that lie with it under a blanket of smog, there are now more than 10 million people. The air they breathe on inversion days is only slightly better than the old foul breath of Pittsburgh. The particular virtue of the megalopolis is the complex of freeways by which ordinary men escape in their off time, some of them heading for the water, some for the deserts, some for the mountains, some for the ball parks and horse tracks, and many simply leaving home to find a louder jukebox playing a different tune. …

Through the whole argument the skiers have stressed one strong, logical point of the sort Congressman Kyl seeks. There is no doubt that if the high ground of San Gorgonio were opened up to skiing, the area would get far greater use than it does now. The sport of skiing flourishes in the U.S. wherever there are slopes, lifts and reliable snow close to heavily populated areas. On their side the skiers have the old and often valid doctrine of the greatest good for the greatest number. But weighed against this are two equally logical considerations. First, the American wilderness is disappearing, and we grieve already at its passing. Second, as soberly put in a committee hearing by a geologist named Barclay Kamb, “It is argued that the principle of the greatest good for the greatest number compels development because the downhill skiing facilities would attract so many more people than presently visit the area in its wilderness state. This claim takes us back to the basic question of values at the heart of wilderness preservation. It is like arguing that we should convert our churches to roller-skating rinks because that would get the attendance up.”

Eventually, Congress voted to include San Gorgonio in the new wilderness system, meaning it could never be developed for normal skiing.

To ski San Gorgonio this winter, you have to hike up. My impression is that the number of ski mountaineers in southern California, while not nonexistent, is tiny. As far as I can tell, it’s mostly a guy named Andy Lewicky and his pals. The good side of that is that, IIRC, fewer have died in avalanches in Southern California.

So practically nobody makes use of San Gorgonio in winter.

To keep fewer people from climbing San Gorgonio in summer, the Forest Service moved the trailhead back. When I climbed it first on July 4, 1971, the shortest way to the top was 16 miles and 3,750 feet of elevation gain. That took from 10am to 8pm of almost nonstop hiking.

Now, though to climb Mt. San Gorgonio is 21 miles and 4600 feet of gain. Why? The L.A. Times explained in 1989 that the government felt too many people were climbing the tallest mountain in Southern California, so they made it harder to make it more elitist:

… It’s unlikely, however, that you’ll be able to climb Mt. San Gorgonio and return in a single day. The Forest Service has relocated the trailhead, and what was once a long (16-mile) day hike is now a very long and very steep 21 miles.

“But that makes it impossible to reach the peak in a day,” you object.

Yep. Forest Service planners figure that foot traffic through fragile alpine areas will decrease if the great peak is harder to hike. And to the Forest Service, fewer hikers means fewer administrative problems and fewer rangers sent out on patrol. The Forest Service also figures that hikers will enjoy the new trailhead and that the day hike’s increased length will lead to increased solitude at South Fork Trail’s intermediate destinations: South Fork Meadows and Dollar Lake.

We respond to the pressures of a growing population by making life more elitist.

It’s interesting how the sensible arguments on both sides outlined in the Sports Illustrated article 54 years ago are kind of off-limits today because they touch on the sacred cause of immigration. The notion that immigration-driven population growth poses tradeoffs today is considered … HATE.