Snowpiercer is a sci-fi allegory directed by Joon-ho Bong in English with a mostly American cast.

Chris Evans of Captain America plays a rebel who looks just like Christian Bale, who fights his way to meeting the Dictator of the World, who is played by a very American actor. (I saw it without knowing who he would be, so I won’t mention his name here.)

A couple of South Korean performers steal the show, however, as a father-daughter pair of genius drug addicts.

Bong’s 2006 movie The Host holds the South Korean record for most tickets sold and this one set a national record for biggest opening weekend.

Set in 2031, 17 years after an attempt to arrest global warming has caused the Ultimate Ice Age, the only survivors are the passengers on board a train powered by a perpetual motion engine that allows it to roar around the snowy world nonstop.

Why does the train zoom endlessly around the frozen world instead of going some place well-insulated and staying there? 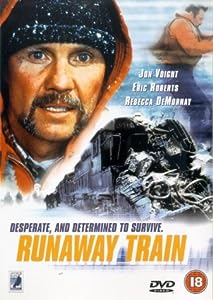 But most sci-fi movies are about doing things that, while difficult, sound, prima facie, like fun: fly like Superman, travel through time, visit planets around other stars, etc. Then the spoilsports explain why you can’t do that, but you willingly suspend disbelief because it would be cool to have a laser gun or whatever. In contrast, traveling nonstop around a dead world on a train forever is both impossible and seems like a pointless ordeal, so the movie hasn’t been very appealing outside of South Korea.

The movie starts out among the poor in the ultra-crowded last carriages, where everybody dresses like the slightly grotesque nice people in Road Warrior. Evans leads the impoverished rebels into the first class carriages run by the dictator’s emissary Tilda Swinton. These appear to have been borrowed from Brazil: somebody should add up how much influence Evelyn Waugh has had on science fiction.

A remarkable fraction of big budget movies these days are obsessed with themes of either Malthusianism, Darwinism, or eugenics, or all three. In Snowpiercer, the Dictator of the World apologizes at the end that he hasn’t had time for eugenics yet, so I guessed most of the Big Reveal at the end about an hour beforehand.

Then there’s a second surprise ending that I didn’t guess, but only because this one is pretty stupid. In the end, two individuals from races at the different ends of Rushton’s continuum go off to start a new human race presumably cleansed of racial division.

You can’t get there from here.

Is it a good movie? Snowpiercer has some cool elements, but the lack of even an attempt to justify rationally why it takes place on a train puts a lot of stress on the style to make up for the lack of sense, and it doesn’t quite have enough visual chops to pull that off. A movie entirely about moving from the caboose to the locomotive will be by nature linear and segmented, kind of like a submarine movie. That’s a challenge that sometimes inspires directors, but not quite enough in Bong’s case.

P.S., I think I figured out why this going around the world on a train movie was a giant hit in South Korea but not, so far, in the rest of the world: South Korea is a three-sided peninsula and the fourth side is mined.

In other words, you can’t go very far on any train that starts in South Korea. You can’t even get to North Korea, and that breaks the hearts of Koreans. The rail system is claustrophobic, so traveling around the world on a train sounds cool.

Recently from Author
← Soccer Not So Random After AllThey're Back! (Of Course, the Neocons N... →
Hide 67 CommentsLeave a Comment
""Snowpiercer""
• 67 Comments
Commenters to Ignore
Commenters to ignore (one per line)

Save ListCancel
Endorsed Only
Trim Comments?
← Soccer Not So Random After AllThey're Back! (Of Course, the Neocons N... →