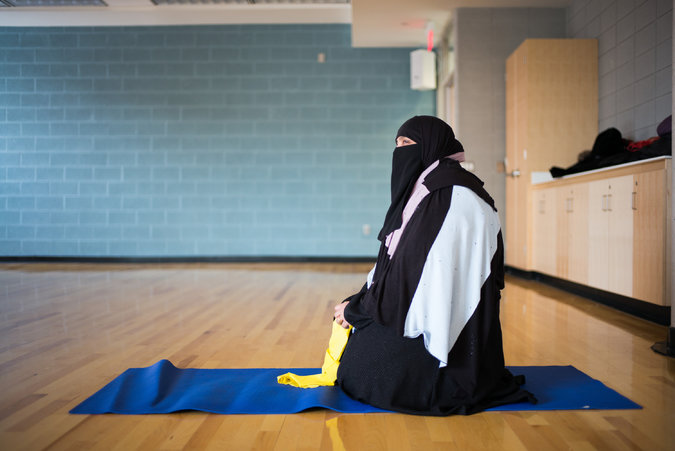 Raheema Majeed preparing for a yoga class for women. âYoga relaxes the mind and helps my breathing problems,â she said. Credit Ian Willms for The New York Times

In Toronto, a Neighborhood in Despair Transforms Into a Model of Inclusion
By DAN LEVIN FEB. 28, 2016

TORONTO â Her face framed by a yellow hijab, Idil Hassan watched her young daughter splash with other children at the Regent Park Aquatic Center, an architectural jewel of glass, wood and chlorine in the middle of Canadaâs largest housing project.

The center has given Ms. Hassan, a 34-year-old nurse, the ability to do something more than just watch her child: she, too, can join in.

On Saturday evenings, mechanized screens shroud the centerâs expansive glass walls to create a session that allows only women and girls to relax in the hot tub, swim laps or careen down the water slide, a rare bit of âmeâ time treasured by many of the neighborhoodâs Muslim residents.

âI wouldnât come before because my religion doesnât allow women to be seen uncovered by men,â said Ms. Hassan, a Somali immigrant. âItâs really helpful to have that day to be ourselves. I even learned to swim.â

Until not too long ago, the mention of Regent Park here in central Toronto brought to mind cockroaches and drug-fueled gang violence. It was an embarrassing stain on a progressive city that for decades had welcomed immigrants fleeing war, famine and poverty only to leave them trapped in an isolated collection of decrepit brick apartment blocks where crime and despair took root.

Hard lessons have been learned, and today, an ambitious rejuvenation plan for the 69-acre neighborhood, with the aquatic center as its centerpiece and a ring of condos that are helping to pay for new subsidized and affordable rental housing, is disrupting entrenched notions of class, race and religion at a time when concerns about income inequality and immigration are growing in the West.

As Canada accepts 25,000 Syrian refugees, the new Regent Park, thick with immigrants from Africa, Asia and the Caribbean, provides a blueprint for successful economic and cultural integration.

To some sociologists and urban designers, it also represents a scathing indictment of the meager efforts by New York, London and other cities that have failed to protect middle- and working-class residents from the displacement wrought by gentrification.

Even as Regent Park has been transformed by sleek glass condominiums and crisply designed townhouses, residents have been given the right to return after living in temporary housing while their apartment buildings were demolished to a new home in the neighborhood, regardless of their income level.

There are no âpoor doorsâ in the new Regent Park. Instead of apartment building entryways segregated by income level, the subsidized townhouses resemble the market-rate homes across the street, erasing the stigma of poverty. …

âYou have to make sure the people here who were disempowered gain their power and have their voice always acknowledged,â she said.

Grass-roots participation lies at the heart of Regent Parkâs billion-dollar transformation. From the start, the city and the developer incorporated residentsâ needs into the design, from ensuring they were not forced out of the neighborhood, to stocking food that met Muslim religious requirements, and scheduling private swimming and yoga classes for women. …

The aquatic center reflects that ethos of inclusion. After the weekly womenâs swim ends, the blinds stay down for a private session popular with transgender people who want to swim without feeling they are being stared at.

Out of the pool, everyone uses gender-neutral locker rooms that provide private cubicles for changing.

The design benefits families like that of Assiatou Diallo. As a single mother with a developmentally disabled 9-year-old son, Ms. Diallo finds that gender-neutral locker rooms let her help him change privately before his swimming lessons without making him feel awkward.

âNow we come here once a week, and heâs become so confident,â said Ms. Diallo, a refugee from Guinea.

New civic amenities like the pool are attracting Torontonians who would never have dared enter Regent Park just a few years ago. âIt seemed like the best-kept secret,â said Lisa Qwirke, 37, a research consultant, who often comes via streetcar from her neighborhood for her childâs swimming lessons. âThis is an example of community revitalization done well.â

Hawa Elmi, 55, a Somali refugee and mother of 11, began taking womenâs yoga classes three weeks ago. âMy Muslim friends told me to come,â she said on a recent afternoon before entering the mirrored studio. âHere nobody is judging anyone.â

Around two dozen women of various religions and ethnicities have joined, including Raheema Majeed, 49, a native of Sri Lanka who carried a blue exercise mat in a sack on her back and whose face â save for her eyes â was veiled by a black niqab. âYoga relaxes the mind and helps my breathing problems,â she said.

Across the hall, a pair of Chinese men were lifting weights in the gym, while down below, teenage girls in hijabs were shooting three-pointers into a basketball hoop with practiced ease.

Still, ghosts of the old Regent Park haunt the neighborhood, particularly in the public housing blocks that have yet to be demolished. Sally Beebee, 58, a Muslim immigrant from Sri Lanka, worries about using the stairwells in her building, where she says young men use and sell drugs.

The risks are especially high for young Somali men and boys in Regent Park. Aside from the perils of drugs, which have led to the sometimes violent deaths of dozens of Somali-Canadians over the past decade, the authorities worry about the lure of Islamic extremism, particularly from terrorist groups like the Islamic State and the Shabab, the Somali branch of Al Qaeda. …

âEveryone wants to be as Canadian as possible,â he said. âYou donât want people to know youâre Muslim, or an immigrant, or a black person. What they donât realize is being Canadian means being yourself.â

In trying to figure out whether this is the usual inanity or amusing satire, one problem is that a lot of the authors of both have names like “Dan Levin.” For example, in 2011 a writer named “Daniel Levin” penned for The Daily Beast a review of the late master parodist Umberto Eco’s last novel, The Prague Cemetery, a fictional account of the concoction of the Protocols of the Elders of Zion hoax. Daniel Levin’s review began: