To Prevent Another Ferguson, Vote in Georgia 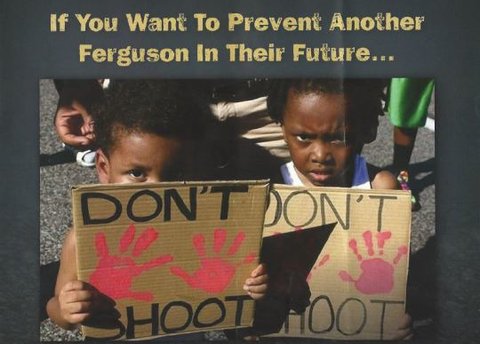 ATLANTA â Georgia Republicans are furious about a flyer just released by the state Democratic Party that invokes the shooting in Ferguson, Mo., as a new incentive for black voters to cast a ballot in the midterm election.

âIf you want to prevent another Ferguson in their future â vote,â the flyer says, over a photo of black children holding âdonât shootâ signs. âItâs up to you to make change happen.â

This is described as a âracial grenadeâ and âscaremongeringâ by the right-wing blog Hot Air.

âWhat does Ferguson, Missouri have to do with electing Michele Nunn to the Senate and Jimmy Carterâs grandson to the governorship in Georgia?â the blog post asks, and then supplies its own answer: Georgia Democrats want black voters to think their children might be shot if they donât vote for Ms. Nunn and Mr. Carter.

The flyer, though, makes a very different point, and a good one that applies in virtually all of the major races this year. The white domination of the mostly black city of Ferguson is the direct result of local residents not participating in the political system. If people donât like the results theyâre getting from their political leaders â whether itâs the makeup of the police department in a suburb or the refusal to raise the minimum wage in Congress â they need to step up and make their voices heard.

As the flyer says: âFerguson, Missouriâs population is 67% African-American. But the cityâs mayor, five of its six City Council members, and 94% of its police force are white. What are we going to do about it? If we want a better, safer future for our children, itâs up to us to vote for change. The choices may not always be perfect, but the cost of inaction is simply too great.â (It goes on to list the times and places for voting early in the election.)

This is hardly a grenade or racial pandering â in fact, it describes the essence of what political action is about. For too long, many of Georgiaâs Democratic voters have stayed home during midterm and state legislative elections, and the cost of that inaction has been high.

Maybe thatâs why the right wants to see this message suppressed.

It’s been obvious since the convenience store video was released on August 1 5, that the New York Times’ narrative about Ferguson was part of a Democratic get-out-the-vote-drive. In recent weeks, the evidence has become ever more overwhelming.

Will there ever be any accountability?

Solving the Police Problem
If They Don't Want to be Policed, Don't Police Them
Fred Reed
• 69 Comments • Reply
← Overlooked Engines of Re-UrbanizationIs African-American Studies a Front for... →
Hide 64 CommentsLeave a Comment
"Shamelessness"
• 64 Comments
Commenters to Ignore
Commenters to ignore (one per line)

Save ListCancel
Endorsed Only
Trim Comments?
← Overlooked Engines of Re-UrbanizationIs African-American Studies a Front for... →