From my new Taki’s Magazine column:

Slaughter in the Cities
Steve Sailer

Establishment voices are finally, grudgingly admitting that murders and shootings are up spectacularly in 2020. But the reasons, they all agree, are immensely complicated and rather boring.

Perhaps, they muse, it has something to do with lockdowns? Or there could be any number of other subtly interacting factors. Who can tell? In any case, this mysterious rise in violence is beyond the comprehension, much less the control, of politicians. For example, Nate Silverâs FiveThirtyEight headlined:

Trump Doesnât Know Why Crime Rises or Falls. Neither Does Biden. Or Any Other Politician.

So thereâs no reason to consider the sudden rise in slaughter in the cities when casting your vote this fall. Crime isnât something immediately threatening like climate change where voting matters. Instead, the rise and fall of crime is a vast, mysterious process, reminiscent of continental drift in its inevitability, which public policy and media opinion couldnât possibly affect. Indeed, wouldnât you rather read about some outrageous tweet by Trump than about this intensely tedious giant outbreak of gunfire?

Seriously, the current shooting spree in our cities is one of the simplest, most flagrantly obvious phenomena in the history of the social sciences. …

Hereâs the NYPDâs graph of shooting victims in New York City with 2019 in red and 2020 in yellow: 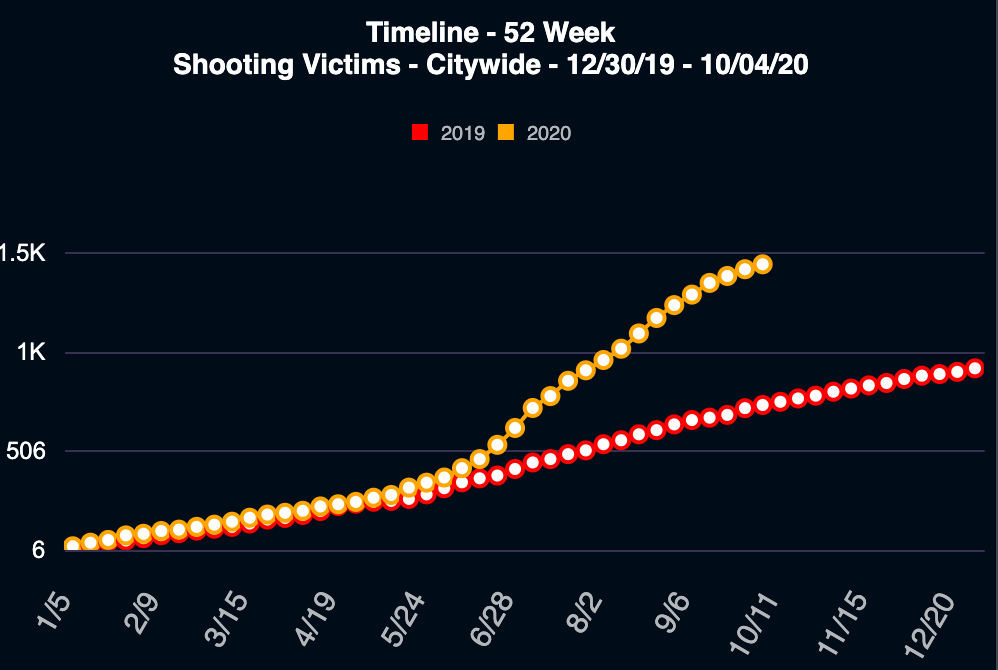 Recently from Author
← Deadspin: A More Successful Sportswrite...Is Trump Winning at Twitter and Losing ... →
Hide 99 CommentsLeave a Comment
"Sailer in Taki's: Slaughter in the Cities"
• 99 Comments
Commenters to Ignore
Commenters to ignore (one per line)