From the December, 1900 issue of Ladies Home Journal: 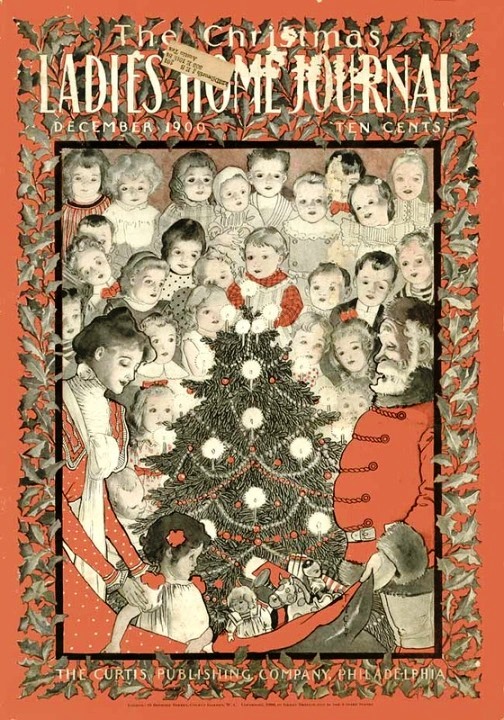 What May Happen in the Next 100 Years

Watkins was a technologist as well as the experts he talked to, so he tended to get quite a few things right, such as:

… Hot and Cold Air from Spigots.

Hot or cold air will be turned on from spigots to regulate the temperature of a house as we now turn on hot or cold water from spigots to regulate the temperature of the bath. Central plants will supply this cool air and heat to the city house in the same way as now our gas or electricity is furnished. Rising early to build the furnace fire will be a task of the olden times. Homes will have no chimneys, because no smoke will be created within their walls.

In other words, central heating and air conditioning, which, indeed, was common by 2000. On the other hand, the assumption of centralized production of hot and cold air was off. But who knows what 2100 will see: The first “district cooling plant” in Chicago’s Loop opened in 1995 and now provides air conditioning to 100 high-rises. The Gulf states are now big into centralized air conditioning via cold water.

In general, it’s hard to get the details right about the future.

Ready-cooked Meals will be Bought from establishments similar to our bakeries of to-day.

They will purchase materials in tremendous wholesale quantities and sell the cooked foods at a price much lower than the cost of individual cooking.

Not exactly much lower.

Food will be served hot or cold to private houses in pneumatic tubes or automobile wagons.

The meal being over, the dishes used will be packed and return to the cooking establishments where they will be washed.

Neither disposable paper plates nor hamburgers seemed to occur to the sages. John Lee Hancock’s 2016 movie about rise of McDonald’s, The Founder, has some brilliant scenes explaining the manifold elements of their system, such as putting the hamburgers in paper bags, which sounds obvious today but was brilliant in the 1940s.

But if you could fully figure out the supply chain of the future the way the McDonald Brothers did, you’d be making your fortune off it, not sharing it with some Ladies Home Journal writer.

Such wholesale cookery will be one in the electric laboratories rather than in kitchens. These laboratories will be equipped with electric stoves and all sorts of electric devices, such as coffee-grinders, meat-saws, potato-mashers, lemons squeezers, dish-washers, dish-dryers and the like.

Fast-food kitchens would seem like electric laboratories rather than kitchens in 1900. On the other hand, much of the food prep has been pushed upstream to factories, leaving the cooking to be done on-site simplistic in nature.

All such utensils will be washed in chemicals fatal to disease microbes, Having oneâs own cook and purchasing oneâs own food will be an extravagance.

Store Purchases by Tube. Pneumatic tubes, instead of stores wagons, will deliver packages and bundles. These tubes will collect, deliver and transport mail over certain distance, perhaps for hundreds of miles. They will at first connect with the private houses of the wealthy; then with all homes. Great business establishments will extend them to stations, similar to our branch post-offices of to-day, whence fast automobile vehicles will distribute purchases from house to house.

This has more or less happened, but nobody predicted that giant strawberries would lose their flavor:

Strawberries large as Apples will be eaten by our great-great-grandchildren for the Christmas dinners a hundred years hence.

This would be an outstanding prediction if it hadn’t already happened:

The living body will to all medical purposes be transparent. Not only will it be possible for a physician to actually see a living, throbbing heart inside the chest, but he will be able to magnify and photography any part of it. This work will be done with rays of invisible light.

Roentgen had invented the x-ray machine back in 1895 for which in 1901 he won the first Nobel Prize in physics. My grandfather was Roentgen’s delivery boy, bringing the great man what he ordered from the lens factory. Years later, my grandfather became an x-ray machine salesman, traveling to Asia and South America to sell hospitals their first x-ray machines. From demonstrating his machine by showing doctors the bones of his hand, he developed a long-lasting ulcer on the back of his hand. Oddly enough, this ominous radiation burn didn’t kill him: he lived to be 89.

How Children Will be Taught. A university education will be free to every man and woman. Several great national university will have been established.

Children will study a simple English grammar adapted to simplified English, and not copied after the Latin.

English language reform seemed like a sure thing in 1900, with the only question whether it would be Mr. Carnegie’s plan, Mr. Shaw’s scheme, or some other innovator’s.

Tracking, I believe, which is probably headed toward being abolished in the name of equity.

Poor students will be given free board, free clothing and free books if ambitious and actually unable to meet their school and college expenses.

It took a couple of world wars for the GI Bill.

Medical inspectors regularly visiting the public schools will furnish poor children free eyeglasses, free dentistry and free medical attention of every kind. The very poor will, when necessary, get free rides to and from school and free lunches between sessions. In vacation time poor children will be taken on trips to various parts of the worlds. Etiquette and housekeeping will be important studies in the public schools.

The last sentence, no.

Some things that were common in much of the world never happened in the USA:

There will be No C, X, or Q in our every-day alphabet. They will be abandoned because unnecessary. Spelling by sound will have been adopted, first by the newspapers. English will be a language of condensed words expressing condensed ideas and will be more extensively spoken than any other. Russian will rank second.

English is more extensively spoken or at least understood than any other second language, with a billion second language speakers, well over three times that of second language competitors like Standard Arabic, Hindi, French, and Mandarin.

The notion that Russian would be the world’s second language led to the meeting of President Obama’s parents in a University of Hawaii Russian class in 1960, but seems to have faded since then.

And yet, simplified spelling and grammar for English never caught on. As a child, I complained a lot about English’s irregular verbs and spellings. I can recall winning a speech contest around 1972 with a long series of jokes about how illogical the English language was. But when I was a kid, I read a lot of old books, so the idea of rationalizing the English language to make it easier for children and foreigners came naturally to me. As it turned out, nothing wound up being done to make English simpler, but it still triumphed.

I want to thank everybody who has contributed to this Christmas 2021 iSteve fundraiser to allow me to get cataract surgery on my eyes in 2022.

For those who havenât yet, here are nine ways for you to contribute to the December fundraiser:

This is not to say that you shouldnât click on Johnâs fund too, but, please, make sure thereâs a blue dot next to my name.