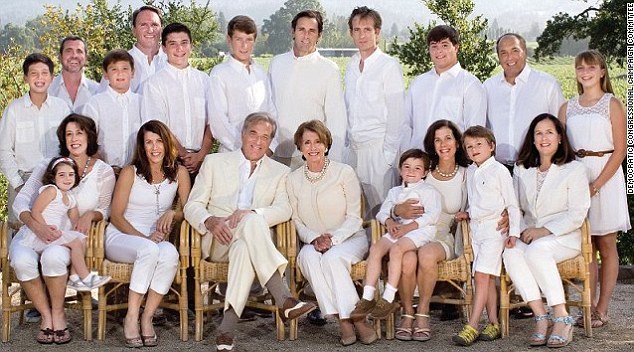 Pelosi: My Grandson’s Birthday Wish Was To Have Brown Skin, Brown Eyes; “Face Of The Future Of Our Country”

During an extended speech on the House floor Wednesday morning, where she read a long list of profiles of DACA recipients, Minority Leader Nancy Pelosi was reminded of her own grandson.

Pelosi, who noted her Italian heritage, said her grandson comes from Irish, English, “whatever, whatever” descent. She added that he is a “mix.” Pelosi shared that when her grandson blew out the candles at his sixth birthday party he made a wish that he would have “brown skin and brown eyes” like his Hispanic friend Antonio.

NANCY PELOSI: … He said yes, he made a wish. What is your wish? I wish I had brown skin and brown eyes like Antonio.

So beautiful. So beautiful. The beauty is in the mix. The face of the future for our country is all-American. And that has many versions.

Poor little self hating rich kid. Nobody ever told him itâs Okay to be white.

He can still go trans. Itâs better than nothing.

Yeah, but he can only go transgender like that wonderfully courageous Caitlyn Jenner, not transracial like that horrible Rachel Dolezal.

Recently from Author
← African-American History Month Unfoldin...Elderly Tourette's Syndrome Quote of th... →
Hide 117 CommentsLeave a Comment
"Pelosi: My Grandson's Birthday Wish Was to Have Brown Skin, Brown Eyes; "Face of the Future of Our Country""
• 117 Comments
Commenters to Ignore
Commenters to ignore (one per line)