From the NYT Magazine:

The Great Democratic Crack-Up of 2016

They may have a strong presidential candidate, but at every other level, the partyâs politicians and activists are fighting to survive â and fighting with one another.

Maryland might seem a peculiar venue for a blood feud over the future of the Democratic Party. It is the second-bluest state in the United States, after Massachusetts, according to Gallup; its registered Democrats, more than 30 percent of whom are black, outnumber registered Republicans two to one. Maryland is home to an immense federal work force and is one of the states most economically dependent on the federal government. Its gun-control laws are among the strictest in the nation. In 2012, Maryland and Maine became the first states to ratify same-sex marriage by popular vote. Barack Obamaâs statewide margin of victory was roughly 26 points in 2008 and 2012, the fifth highest in the United States. The last time the G.O.P. won control of the Maryland State Legislature was in 1897. So reliable is its party affiliation that, as a Democratic senatorâs chief of staff puts it, âIf Maryland ever becomes a jeopardy state, then the whole thing is gone.â 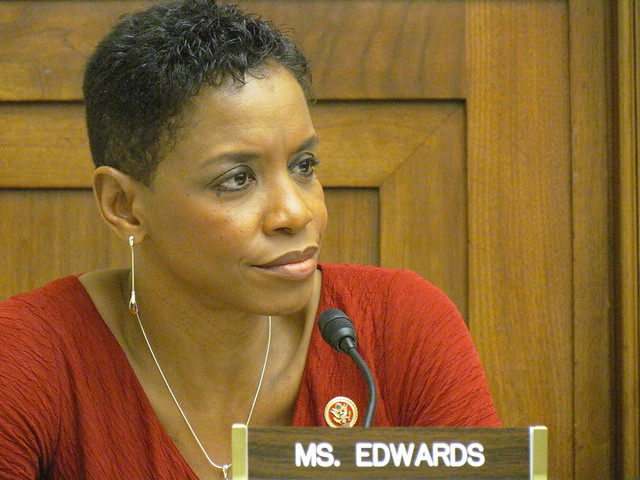 This past March, when Barbara Mikulski, the longest-serving woman in United States Senate history, unexpectedly announced that she would not be seeking a sixth term in 2016, national progressive groups quickly threw their weight behind their dream candidate: Donna Edwards. A pugnacious former community organizer, Edwards is a four-term African-American congresswoman from Prince Georgeâs County, one of the most affluent majority-black counties in the United States.

But she wasnât the favorite of establishment Democrats. For them, the obvious choice to replace Mikulski was the seven-term congressman Chris Van Hollen, who is considered a progressive like Edwards, but has a reputation for coolheaded practicality and for working well with Republicans. Of the bills sponsored by Van Hollen in the previous session of Congress, 37 percent included at least one Republican co-sponsor. For Edwards, the corresponding figure was 0 percent. Where she is viewed as a warrior for liberal causes, he is seen as a conciliator, one whose letâs-sit-down-and-talk-this-over geniality led to his tenure as chairman of the Democratic Congressional Campaign Committee from 2007 to 2011 and, thereafter, to his designation as the House Democratsâ point man on bipartisan budget discussions. As their lead negotiator, Van Hollen has immersed himself in the sort of legislative sausage-making that typically entails compromise, like his expressed willingness, in 2012, to consider restructuring Social Security as part of an overall deficit-reduction agreement. To progressives, this was nothing less than apostasy.

Also, Chris Van Hollen, who represents rich Montgomery County in Congress, happens to be just about the whitest man in America, Deep State Division. Van Hollen’s father was an aide to Secretary of State Dean Acheson and then American ambassador to Sri Lanka. His mother was the top Afghan analyst for the State Department. Van Hollen’s like the Matt Damon character in The Good Shepherd who gets questioned by mobster Joe Pesci over what his Old American people own: “The United States of America. The rest of you are just visiting.”

My guess would be that the Democrats benefit from still having as a public face of the party some number of this kind of old-fashioned hereditary princeling with direct family ties to the Truman Administration’s waging of the Cold War. Just as the Republicans celebrate any GOP politician they can find who is from somewhat outside the Core (e.g., Bobby Jindal, Marco Rubio, Ben Carson, Mr. Columba Bush, etc.), logic suggests the Democrats should conversely find it tactically prudent to look favorably upon a good-looking representative like Van Hollen of the East Coast’s ancient Dutch/WASP elite that produced the Roosevelts.

But symmetrical logic is distasteful to Democrats. Moral asymmetry is their engine. Holding together the Democrats’ Coalition of the Fringes by demonizing Privileged Straight White Males like Van Hollen is too much fun and to necessary to turn off just for tactical reasons.

Progressives, of course, love that Edwards is not a backslapping insider. She has vigorously advocated for many of their pet causes â minimum-wage increases, college-tuition debt relief, overturning the Supreme Courtâs Citizenâs United verdict so as to regulate corporate expenditures on political activity â that they maintain are popular with the public despite having failed to pass in Congress.

They also see her as a model progressive in another sense: Edwards is not a white male. …

Shortly after Freddie Gray died after being injured while in police custody in Baltimore, Edwards told me: âI reacted to what happened from my perspective raising a young black son in an environment thatâs complicated. And one of the voices thatâs so important but thatâs been missing are black moms who are raising their children and worrying about whatâs happened to our communities.â …

Van Hollen nonetheless enters the race as the front-runner, owing to his legislative accomplishments and to his extensive fund-raising connections as the former chairman of the Democratic Congressional Campaign Committee. But Thomas Schaller, a University of Maryland, Baltimore County, political-science professor, says: âAny financial advantage by him will probably be evened out by the sweat equity of progressive grass-roots volunteers. So resourcewise, this is a draw. The differentiator will be policy stuff. Her people are probably going to be poring over every committee vote and every statement to see where he was siding with Wall Street. The Van Hollen people will be doing the same thing. And sure, race is always a factorâ â a factor, Schaller said, that would help Edwards in black-dominated counties but hurt her in the rural stretches of western Maryland and along the Chesapeake Bay, with emerging neighborhoods of Asian and Latino voters potentially proving decisive.

As I’ve been saying, a major political question is whether Asians and Latinos will view the GOP more as the resented White Party or the Democrats more as the worrisome Black Party?