For centuries, skin color has held powerful social meaning â a defining characteristic of race, and a starting point for racism.

âIf you ask somebody on the street, âWhat are the main differences between races?,â theyâre going to say skin color,â said Sarah A. Tishkoff, a geneticist at the University of Pennsylvania. 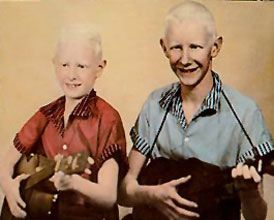 That’s why everybody confuses white albinos (such as rock stars Edgar and Johnny Winter) and black alibinos, such as model Diandra Forrest (shown below with her baby).

I said way back in 2000 in a VDARE article “Seven Dumb Ideas about Race:”

Race is only skin deep.

I’m sure this bit of conventional wisdom is most comforting to Jews suffering from Tay-Sachs disease, to bla 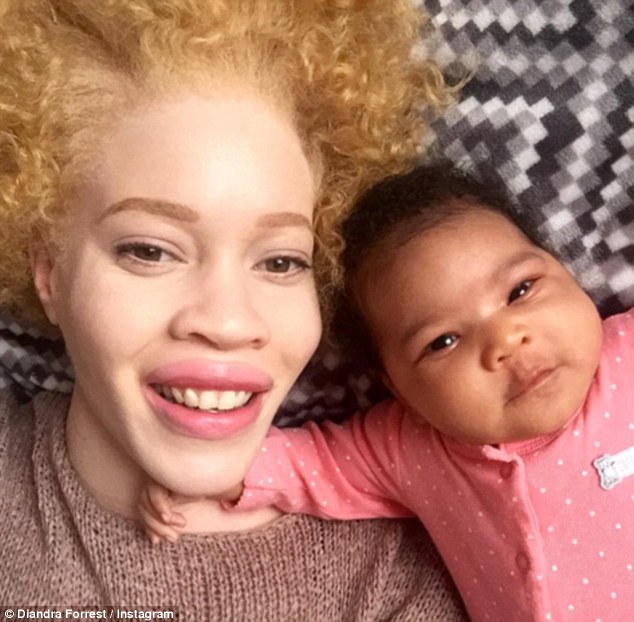 cks enduring sickle cell anemia, and to American Indians battling alcoholism. In reality, there is absolutely nothing that restricts racial differences to “mere cosmetics.” Races can differ in any of the ways that families can differ from each other.

Why? Because a racial group is a partly inbred extended family.

Race is basically about who your ancestors were and thus who your relatives tend to be.

Nobody, not even Tiger Woods, has a wholly random family tree. If you go far enough back into your ancestry, you find more slots open than there were individuals alive at the time. For example, 40 generations back, you family tree has openings for more than trillion ancestors. Obviously, some people wound up doing multiple duty. You are more descended from some people than from others.

Back to the New York Times’ all-out attack on a strawman:

On Thursday, Dr. Tishkoff and her colleagues showed this to be a profound error.

In the journal Science, the researchers published the first large-scale study of the genetics of skin color in Africans. The researchers pinpointed eight genetic variants in four narrow regions of the human genome that strongly influence pigmentation â some making skin darker, and others making it lighter. These genes are shared across the globe, it turns out; one of them, for example, lightens skin in both Europeans and hunter-gatherers in Botswana. The gene variants were present in humanityâs distant ancestors, even before our species evolved in Africa 300,000 years ago.

The widespread distribution of these genes and their persistence over millenniums show that the old color lines are essentially meaningless, the scientists said. The research âdispels a biological concept of race,â Dr. Tishkoff said.

… To find the genes that help produce pigments, scientists began by studying people of European ancestry and found that mutations to a gene called SLC24A5 caused cells to make less pigment, leading to paler skin. Unsurprisingly, almost all Europeans have this variant.

âWe knew quite a lot about why people have pale skin if they had European ancestry,â said Nicholas G. Crawford, a postdoctoral researcher at the University of Pennsylvania and a co-author of the new study. âBut there was very little known about why people have dark skin.â Since the early 2000s, Dr. Tishkoff has studied genes in Africa, discovering variants important to everything from resistance to malaria to height. African populations vary tremendously in skin color, and Dr. Tishkoff reasoned that powerful genetic variants must be responsible.

Eh … terms like “vary tremendously” are subjective. I’d be more inclined to say “vary somewhat.” A lot depends upon how much weight you give to the rare but fairly different Bushman/Hottentot racial group, who tend to have a yellow tinge to their brown skin. But, note that very, very few African-Americans (whom NYT subscribers automatically assume we are talking about) have significant Bushman ancestry, so this can be a red herring.

Just about everybody in Africa who is an ancestor of African Americans ranges from very dark brown to medium brown to light brown in some regions with obvious Caucasian intrusion from the North like the Sahara and parts of Ethiopia (as the NYT admits below).

The eight gene variants that Dr. Tishkoff and her colleagues discovered in Africans turned out to be present in many populations outside the continent. By comparing the DNA of these people, the researchers were able to estimate how long ago the genes appeared. They turned out to be immensely old. A variant for light skin â found in both Europeans and the San hunter-gatherers of Botswana â arose roughly 900,000 years ago, for example.

Even before there were Homo sapiens, then, our distant forebears had a mix of genes for light and dark skin. Some populations may have been dark-skinned and others light-skinned; or maybe they were all the same color, produced by a blend of variants.

Living humans come packaged in a wide range of hues â from pale and freckly in Ireland to dark brown in southern India, Australia and New Guinea. Researchers have argued that these varying colors evolved partly in response to sunlight. …

The new genetic evidence supports this explanation, but adds unexpected complexity. The dark-skinned people of southern India, Australia and New Guinea, for example, did not independently evolve their color simply because evolution favored it. They inherited the ancestral dark variants Dr. Tishkoffâs team found in Africans. âThey had to be introduced from an African population,â said Dr. Tishkoff.

Yet the same is true for some of the genes that produce light skin in Asia and Europe. They also originated in Africa and were carried from the continent with early migrants.

It would have been helpful to proto-humans to have multiple genes for skin color if their lineages moved back and forth between dwelling in deeply shaded forests and in open country. Africa has both.

As Africans moved into Europe and Asia, they interbred with Neanderthals on several occasions. Last week, Michael Dannemann and Janet Kelso of the Max Planck Institute for Evolutionary Anthropology in Germany reported that people in Britain still carry a number of Neanderthal variants that color skin.

… Dr. Tishkoff and her colleagues found it frequently not just in Europe, but also in some populations of lighter-skinned Africans in East Africa and Tanzania. Studies of ancient DNA recently discovered in Africa point to an explanation. Several thousand years ago, it seems, a migration of early Near Eastern farmers swept into East Africa.

Abyssinians of the Ethiopian highlands believe they are descended from the son of the Queen of Sheba who was, presumably, from the Arabian peninsula.

In the Atlantic, Ed Yong compromises, starting with the science and withholding the anti-crimethink agitprop to the end.

Recently from Author
← Harvey MonahanHow Can This be? →
Hide 63 CommentsLeave a Comment
"NYT: "Genes for Skin Color Rebut Dated Notions of Race, Researchers Say""
• 63 Comments
Commenters to Ignore
Commenters to ignore (one per line)

Save ListCancel
Endorsed Only
Trim Comments?
← Harvey MonahanHow Can This be? →