For Trump, an America That Is Not a Nation of Nations
By JULIA PRESTON JULY 22, 2016

With all the political orthodoxy that Donald J. Trump tore up in his convention speech on Thursday night, he set aside a core tenet of the American narrative on immigration: that the United States is a nation of nations, built on the sweat and initiative of people who came from other countries.

Using even darker language than he had on the campaign trail, Mr. Trump did not include even a boilerplate mention of positive contributions by immigrants. He described foreigners who came to the United States illegally and became killers of American citizens and drug dealers. More forcefully than he had before, Mr. Trump said he would also impose new restrictions on legal immigration to protect American workers from lower-paid competition in the labor market.

Under his presidency, the American dream would be primarily reserved for Americans.

âThe American people will come first once again,â he said.

Trump’s Anti-American Hate Rhetoric is obviously modeled on Nazi documents like this one:

We the people of the United States, in order to form a more perfect union, establish justice, insure domestic tranquility, provide for the common defense, promote the general welfare, and secure the blessings of liberty to ourselves and our posterity, do ordain and establish this Constitution for the United States of America.

As we all know, that’s Not Who We Are.

Historians and legal scholars struggled to recall when a presidential candidate had departed so radically from the traditional view that Americaâs welcome for immigrants was a prime reason for its exceptional innovation and prosperity.

But if you keep repeating The Narrative over and over for enough decades, it can be shocking when some heretic doesn’t bow down to it.

That slowly began to change during the 1970s as cowboy movies faded and gangster movies rose. You can see a ham-handed early attempt to retcon American history to make Ellis Island immigrants central in the late Michael Cimino’s 1980 cocaine-fueled cowboy epic Heaven’s Gate, 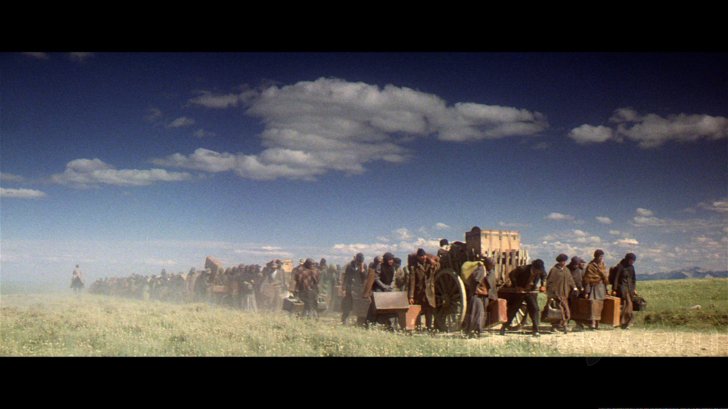 in which Wyoming is inexplicably full of vast columns of trudging Old World huddled masses:

Where are they going? Why are they in the middle of nowhere?

Martin Scorsese tried to pull off a similar ethnocentric rewrite of American history in his 2002 big-budget Gangs of New York. As I wrote in my review in VDARE:

By churning out countless Westerns in the mid-20th Century, Hollywood helped validate the idea that America was made by settlers, especially the cowboys of the Great Plains.

Around 1970, however, some brilliant young Italian-American directors and actors such as Francis Ford Coppola, Martin Scorsese, Al Pacino, and Robert De Niro asserted a new vision of American history. America, they implied, was made not by settlers, but by Catholic and Jewish immigrants, especially the gangsters of the big cities.

Gangster movies had long been popular for the same reasons as cowboy movies: both mobsters and frontiersmen live in a Hobbesian state of nature, beyond the reaches of the law. Their life is thus full of interest.

But the notion that 20th Century urban gangsters were central to American identity probably never occurred to anybody before âThe Godfatherâ films. Obviously, America had been around for a long, long time before Lucky Luciano got off the boat from Sicily. Indeed, historian David Hackett Fischer’s great book Albion`s Seed: Four British Folkways in America shows how much of American culture was transplanted intact from Britain in the 17th Century. Much of what’s distinctive about the American character today was already visible to de Tocqueville 170 years ago â before mass immigration began.

Scorsese, maker of Mean Streets and Casino, seems to have been bothered by this objection. So, he has spent over 30 years and more than $100 million to film the 1928 book âGangs of New Yorkâ to give his mobcentric theory of America some credibility by pushing it back to the mid-19th Century.

The film’s slogan: âAmerica Was Born In The Streets.â To Scorsese, who grew up in New York City’s Little Italy, the most important event of 1863 was not the Battle of Gettysburg, but the New York Draft Riots.

Personally, I don’t blame Cimino and Scorsese for their ethic loyalty. I think it’s natural and fairly healthy. But it’s also healthy for others to be allowed to notice patterns of ethnic bias and point them out. Fortunately, we can more or less make fun of Italian-Americans for their prejudices without our careers being in too much danger.

By the way, at the EphBlog, there are suggestions for some hashtags that would be sure to be denounced as “controversial,” such as #AmericanLivesMatter, #AmericansMatter, and #AmericaMatters. What do you think?

Recently from Author
← Channel-Surfing with the DonaldStephen Miller Discusses Trump Speech w... →
Hide 247 CommentsLeave a Comment
"NYT Complains Trump Doesn't Submit to the Narrative: "Under His Presidency, the American Dream Would be Primarily Reserved for Americans.""
• 247 Comments
Commenters to Ignore
Commenters to ignore (one per line)