← "Will No One Rid Me of This Troublesome...How Rubio Could Save His Campaign →
TeasersiSteve Blog
TeasersiSteve Blog
NR's Demand to "Machine-Gun" Trump "To the Floor" Is Just Metaphorical (I Hope)
Steve Sailer • February 24, 2016
• 500 Words • 184 Comments
Tweet
Reddit
Share
Share
Email
Print
More

… Far from being at the bottom of its fortunes, the GOP is in fact coming to the end of a long, slow, tough effort to rebuild after the disaster of 2008 â an effort that would benefit everybody involved if it could be completed. At present, the partyâs primary national problem is that it does not run the White House, and, therefore, cannot overcome the final constitutional hurdle to ushering in significant nationwide change despite its huge power in the House, its small advantage in the Senate, and its considerable presence in the states. If Donald Trump were to be the partyâs nominee â and if his being so were to do to both the presidential and down-ballot races what polling suggests it would â this problem would not be solved so much as reset from scratch.

As Avi Woolf pointed out yesterday, far from hastening the advent of real reform, the Trump movement is unconsciously channeling the strategy employed by Peter III in the Seven Years War: Namely, to give up just as there is a chance of a big breakthrough, and to hand full political control to the enemy as a result.

If the Trump contingent should succeed in this endeavor, the party would not emerge refreshed or improved; it would be summarily returned to where it was languishing back in early 2009. And if that should happen? Well, suffice it to say that it would be an unmitigated, unalloyed, potentially unsalvageable disaster. …

If I sound frightened or eschatological in my tone, thatâs because I am …

… Now is the time to throw everything at Trump, and to stop this disaster in its tracks. Will our children wonder why we were so reluctant?

Incidentally, when I say âeverything,â I really do mean everything.

Tomorrow night, as they stand on either side of Trump, Marco Rubio and Ted Cruz must find their resolve and all-but-machine-gun the man to the floor.

Note to NR readers: Please don’t forget the words “all-but” when you starting obsessing over the need to “machine-gun the man to the floor.” Mr. Cooke is talking about machine-gunning Donald Trump as a metaphor. 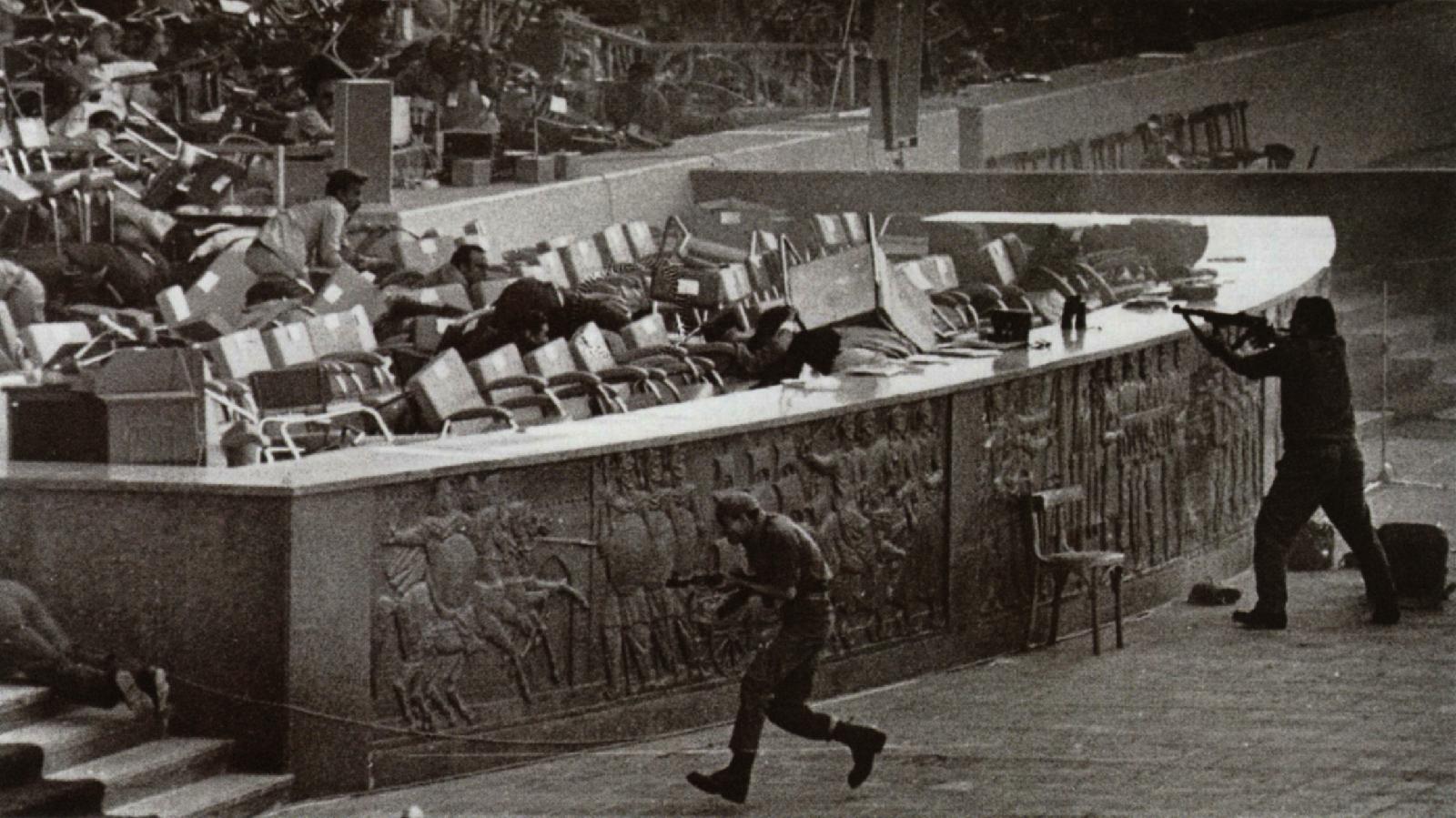 Machine-gunning Sadat to the floor, 1981

… Melt down the fences if you have to; we need long-range bombers here. … Why, moreover, are the men in charge of the big guns all-but flirting with the snipers on the other side? …

As of today, that answer is clear: The anti-Trump forces that still make up the majority of the Republican coalition must begin an expedited Manhattan Project, the sole aim of which is to bring down the front-runner piece by unpleasant piece. … Time to go nuclear, chaps.

Please, remember, all the calls for lethal violence against Trump in this essay are just intended as literary devices.

Recently from Author
← "Will No One Rid Me of This Troublesome...How Rubio Could Save His Campaign →
Hide 184 CommentsLeave a Comment
"NR's Demand to "Machine-Gun" Trump "To the Floor" Is Just Metaphorical (I Hope)"
• 184 Comments
Commenters to Ignore
Commenters to ignore (one per line)

Save ListCancel
Endorsed Only
Trim Comments?
← "Will No One Rid Me of This Troublesome...How Rubio Could Save His Campaign →