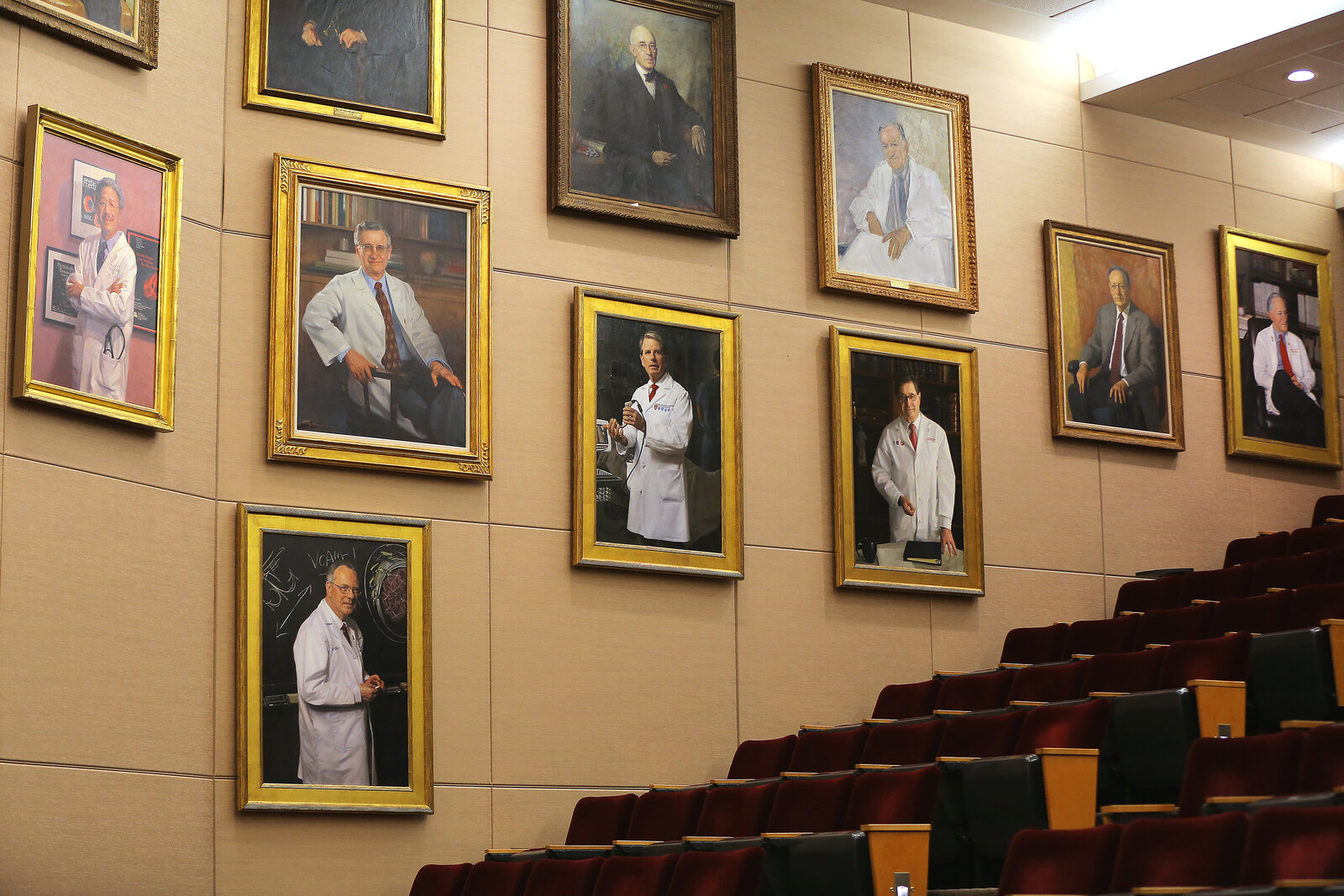 All the portraits hanging on the wall inside the Louis Bornstein Family Amphitheater at Brigham and Women’s Hospital in Boston on June 12, 2018 were of men, nearly all white. The portraits have since been removed.
Pat Greenhouse/Boston Globe via Getty Images

A few years ago, TV celebrity Rachel Maddow was at Rockefeller University to hand out a prize that’s given each year to a prominent female scientist. As Maddow entered the auditorium, someone overheard her say, “What is up with the dude wall?”

She was referring to a wall covered with portraits of scientists from the university who have won either a Nobel Prize or the Lasker Award, a major medical prize.

After all, what have winners of the Nobel Prize in Medicine or the Lasker Award ever done for humanity?

“One hundred percent of them are men. It’s probably 30 headshots of 30 men. So it’s imposing,” says Leslie Vosshall, a neurobiologist with the university and the Howard Hughes Medical Institute.

“I think every institution needs to go out into the hallway and ask, ‘What kind of message are we sending?'”

Uh … perhaps a message like: “Try to win a Nobel Prize or a Lasker Award. If you do, we’ll put your portrait up on the wall.”

Vosshall says Maddow’s remark, and the word “dude wall,” crystallized something that had been bothering her for years. As she travels around the country to give lectures and attend conferences at scientific institutions, she constantly encounters lobbies, conference rooms, passageways, and lecture halls that are decorated with portraits of white men.

“It just sends the message, every day when you walk by it, that science consists of old white men,” says Vosshall. “I think every institution needs to go out into the hallway and ask, ‘What kind of message are we sending with these oil portraits and dusty old photographs?'”

She’s now on a committee that’s redesigning that wall of portraits at Rockefeller University, to add more diversity. And this is hardly the only science or medical institution that’s reckoning with its dude wall.

At Yale School of Medicine, for example, one main building’s hallways feature 55 portraits: three women and 52 men. They’re all white.

“I don’t necessarily always have a reaction. But then there are times when you’re having a really bad day â someone says something racist to you, or you’re struggling with feeling like you belong in the space â and then you see all those photos and it kind of reinforces whatever you might have been feeling at the time,” says Max Jordan Nguemeni Tiako, a medical student at Yale.

He grew up reading Harry Potter books, and in that fictional world, portraits can talk to the characters. “If this was Harry Potter,” he muses, “if they could speak, what would they even say to me? Everywhere you study, there’s a big portrait somewhere of someone kind of staring you down.”

Do you ever get the feeling that today’s youth are strongly encouraged by our society to say things that make them seem mentally ill? This Yale medical student sounds like a character in an Edgar Allan Poe short story like the “Tell-Tale Heart.” Imagine a Poe story about the last scion of his ancient lineage, being driven mad by the portraits of his ancestors staring down accusingly at him.

Except in the 2019 version, he’s being driven mad because the portraits aren’t of his ancestors, but of somebody else’s ancestors.

Yale medical student Nientara Anderson recently teamed up with fellow student Elizabeth Fitzsousa and associate professor Dr. Anna Reisman to study the effect of this artwork; the results were published in July in the Journal of General Internal Medicine.

“Students felt like these portraits were not just ancient, historic things that had nothing to do with their contemporary experience,” says Anderson. “They actually felt that the portraits reinforced contemporary issues of exclusion, of racial discrimination â of othering.”

As T.S. Eliot pointed out:

Recently from Author
← As Toni Morrison Would Have Spelt It: E...Bret Stephens: "Call Me a 'Bedbug' to M... →
Hide 108 CommentsLeave a Comment
"NPR: "Harry Potter"-Reading Med Students Haunted by Portraits of Great White Male Scientists"
• 108 Comments
Commenters to Ignore
Commenters to ignore (one per line)

Save ListCancel
Endorsed Only
Trim Comments?
← As Toni Morrison Would Have Spelt It: E...Bret Stephens: "Call Me a 'Bedbug' to M... →