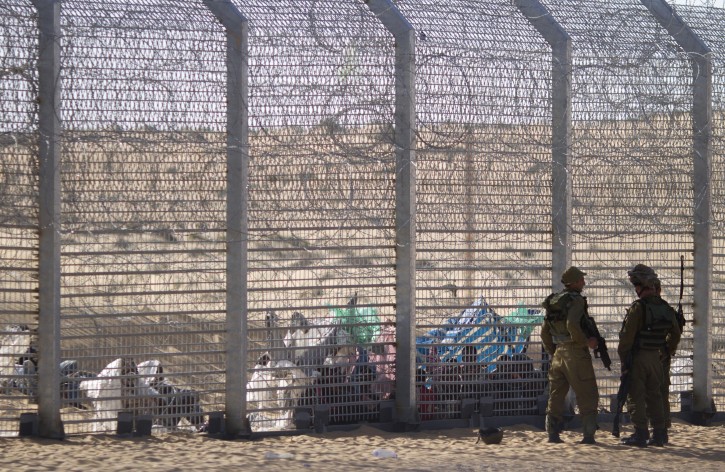 “African refugees sit on the ground behind a border fence after they attempted to cross illegally from Egypt into Israel as Israeli soldiers stand guard near the border with Egypt, in southern Israel, Tuesday, Sept. 4, 2012. (AP Photo/Ariel Schalit)”

Jerusalem – Israel is refusing to allow entry to a small group of African migrants huddled at a desert border fence with Egypt, officials said Wednesday, underscoring a toughened entry policy.

The Eritrean group appeared to number a dozen, including two women and a teenager, according to activists and an AP photographer who was at the site Tuesday.

They were crowded beside Israelâs new border fence, shaded by blue-striped plastic they hoisted above themselves. …

Israeli Interior Minister Eli Yishai said they will not be allowed in, because that would encourage more African migrants to make the trip.

âIf there were no fence there, and we were not determined (to stop the influx of migrants), then that number would become 1 million people,â he said.

Israel has almost completed a barrier along 200 kilometers (125 miles) of its border with Egypt to block African migrants and militants from the lawless Sinai.

Officials have also expanded the capacity of detention centers to ensure those entering are immediately held, said Cohen of the rights group.