A pretty good portrait of the culture that got the human race to the moon, from only a modestly tsk-tsking Current Year perspective, in the Washington Post:

… In archival Apollo 11 photos and footage, itâs a âWhereâs Waldo?â exercise to spot a woman or person of color.

âI donât want to be politically incorrect here, but the workforce, the culture, was white male. In the firing room, we had almost 500 people and we have one female, one black guy and one Hispanic,â says Ike Rigell, 96, chief engineer and deputy director of launch vehicle operations at the Kennedy Space Center in Central Florida. âThat was the culture.â

… He calculates that âevery hour of spaceflight required more than 1 million hours of work on the ground.â

“We were in a race with another country, an adversary. That was what the whole thing was about,â says Jim Ogle, who worked in McDonnell Douglasâs Saturn electronics division and was stationed in the firing room the July morning of the launch. âRussia had beaten us into space. The decision was we had to beat them.â

As Tom Wolfe said: single combat, our best vs. your best, our David vs. your Goliath (or, to be fair to the under-resourced but scrappy Soviets, the reverse).

A heck of a lot better than a nuclear war.

The space program imagined the future. Yet the community of trim haircuts, shaved chins, white shirts (with contractorsâ company badges emblazoned on their pockets) and pressed slacks, led by many veterans of World War II, seemed decades removed from the prevalent culture that was shaggier, angrier and sometimes stoned. …

1969’s stereotype of long-haired radicals was more like a small percentage of the country. I lived 6 miles north of the center of the rock and roll industry on the Sunset Strip, and life daily still looked much like 1965, just with more lime green and orange and more collar-length hair. It really took until perhaps 1973 for the Sixties to become the Prevalent Culture nationally.

In 1966, Frances âPoppyâ Northcutt was hired as a âcomputress,â a title that sounds as though she was a female machine. …

When Northcutt was promoted after more than a year, her salary spiked to $150 a week, a raise of 60 percent. She became a return-to-Earth specialist, calculating the mission trajectory â her degree is in mathematics â and became the first woman in a technical position in Houston.

More often, women were employed as secretaries. Before email, correspondence had to be typed by someone, and with multiple carbon copies.

… âTyping orders for managers, we had to be perfect. No Wite-Out. When you were preparing for a launch, there was an endless amount of paper coming in.â

Judy Wyatt served as secretary to George Low, the manager of the Apollo Spacecraft Program in Houston. (He was named NASA deputy administrator in December 1969.) âI was the early girl,â says Wyatt, one of three secretaries who took dictation and typed his letters (both at 120 correct words per minute) from 8 a.m. to 4 p.m.

… Women also served on the medical staff. âAbout 30 percent of the computer programmers were women,â Northcutt says, like the women heralded in âHidden Figures.â At higher echelons? Not so much. …

It was a tumultuous year of change, yet women in the space program werenât permitted to wear slacks. Northcutt and Hirasaki were in their 20s, with long hair, and favored miniskirts. 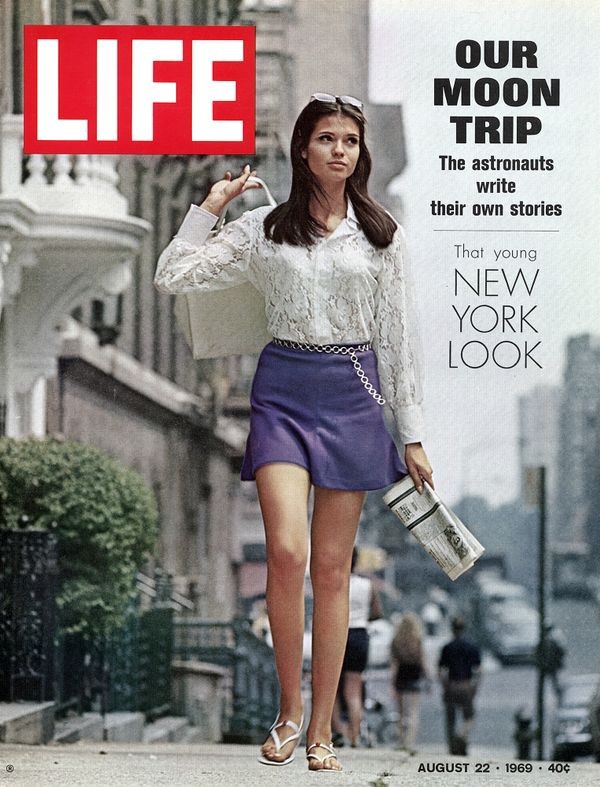 Long hair and a miniskirt was not at all a bad look.

Basically, in 1969 there were a giant number of Baby Boomer young women age 23 and under who were competing intensely with other women for the smaller number of high earning pre-Baby Boomer men over age 23. So skirts got shorter and hair got longer.

âThere were a couple of guys who were pretty âhandsy.â Nobody did a thing about it,â Hirasaki says. But ânobody was going to mess with Poppy. Theyâd ask her to make them coffee, and she would say, âMy ovaries do not uniquely qualify me to make coffee.â â …

They caroused with the same intensity they brought to the workplace. Launch parties after each mission were blowouts. âIt was fun,â Hirasaki says, echoing the sentiment of many engineers. âIt was really exciting. Everyone who wasnât in the program thought we were rock stars.â

Last year’s pretty good Neil Armstrong biopic “First Man” by Damien Chazelle depicts the astronauts as dedicated Family Men, but the reality is it was a pretty hard-partying age. Short-haired squares tended to have more fun back then than the liberated have today.

She lived in the Balboa apartment complex a couple of blocks from the Manned Spacecraft Center on Nassau Bay. Weekends were long parties. âWe had hootenannies in the apartments, 30 people sitting around singing songs by the Kingston Trio and Joan Baez.â She married neighbor and fellow engineer John Hirasaki, one of the few Asian Americans employed by the program. Ultimately, he was given a plum assignment as recovery engineer inside the Mobile Quarantine Facility, a converted Airstream trailer, with the flight crew and surgeon aboard the USS Hornet, 900 miles southwest of Hawaii in the North Pacific Ocean.

Work, so much work, became a challenge to family life.

âEngineers are different,â Jim Ogle says. âThey worked all those hours, then came home to the garage, building a sailboat, building an airplane.â Northcutt recalls that in Houston, âa lot of guys had sailboats, but they worked on their boats more than they took them out sailing.â

With work all-encompassing, âit took a real toll on the family environment. A lot of families just didnât survive,â Sieck says. âIt was long hours. You finally got a Saturday off, you played golf or went fishing or had an afternoon poker party with fellow worker friends.â Sunday, it was often back to work.

When people get married young, they don’t always make the right choices. Plus, they still have options in the sexual marketplace.

Also, there were all those 23-and-under female Baby Boomers around in their distracting miniskirts out to snag a high-earning man.

Especially in Florida. Cape Canaveral became the capital of kaput unions. The court was overwhelmed.

In Brevard County, 1,600 divorce cases were filed each year in the late 1960s, and 1,200 granted, Judge Volie Williams told a local publication.

Ike Rigell made sure that wouldnât happen to him. âI left my work at the space center,â he says.

âThat saved our marriage,â says Kathryn Rigell. âWhen we got him, he came home, he was daddy. He was Ike.â